In 2019, we will close the Wii Shop Channel used on Wii and Wii U, which has been available since December 2006.

Read this article for all the end dates for each service!

The Wii Shop Channel is your access point for purchasing and downloading new games and software from the Internet directly to your Wii console. When you visit the Wii Shop Channel you can choose between Virtual Console and WiiWare games as well as extra Wii Channels.

Virtual Console offers a treasure trove of gaming's rich history, featuring hundreds of classic titles from the following gaming systems from the past:

If it's all-new gaming experiences you're after, then WiiWare is just the ticket. WiiWare offers a collection of new games created with the unique control options of the Wii console in mind. This is where you will find titles from a wide variety of developers: from new talent looking for their big break to big publishers providing experiences that cannot be found in regular shops.

Apart from the Channels that are pre-installed on your Wii console, you can also download extra Wii Channels by visting the Wii Shop Channel. Browse the other pages in this section of the website and see what else is out there!

You can also use the Gift function to give a game or Wii software to your Wii Friends whose Wii console is set to the same country as your Wii console. Just use the 'Gift' option in the Wii Shop Channel and your friend will get a message saying you sent them a free download! 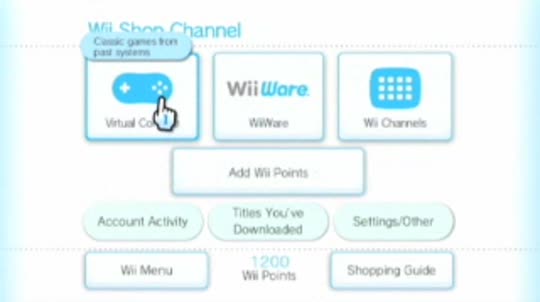 When you select Start Shopping you'll be presented with the three main categories: Virtual Console, WiiWare or Wii Channels. You can also add more Wii Points to your account, check your Account Activity, look up Titles You've Downloaded, check your Wii Points balance or use the handy Shopping Guide for a quick tutorial on how to use this Channel.

There are hundreds of Virtual Console and WiiWare games on offer, but finding a game is easy. You can browse through a list of Popular Titles or scroll through the Newest Additions to see the latest arrivals first. You can also search by Publisher or by Genre, or simply enter the Title of the game you are looking for. In case of Virtual Console titles you can also browse for titles for a particular System of your preference. This makes it easy to search for a specific Super Nintendo title, for example.

It's all in the details

By selecting any given title you will see details on which type of controller is required to play it, which age the game is suitable for, how many players can get in on the action, which languages the game can be displayed in, and choose whether to Download it for yourself or use the Gift option to surprise one of your Wii Friends.

You can easily store downloaded titles on an SD Card, but if for some reason you had to delete a downloaded title, you can simply select the feature Titles You've Downloaded and download them anew - at no extra cost, of course. You can also check here if any updates appeared for a title you already purchased.