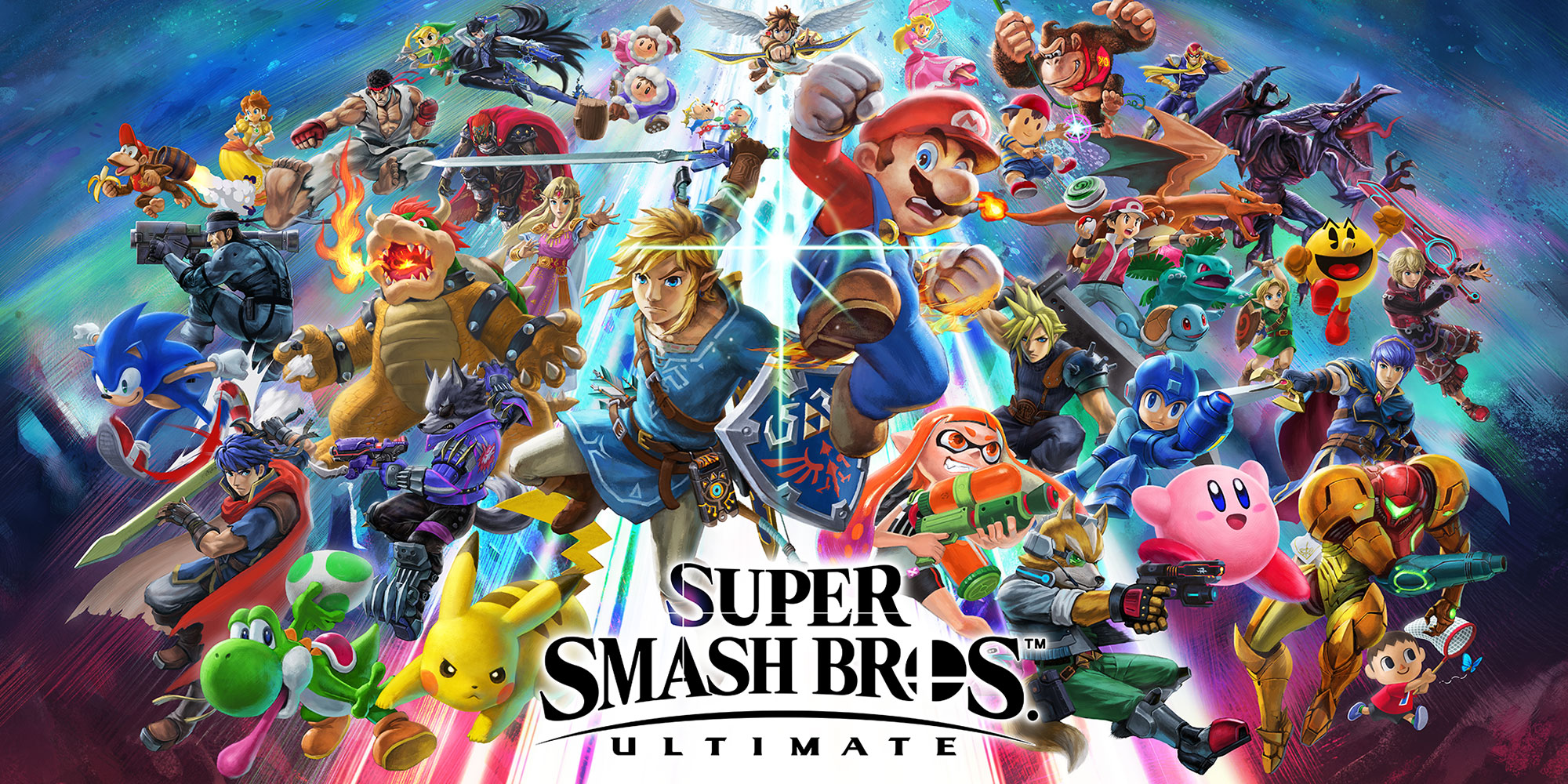 Now that the final fighter has been released for Super Smash Bros. Ultimate for Nintendo Switch, we’re taking a look back over the new fighter reveal trailers.

The Super Smash Bros. series is a project where we undertake collaborations you can’t see anywhere else. We wanted to use that opportunity and create nice content that people could enjoy, and that’s why we started making the fighter reveal videos.

It was a lot of work to make the videos while working on the game at the same time, but there were always big reactions from fans, so it was worth the effort. In this article, I’ll give some brief commentary as we go, so I hope you’ll enjoy looking back over all these videos.

Please take this opportunity to reflect on the history of the Super Smash Bros. series by watching the scenes where each new fighter first appeared. You may have seen some of the videos before, but they are well worth another look!

Check out part one for the Super Smash Bros. for Nintendo 3DS and Wii U fighter reveal videos!

This is the start of the Super Smash Bros. Ultimate videos!

This video was created with the intention to announce the game in a Nintendo Direct. Because of that there’s no reveal video for Inkling, but the Smash symbol with the cross in the circle appearing in Inkling’s eye was met with a tremendous reaction. And then to find out that it’s coming in less than a year!

This is the first fighter reveal video for Super Smash Bros. Ultimate. We might have made this first one the most serious of them all. I wanted to make the part where Ridley takes down Mega Man and Mario a bit more intense... However, we wanted to balance the scene, and so we made it very carefully, with many discussions with the international teams.

Vampire Killer is the name of Simon and Richter’s whip. This was a rather high production video, with a detailed art style overall, lots of guest characters, and even a brief glimpse of Dracula’s Castle. Richter comes to save Simon just in the nick of time, but unfortunately Luigi wasn’t so lucky…

We knew that there was a lot of demand for King K. Rool to join Super Smash Bros., so we decided to tease the viewers, making them think he was coming, before revealing it was a fake – and then showing that he is actually coming. King Dedede appears because, as with the other reveal videos, we were trying to mix in fighters from other series, to give a feeling of it being a collaboration.

The scene is straight from the Animal Crossing series, so there are no guest appearances from other fighters… The team didn’t have any experience in making Animal Crossing footage, so we did some research and recreated it in CG. It was made by Digital Frontier, as usual. I feel like we got pretty close, with the movements, camera angles and also the textures. What do you think?

We mixed together two reveals; the Echo Fighter Ken, and new fighter Incineroar. It’s literally a clash of fire against fire. It’s difficult to make a CG video with an Echo Fighter alone, so I’m glad we were able to do this. It also fit perfectly for a battle in the ring. Don’t you think both the CG part and in-game part are really dynamic?

The Piranha Plant reveal was an additional video for the early purchase bonus. So, there isn’t a CG part, only the in-game part. Piranha Plant isn’t included in the Fighters Pass, so you need to buy them separately. At the time, people were saying that they never expected Piranha Plant to join the battle.

This was the announcement video that revealed Joker as a fully-fledged fighter. The actual announcement was made with “Take Your Heart”. It was made with the concept of Joker sneaking into The Game Awards 2018 to steal a Super Smash Bros. invitation, so there were two sets of dialogue: one for The Game Awards, and one for the web version. The animated parts were made by Domerica, who also worked on the cutscenes in Joker’s original game.

Hero was announced at E3 2019, along with Banjo & Kazooie. Some time had passed from the release of the game, so you can see Dharkon here too. The part where all the different Heroes appear is really moving! This video also ran as an advert in some cinemas before the DRAGON QUEST movie in Japan.

With the Banjo & Kazooie reveal video, we were aiming for what’s called in Japanese comedy terms a “tendon” (in English, a “call back”), where we repeat the same joke again. In this case, we followed the King K. Rool video. It also helped us save costs. The reveal videos cost an unbelievable amount for DLC that’s on sale for just a few euros. The ending is, of course, inspired by the defeat of Gruntilda in the original game.

This is Terry Bogard’s reveal video, which anyone familiar with the NEO GEO system will surely not be able to watch without grinning. This is an in-house production from the BANDAI NAMCO Studios’ Super Smash Bros. team. A lot of the pixel art is new, but we tried to make the feel of the pixels and the method for zooming in and out close to that of the NEO GEO system.

This isn’t a character who smiles a lot in the original game, so we gave Byleth a really happy scene here... This video was made by the staff from the original game, Fire Emblem: Three Houses. The animated part was created by Sanzigen, and the in-game part with dialogue was made by Koei Tecmo. The two companies are connected by basically just one highway, but there were terrible traffic jams when we needed to have a meeting.

The reason Captain Falcon and Kirby are there is just because we thought it would work well. It’s in a drawn style, close to Little Mac’s reveal video, but actually it’s mainly CG. I think it brings more variation, including the screen effects. We were careful to check about the ramen restaurant where Min Min works while we were making it.

It was memorable how Twitter reacted at the time we released this video. Compared to other fighters, it doesn’t fit to make Steve do things, so we went with a surreal, funny approach, with an emphasis on space. The publisher’s stance was that both Steve and Alex are important, so for the in-game part we used both of them equally.

The movie FINAL FANTASY VII: Advent Children had a huge impact. For the reveal of Sephiroth joining Super Smash Bros. Ultimate, we created a high production video with the aim of achieving something close to that impact. As a result, there was an extremely large reaction, and the video is something you can really enjoy. It’s also the debut of Cloud’s additional Final Smash, Omnislash Ver. 5.

The CG part of the Pyra/Mythra reveal video is the only one where I didn’t write the plot. The cutscenes in the original game, Xenoblade Chronicles 2, were really good, so we asked the developers, MONOLITHSOFT, to take care of this video, including the planning. It was longer than I expected, but it fuses really well with the original game, and I think it worked out.

The Iron Fist of Darkness

Dropping his parents off a cliff would be right at the top of the list of things Kazuya would do! There’s a lot for the in-game part, so we aimed for the CG part to be simple and straightforward. It’s pretty close to the art style of the original game, including things like the textures. For the in-game part, we worked to make it feel like the original games at the beginning.

This is the last fighter to be revealed, so we went back to the beginning and made it a finale. Creating that many fighters in CG would have been a lot of work! Instead, we made the background black and plain, but I think this is the best way. The in-game part also came out really well. I think it’s a fitting end.

I’ve mentioned in an interview elsewhere about how I actually wrote two plots, but this is the way we chose to go.

We hope you enjoyed looking back on all of these reveal videos, alongside the comments from Mr Sakurai.

Through the Super Smash Bros. series, there have been reveals for so many new fighters. It was thanks to all of your support that we were able to add all these fighters and release these videos.

We hope you will continue to enjoy Super Smash Bros. Ultimate, now with the full roster of fighters revealed!

Find out more about the game at our official Super Smash Bros. Ultimate gamepage, or by joining our Smash Bros. Facebook community. You can also get updates by following @NintendoUKVS on Twitter.

Get ready for a high definition clash for the ages packed with famous characters in Super Smash Bros. for Wii U! Find out more