The presentation also revealed that 48 remastered courses from across the Mario Kart series are coming to Mario Kart 8 Deluxe! The Mario Kart 8 Deluxe – Booster Course Pass launches on March 18th with the first wave of eight courses, with all six waves arriving by the end of 2023. This paid DLC can be purchased separately, and will also be available to anyone with a Nintendo Switch Online + Expansion Pack membership at no extra cost.

Nintendo Switch Sports, a new iteration of the classic Wii Sports series was also announced, including six sports that can be enjoyed both locally* and online**. Nintendo Switch Online members will be able to sign up to participate in an Online Play Test taking place on February 19th and 20th. Visit this page for more information.

Fans eager to for news on Splatoon 3 were introduced to Salmon Run Next Wave, a co-op mode that will be included in the game, when it launches this summer. There was also new information on Kirby and the Forgotten Land with the reveal of Mouthful Mode, which gives Kirby a whole new range of powerful transformations to use in his upcoming 3D adventure!

It was also announced that the classic Japanese RPG LIVE A LIVE will be released for the first time ever in the west on July 22nd, presented in the same HD-2D style as TRIANGLE STRATEGY. And speaking of TRIANGLE STRATEGY, a new demo was revealed and released, featuring the first three chapters of the game ahead of its release on March 4th.

Things you can do right now!

*Additional accessories, games and/or systems may be required for multiplayer mode, sold separately.

Ink up the Splatlands in the next Splatoon game! Find out more

Kirby and the Forgotten Land 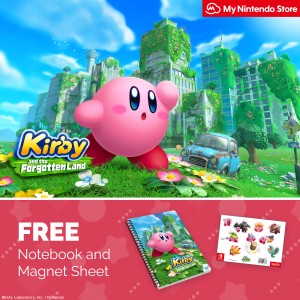 Pre-order Kirby and the Forgotten Land on My Nintendo Store and receive free gifts!

Get a free Magnet Sheet and Notebook while stocks last