Sine Mora EX is a side-scrolling shoot-'em-up that provides a unique challenge, where time is the ultimate factor. Find out more

Originally developed as a collaboration between Hungarian developer Digital Reality and Japan’s Grasshopper Manufacture, the new and improved Sine Mora EX launches on Nintendo Switch this year! We spoke to localiser and designer Brandon Sheffield and Executive Producer Reinhard Pollice to find out more about this unique time travel shoot-‘em-up…

Nintendo UK: Please could you give us a brief introduction to Sine Mora and what makes it different to other shoot-‘em-ups?

So that’s why when you get hit by bullets you don’t always immediately fail. You’ve got life that you can come back from. You’ll lose your power-ups and you have to chase them down, but you’re not immediately destroyed.

NUK: What else can you tell us about Sine Mora’s game mechanics?

BS: The time mechanics and the shield are both designed to make the game not casual, but friendlier. We want people to enjoy the chaos of a shooter without needing to have those absolute pixel-perfect skills. Although, of course, in the Arcade Mode, you do need those. But in the Story Mode, we just want you to experience what a shooter at this large scale can be. It’s still pretty chaotic; there’s a lot going on, but it’s hopefully not as punishing.

Also, in those kind of curtain-fire games, most of what you see on the screen is bullets, and you’re looking for the gaps to fly through. With Sine Mora we wanted you to spend more time looking at those awesome mech designs and backgrounds with statues crying waterfalls and cool stuff like that.

NUK: There are a few retro style shoot-’em-ups on Nintendo Switch already thanks to various Nindies and the ACA NEO GEO series. Sine Mora EX should sit well alongside these titles…

BS: I think it’s a good match for Nintendo Switch, because Nintendo fans tend to like that traditional game experience and if you go back to shooters that were on the Super Nintendo Entertainment System, many of them were horizontally scrolling like Phalanx or Super R-Type, so hopefully it kind of calls back some of that.

NUK: Within the shoot-‘em-up genre there are horizontal scrollers and vertical scrollers. It’s definitely true that each has its own feel and some people prefer one over the other. What do you think are some of the key differences?

BS: With a horizontal shooter if feels more like a dog fight, because you’ve got enemies that are aiming at you, rather than blasting a pattern out. A horizontal shooter to me seems more designed than a vertically scrolling shooter. My favourite horizontal scrolling shooter is Gate of Thunder for the PC Engine. And when you look at that game and you play it on easy or whatever, it’s one experience, and then when you play it on hard the enemies actually do different things. The enemies that dived at you before now actually shoot. Or you can see that they’re trying to pen you into this area. But also, having played multiple times I might know that there’s a power-up that’s down here, so I have to play well to get to that point. There’s some element of planning your route which I kind of enjoy. NUK: Brandon, as well as providing game tuning advice you were also deeply involved in Sine Mora’s script. Can you tell us more about your role?

BS: I did the naturalisation of the original Sine Mora. I wrote the English script, which was adapted from Hungarian. Digital Reality gave me a very rough translation. It was so rough that I decided that they should also give me the original script in Hungarian and I would machine translate it and compare the two docs and also ask a bunch of specific questions of the creative director, Theodore Reiker.

NUK: Sine Mora is known for having a complex story, particularly for a shoot-‘em-up. How would you summarise the plot in a couple of sentences?

BS: It’s hard! I would say it is the story of the end of a race of people who can move forward and backward through time. They’ve been hunted to extinction and basically used as an energy source and there are a few of them left in a resistance that are fighting back. This is the story of how they lose that war.

NUK: It’s so unusual for a shoot-‘em-up to push story so much, given their arcade origins.

BS: Well, a long time ago, well before it actually was in proper production, Sine Mora was intended to be an arcade game. It wound up being console first and that’s when Theodore, who himself was a writer and journalist in Hungary, had this sci-fi story that has been tumbling around his brain for a really long time and he was like, “I can do it”, and so he did it. There’s a lot of story, there’s a lot of reading and listening, and if you do pay careful attention to the story and play through the whole thing, there’s a lot of stuff to it that can be interesting. 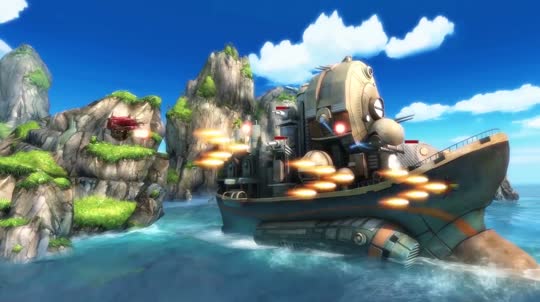 NUK: Do you think in some ways, that complexity in the story rewards repeat play so there’s something new to unpick every time?

BS: I would say you would definitely get more out of it with repeat play. With at least two play-throughs you would get what’s going on. But one of the issues with this story is that it starts out assuming you know what’s going on. So it's got the Enkies, those are the people who can move through time, but it doesn’t tell you what those are. And it assumes that you’re going to really be invested and find out what the story is about and it’s not necessarily a fair assumption for a game where you’re just trying to shoot stuff. But that’s why, if you play through it again, after you’ve gone through it all you might be like, “Oh I see what they’re talking about here.”

NUK: What’s one of the biggest challenges you encountered during localisation?

BS: There’s a really old Hungarian poem called In The Sieve Of Time, by Endre Ady, that had never been translated before and I thought, “This is a job for a PhD, not for me.” But Digital Reality were like, “Can you just give it a shot?”, so I did. So in the Attract Mode, there is Hungary’s most famous poem. Something that was only translated for the first time with machine translation and me, and it is still only published within Sine Mora. I was actually looking around through libraries and I found that a bunch of his stuff has been translated and put into English, but just not that one. But that one had to do with time and death, so it was really appropriate.

In The Sieve Of Time as it appears in Sine Mora

NUK: What are some of the changes and additions you’re introducing to Sine Mora EX?

Reinhard Pollice: There’s the Versus Mode. It’s like a small multiplayer mode that you can play with two players. And it’s basically small segments; one is about going at full speed and you have to shoot enemies and the one who survives is the winner, and the other is kind of like a ball game where you have to shoot a ball and bounce it so it hits the other player. These are designed for short play sessions because the Story Mode is more time consuming. You can play the Versus Mode for a short time but also, because it’s very challenging, you can play repeatedly and build up your skills.

Another change is a new difficulty setting. The original Sine Mora was quite difficult, so we worked on a Normal Difficulty Mode that’s not that hard, so that even entry level players could have an easy start.

NUK: You’re also adding a Co-op Mode, which is perfect for Nintendo Switch, because two players can share the Joy-Con. But obviously, the original game wasn’t designed around having two ships on screen at once. How did you handle that?

BS: Narratively, it doesn’t make sense to have two ships because the story is basically broken if there’s more than one ship on screen, because you’re the pilot and somebody else is talking to you from somewhere else, because they’re doing something else. The whole thing about this game is most of these actions take place simultaneously and so you wind up hearing the same conversation again because then you’re the other person that was involved in that incident.

So the second player essentially plays as a drone. It plays differently from the main ship as well. If it gets hit, it doesn’t have its own life bar, it loses you time. And it works pretty well, it’s about as natural as you can make it and it’s obviously fun to play games together. And you know, obviously with Nintendo Switch, players want to have multiplayer experiences that can be enjoyed on one screen or in tabletop mode.

Sine Mora EX is a side-scrolling shoot-'em-up that provides a unique challenge, where time is the ultimate factor. Find out more

A jam-packed summer of games awaits you on Nintendo Switch!

From comedic adventures to gripping murder mysteries, there’s something for everyone on Nintendo Switch this summer

Deadly Premonition 2: A Blessing in Disguise and 28 more games released this week.