Take a peek at how the Poochy & Yoshi’s Woolly World stop motion animations were made in our behind the scenes feature!

Have you watched the new videos featuring Yoshi and his pals that came out this month yet? There are 30 of these adorable animations available to watch in Poochy & Yoshi's Woolly World, a dyed-in-the-wool platformer coming to Nintendo 3DS family systems on February 3rd!

What’s interesting is that these animated shorts were created using a special method called stop motion animation. Today, let’s take a look behind the scenes to see what exactly goes into the production of these shorts.

Twelve frames for a single second

To produce stop motion animation, you position models by hand, take a photo, move them a bit, take another photo, and so on. You have to keep track of how Yoshi and the objects around him should be moving as you photograph frame by frame, so it’s a truly painstaking process.

12 photos are needed to create a second’s worth of animation. Put the above photos together and what do you get? 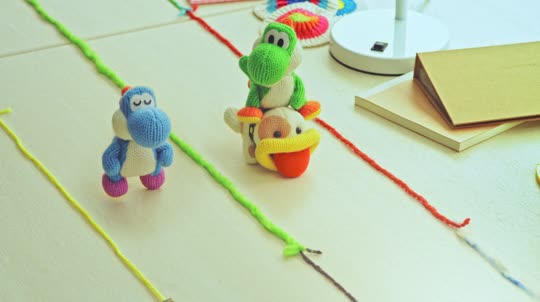 Voilà! Many hours of work were put into creating just this single second of animation. It seems like an overwhelming amount of work for relatively little pay-off, doesn’t it?

Let’s have a little look at what exactly goes on during the animation process, shall we?

This is the set where the animation takes place. With all the tools and equipment around, it gets kind of cluttered!

If you look closely at the photos, you’ll see that Yoshi and co. are held in place by metal clamps. These are called “rigs”, and they’re used to keep objects in the positions they need to be.

The many faces of Yoshi

During the shorts, you’ll notice that Yoshi has all sorts of different facial expressions. You might wonder how this is achieved…

Here are some of the parts used for Yoshi’s eyes. These are switched in-between frames to show minute changes in expression, blinking and so on.

Is he sad? Or sleepy?

The Yoshi featured in the shorts looks very similar to the Yarn Yoshi amiibo, but it’s actually a little different.

See how the arms and legs are longer? Also, there are metal joints embedded inside the stop motion Yoshi, making it quite stiff and heavy. Thanks to these joints, the animators are able to make Yoshi hold poses and move with precision.

Photographing frames, rigs and all

Here you can see the difference between the original photos and the versions used in the animation. The rigs used to keep things in place stay in the shot and are then edited out later. That’s right – stop motion may seem like a very old-fashioned method of animation, but it still happens to involve some state-of-the-art image editing!

Here’s an unedited clip we got our hands on to show you what the animation looked like during production.

A message from the production team

Here’s a message from Mr Minegishi at dwarf, who lent his expertise to producing these animations:

“Stop motion Yoshi acts in his own special way, a way that’s different to the Yoshi you typically see in games. We hope that players will enjoy seeing Yoshi in a brand new light.”

The game contains 30 different animated shorts. Each day you can watch a new one, so you’ll probably want to try to play at least once a day. You’ll also get quizzed on the movies you watch. Answer the questions correctly to get Beads that are sure to help Yoshi along the way!

The lovable Poochy, who features in the shorts, will also be getting his very own amiibo (sold separately or as part of a special bundle with Poochy & Yoshi’s Woolly World). It may not move like Poochy does in the animations, but by scanning it at any time during a course you can call Poochy to your side, letting you continue the adventure with a faithful companion.

So if you ever need a little break from platforming in Poochy & Yoshi’s Woolly World, why not check out the stop motion animated shorts?!

Check out some of the videos and find out more about the game at our official Poochy & Yoshi’s Woolly World website!

Poochy & Yoshi's Woolly World will be available in shops and as a downloadable version from Nintendo eShop on February 3rd 2017 on Nintendo 3DS family systems. At the same time, the Poochy amiibo will be released, both separately and as part of a software bundle with the game.

Unravel the info on Poochy & Yoshi's Woolly World at our official website!

Skul: The Hero Slayer and 41 more games released this week.

Pre-orders for the Nintendo 64 controller are now open for Nintendo Switch Online members!

Get yours ahead of launch on 26th October