6th March 2014 – With engines revving and gravity-defying courses awaiting, the Mushroom Kingdom’s finest racers are set to line up at the starting grid on 30th May when Mario Kart 8 launches on Wii U. But in the meantime, whether or not you know your Blooper from your Bullet Bill, Nintendo has today announced two options to get your karting skills up to speed in the form of the Mario Kart 8 Limited Edition software bundle – available for pre-order now – and a Super Mario Kart promotion coming to Nintendo eShop for Wii U on 27th March.

Mario Kart fans who have ever unleashed a Spiny Shell item or been on the wrong side of one will know of their capacity to make or break a race. Therefore as a memento of times both good and not so good, the Mario Kart 8 Limited Edition software bundle will come complete with a Spiny Shell Collector’s Item alongside a copy of Mario Kart 8, with the Spiny Shell proudly perched atop a black and transparent frame. Packaged together as a uniquely designed bundle, the Mario Kart 8 Limited Edition launches on 30th May 2014 and is ready for pre-order now from the Nintendo UK Online Store and selected retailers, available while stocks last. Customers in the UK & Ireland who have already pre-ordered the standalone copy of Mario Kart 8 will have the opportunity to upgrade pending availability. One of the most devastating items found in-game, expect to see the Spiny Shell back in its natural environment knocking champion racers off the podium when the item appears in the Mario Kart franchise once more from 30th May.

Meanwhile, for fans wishing to keep their kart tyres warm and reactions sharp before 30th May, the Super Nintendo classic Super Mario Kart* will release on Nintendo eShop** as a Wii U Virtual Console title on 27th March. As part of a promotion to celebrate both this legendary title and Mario Kart 8, fans who purchase Super Mario Kart until June 30th 2014 can get a discount of £5.49 on Mario Kart 8 if they purchase it on Nintendo eShop from the release of the game until June 30th, 2014, providing the purchase takes place on the same Wii U console.

As an added extra for those who pre-order – at retail – either the Mario Kart 8 Limited Edition software bundle or Mario Kart 8 as a standalone game, a selection of Mario Kart-themed keyrings will be available for fans from selected outlets. Whether satisfying a need for speed with the Golden Dash Mushroom, knocking over rival drivers with a Red Shell, or temporarily bulldozing through a course in the form of a Bullet Bill, the keyrings on offer will represent some of the most memorable items from the Mario Kart franchise.

In the UK & Ireland the Golden Dash Mushroom will be available for those who pre-order at Littlewoods and Very, whilst those pre-ordering via a selection of independent retailers*** will receive the Bullet Bill keyring. The Nintendo UK Online Store will be offering an exclusive Mario Kart 8 bundle which will include the Mario Kart 8 Limited Edition Spiny Shell bundle, a Bullet Bill T-Shirt and the Red Shell keyring****. GAME will be offering those in the UK who pre-order Mario Kart 8 a Wii U Super Mario Kart Racing Wheel. Gravity-defying courses and Mushroom Kingdom racers both old and new come together on 30th May when Mario Kart 8 launches on Wii U. To catch an accelerated glimpse of what lies in store, a new Mario Kart 8 Limited Edition CGI trailer is now available to view, featuring an appearance from the formidable Spiny Shell plus many a character you may have come to know over the years! 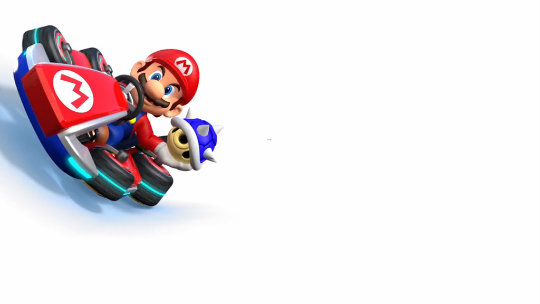 **Depending on the Wii U hardware pack you own and your use of it, an additional storage device may be required to download software from Nintendo eShop.

Mario Kart 8 on Wii U brings antigravity to the world of racing! Find out more

Start your engines for the original, legendary Super Mario Kart, which spawned a series that is still going strong today. Find out more

Operencia: The Stolen Sun and 27 more games released this week.

Whether you’re new to the series or just the latest game, our handy advice is sure to help!