Very few games combine golf courses, barbecues and vikings, but that's exactly what's on the menu in Swords & Soldiers II, coming soon to Nintendo eShop on Wii U from Ronimo Games. We sat down with the game's producer Robin Meijer to talk about what's in store for players.

Nintendo of Europe: Please introduce yourself for our readers, and explain your role on the team for Swords & Soldiers II.

Robin Meijer: My name is Robin Meijer, I’m a producer at Ronimo Games and I work on Swords & Soldiers II. That basically means I arrange a lot of stuff; I prepare things, talk to press and so on. My colleagues are all back home at the moment, working hard on the game.

NoE: What does someone who’s completely new to Swords & Soldiers II need to know about the game? Sounds like a sequel!

RM: It is a sequel! Well spotted! (laughs) Swords & Soldiers II is, at its very core, a 2D side-scrolling real-time strategy (RTS) game. We’re working on a really cool and diverse campaign for it, and we also really want to have an awesome local multiplayer experience.

NoE: It’s a real-time strategy game, but are there elements of other genres such as tower defence in there too?

RM: Well, you can build towers in the game, and you usually want to defend them, so that’s a bit like tower defence! But it’s mainly about building your units, who walk automatically. Normally in an RTS you go around clicking everything the entire time, but in Swords & Soldiers you build your unit and they start walking, and when they encounter an enemy they’ll start swinging their axe, or throwing their spears, and just generally start clobbering each other. They know what to do! And compared to other RTS games, it’s a lot more relaxed way of playing; if you make your army, you can just watch them go and do whatever they do, rather than, “Oh I have this super army that I have to micro-manage, and I also have to micro-manage my base, because it might not work and then I need another army as well.” So it’s a lot more fun to play - it basically takes out all the nasty and annoying bits from real-time strategy, and leaves the fun parts.

NoE: And the atmosphere reflects that as well, doesn’t it?

RM: Yeah, it’s colourful, and we hope that it’s funny. It’s not too serious – there are no grey space marines shouting away and bleeding out, it’s just happy Vikings fighting demons. Because that’s what Vikings do, and they battle demons because they also like to fight. And there’s a third, super-secret faction, that also fights. It’s what they do! And it’s a little bit comic book-style, which is kind of turning into the Ronimo vibe.

NoE: And there are barbecues of course.

RM: Yes, there are barbecues! The original game was all about barbecues, and the sequel does have barbecues, just as a part of the game. But I think barbecues are a perfect example of how we approach the game: it’s a serious game, but it doesn’t take itself too seriously. Why have a super-serious game about killing everyone and angry stuff, when you can also be like, “Hey, there’re demons on my golf course! That’s not cool, just clear them out!” It’s a lighthearted approach to serious battle.

NoE: Can you tell us a bit about the story?

RM: There’s a campaign mode with a bunch of missions, and we really want to make those as diverse as possible. So every mission is unique, with a different tech tree, units, and spells. I can’t say too much about it, but basically, after the original game the Vikings go back home, and everything’s good and happy. Redbeard’s still fighting with Blackbeard, because that’s just what they do. It’s fate! Everything is good and well in happy Viking land, when suddenly: demons. They’re like, “Hey, what’s this?” and they start ruining stuff, and that’s not too cool. So Redbeard starts fighting demons, and then they go on a crazy adventure, and eventually it turns out that the world needs some serious saving.

NoE: And do those two mortal enemies have to team up? Or can you not say?

RM: (pause) I can say… but I’m trying to think, “Do they team up?” (laughs) I’m afraid you’ll have to play the game. (laughs) But seriously, Blackbeard is a really bad guy; he’s not the kind of guy that you go, like, “Oh, let’s be friends.” No! The guy is just a bad guy.

NoE: On the subject of adversaries, what can you tell us about the multiplayer mode?

RM: We have a local one-on-one skirmish mode, and that’s pretty awesome, because one of the players plays entirely on the Wii U GamePad, and the other one plays on entirely on the TV. Normally when you’re playing a real-time strategy game in split-screen, you’re like, “I can see what you’re doing… that’s a pretty smart move, but if you look at my screen, you’ll see me countering it.”

We actually did some tests with regular split-screen, and it’s just a lot more fun with players on separate screens.

NoE: What can you tell us about the touch controls on the GamePad?

RM: You can control pretty much the entire game without ever touching the other controls; the whole game is playable just via touch. Or you can play with buttons and physical controls; it’s entirely up to you. I personally prefer touch controls, because you can cast lightning in the game, and if you select lightning you can find an enemy and say, “I want you to die”, and then press them. You press the guy, and the lightning comes down, and the guy dies.

NoE: That’s quite a powerful feeling!

NoE: (laughs) Let’s just emphasise this point for everyone at home.

RM: I’m not sure you fully grasp how really awesome this is! (laughs) Just touch things, and they die! It’s so good.

NoE: As they’re the new guys, what can you tell us any more about the demon faction and their special abilities?

RM: Right, they’re the new guys. Demons usually have cheaper but slightly weaker units, so they rely more on their numbers, rather than super-burly Vikings with axes. But they also have some really interesting mechanics.

Every faction has its own unique set of spells, and its own unique units, and the demon faction relies a lot more on accepting that your units are going to die, but that’s OK, you just send a lot of small goblins out. So you’ve got barrel riders, which are screaming goblins riding on explosive barrels; you have serpent warriors that turn to stone when they’re defeated, so they leave an obstacle behind. And you have a sacrifice spell that you can use when you realise, “I have hardly any mana but I have way too many units, I’ll just sacrifice a few units.”

NoE: You’ve got to be pretty evil then, really.

RM: But just like the lightning spell, it feels really evil to go, like, “I’m going to sacrifice one, but who’s it going to be?” And there’s like five imps, and you go, “It’s gonna be Mike! Off you go Mike! Now I can cast another spell.” (laughs)

The demons basically revolve around overwhelming your opponent. You can also build crypts, which spawn skeletons over time, and they just shamble forward and attack. They’ll fall apart after a little while, but they’ll just really, really help you to overwhelm the enemy. And there’s a really big guy, which is a new thing in the game: every faction has its own super unit, which is like a hero. For the demons, that’s a really big guy with a shield, but you can set him to a throwing stance, and then all the units that come up behind him will just be thrown away.

NoE: He throws them at the enemy?

RM: Right, but he throws them in an arc, so when there’s a big bunch of enemy units coming up towards him, he’ll just throw the units right over them. “Yeah, it’s really cool that you have your entire army here, but my army’s already behind you!” It’s surprisingly effective. 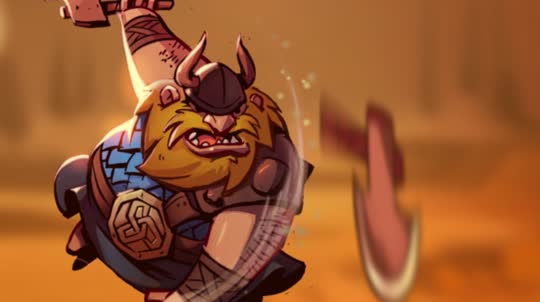 Swords & Soldiers II will be released on Nintendo eShop in early 2015.

Nintendo eShop is your official digital games store on Nintendo Switch. Download your favourite games instantly to your console, available anytime and from the comfort of your home. Find out more