10th February 2011 - Nintendo and The Pokémon Company International are giving Pokémon fans another reason to get excited about the upcoming launch of Pokémon Black Version and Pokémon White Version games for the Nintendo DS family of systems. Those who are quick off the mark and purchase either of the new games between 4th March and 22nd April 2011, will be eligible to receive a special Liberty Pass via Nintendo Wi-Fi Connection (broadband Internet access required) or at selected retailers. This special Liberty Pass will enable the lucky few who receive it to catch the never-before-seen Mythical Pokémon, Victini. 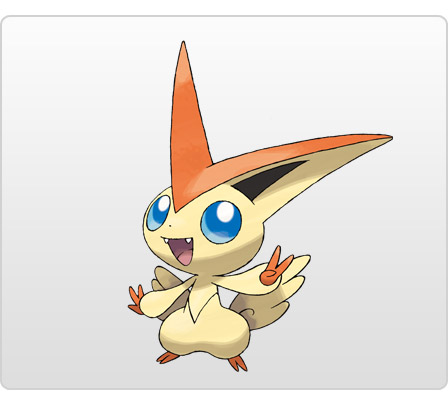 Victini – the Victory Pokémon – is the first ever Pokémon to be both Psychic and Fire-type and it cannot be obtained through normal gameplay. It is said that Victini creates an unlimited supply of energy, which it shares with others. This energy source may be the secret to how it brings about victories. Victini’s unique and exclusive Victory Star ability not only increases its own accuracy in battle, but also boosts the accuracy of all your fighting Pokémon. Victini is a must-have in any Pokémon battle, and especially useful in Triple Battles, which is a unique new feature of Pokémon Black Version and Pokémon White Version.

Featuring more than 150 never-before-seen-Pokémon, no matter which version you choose, you’re sure to have fun. With an array of expanded features for taking your Pokémon into battle, you can challenge other trainers in either the game’s main adventure, or go head-to-head against your friends.

To be in with a chance of receiving the special Liberty Pass, grab your copy of either Pokémon Black Version or Pokémon White Version when they launch across Europe on March 4th 2011.

The new Unova region is waiting - your task, to catch 'em all and become the best Pokémon Trainer you can! With over 150 new Pokémon to encounter, changing seasons and new connectivity modes, Pokémon Black Version offers a fresh challenge! Find out more

The new Unova region is waiting - your task, to catch 'em all and become the best Pokémon Trainer you can! With over 150 new Pokémon to encounter, changing seasons and new connectivity modes, Pokémon White Version offers a fresh challenge! Find out more