Challenge Mario and Sonic with the new blue Wii bundle

10th October 2011 – Budding Olympians can now get ready for the London 2012 Olympic Games alongside their favourite video game characters, with a little help from Mario & Sonic at the London 2012 Olympic Games™. To help you work on your sporting skills and have a lot of fun in the process, Nintendo is releasing the ultimate bundle this year featuring a copy of the game and an exclusive newly configured* blue Wii, available from 18th November.

Mario & Sonic at the London 2012 Olympic Games marks the return of the highly successful sports franchise and takes Mario, Sonic and all of their friends to London, the home of the upcoming 2012 Olympic Games. The successful duo are back - bigger and better - bringing even more multiplayer fun into your living room just in time for Christmas.

You and your friends will be able to practice new Olympic events such as Football, Show Jumping and Canoeing, while many of your favourite past events make a return but have been refined to make them even more challenging and fun. Classic Olympic events such as the 100m Sprint, Aquatics and Table Tennis are all back and better than ever. Try combining these gems with the much loved Dream Events and you will have more choice than ever before. 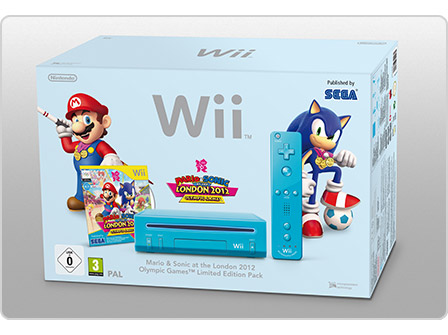 Mario & Sonic at the London 2012 Olympic Games allows you to take to the streets of London and make the city your personal playground. Choose your favourite characters in the London Party mode and take part in a number of minigames that are linked to some of London’s most famous landmarks.

The new Wii bundle, launching across Europe on 18th November 2011, includes a newly configured* blue Wii console, blue Wii Remote Plus and Nunchuk controllers and a copy of Mario & Sonic at the London 2012 Olympic Games – as well as a sticker sheet featuring characters from the game. A number of other fun Wii bundles are also being announced this autumn, all offering great value. Watch this space!

* Please note that the newly configured Wii is no longer compatible with Nintendo GameCube software and accessories.