A legend returns in magical 3D this June

19th April, 2011 – One of the most critically-acclaimed games of all time The Legend of Zelda Ocarina of Time has returned, this time in full 3D - without the need for glasses - and exclusively to Nintendo 3DS. Brace yourselves this summer as The Legend of Zelda: Ocarina of Time 3D - a masterful enhancement of one of the landmark releases in video game history – comes to Europe on 17th June, 2011.

With phenomenally re-mastered graphics and new stunning 3D visuals, fans of the original game and newcomers alike will be able to marvel at this gaming classic and join the daring adventures of one of video games’ greatest heroes – Link! 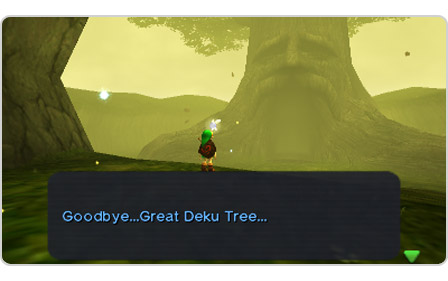 Guide Link – a young boy who is tasked with saving the land of Hyrule from Ganondorf, the Gerudo King of Thieves. The evil Ganondorf, led by his ambition to overthrow the current Royal Family of Hyrule, is intent on gaining mastery both over the land of Hyrule and time itself. It is up to Link to stop him in his tracks as you guide him on a magical journey through time. Explore vast landscapes, mythical temples, dungeons, towns and villages, while interacting with many different characters and battling various enemies – all in stunning 3D.

The game’s original control scheme has been completely redesigned to fully make the best use of the capabilities of the Nintendo 3DS system. Players will be able to control Link with the Circle Pad whilst the Touch Screen of the Nintendo 3DS system is used to assign items, check maps and ensure that Link is wearing the appropriate equipment - all in a fresh and intuitive way. 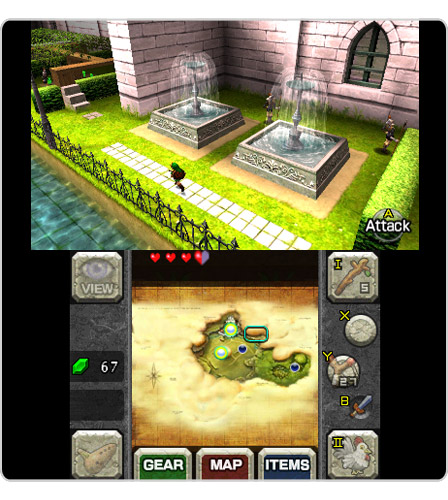 Not only does the full 3D gameplay experience provide easier in-game navigation, but an improved and intuitive interface gives you better control as you solve puzzles, travel through time and explore the immersive land of Hyrule. Players not so familiar with the Legend of Zelda series can also get a helping hand through bite-sized videos available in-game which will provide hints on how to solve the puzzles encountered during your journey.

Fans of the original game will be pleased to know that The Legend of Zelda: Ocarina of Time 3D also heralds the inclusion of two brand new additional challenges not available in the original game: Master Quest and Boss Challenge.

Master Quest mode will see some surprising changes to the game. Puzzles will have to be thought about and solved in new ways from the main Story mode, whilst items and enemies will be found in different locations. The land of Hyrule has also been reversed as locations are mirrored - so what would ordinarily have been on the right now appears on the left and vice versa.

Enemies will also prove more difficult to beat, as such the greater complexity involved in this new Master Quest will test the gameplay abilities of even the most seasoned fans and prove a new experience for all.

The new Boss Challenge mode acts as an extra treat for those players who reach a certain point within the game. It will provide players with the opportunity to face any of the previous Bosses they have defeated once again, or, the option to face and confront them one-by-one, all in a continuous battle.

The game’s graphical re-working coupled with the three-dimensional depth provided by your Nintendo 3DS system breathes new life into this timeless classic. Whether you're a first-time player or a regular visitor to Hyrule, the engaging, immersive gameplay features of The Legend of Zelda: Ocarina of Time 3D offers a magical new adventure for all.

Stay tuned to the official website for the game at www.nintendo.co.uk/zelda.

The Legend of Zelda: Ocarina of Time 3D launches across Europe, exclusively for Nintendo 3DS, on 17th June, 2011.

The Legend of Zelda: Ocarina of Time 3D

Legend of Zelda: Ocarina of Time 3D is an unforgettable classic from the Nintendo 64 console, reborn on Nintendo 3DS. Enter the land of Hyrule in this action adventure and embark on a quest through time to combat evil! Find out more

Learn the truth behind the conflict of the two nations of Aionios in Xenoblade Chronicles 3, coming to Nintendo Switch on July 29th

The legend is alive!