Get ready to run, jump, and smash your way through Pikachu’s latest action-packed adventure for all ages when PokéPark™ Wii: Pikachu‘s Adventure launches on Wii on 9 July.

Playing as Pikachu, you must solve the crisis that has befallen a strange new place, the PokéPark. Along the way, you’ll befriend key Pokémon as you take part in Skill Games and the many challenging Attractions to be found in the PokéPark. 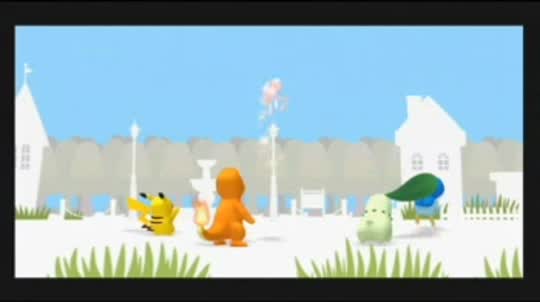 PokéPark Wii: Pikachu’s Adventure is the first Pokémon adventure title for Wii. As well as pulling you into a deep and engaging action adventure story, you will meet and talk to a wide variety of Pokémon.

As you work your way through the story, you’ll explore various zones within the PokéPark, each very different to the last. Whether in Beach Zone, Iceberg Zone, Lava Zone or Haunted Zone, you’ll find various Attractions, which comprise the main challenges in the game.

Each Attraction is a mini-game, such as a footrace, a test of strength or an obstacle course, designed to test your skills to the max. Beating the high score in an Attraction is often a way of receiving a Sky Prism Piece. Shake and tilt the Wii Remote to fly, swim and skate your way through a whole host of fun Attractions, such as:

But Pikachu isn’t the only one who can challenge the Attractions! As Pikachu befriends other Pokémon, some will become playable in different Attractions, opening up a wealth of possibilities to make strategic use of different Pokémons’ specific strengths.

Many of these Pokémon will also challenge Pikachu to a Skill Game, such as a simple Battle, a game of Hide-and-Seek, or a Chase – all games that will allow you to build friendships with the challenger by defeating them!

Zip across land, sea, and sky to show off your speed and skill in the first ever Pokémon action adventure title for all ages on Wii when PokéPark Wii: Pikachu‘s Adventure launches on 9 July 2010.