30 July 2009 – Starting today, you can upload photos directly from your Nintendo DSi to Facebook using Nintendo Wi-Fi Connection, making everyone’s favourite handheld console an even better way to share the fun with friends and family. 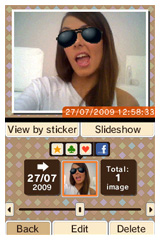 The exciting new Facebook integration with the Nintendo DSi Camera allows you to send photos directly to your Facebook stream, where they will be shared with friends and stored in an Album on your profile. A Facebook logo will then appear in the album section of the camera, and a Facebook icon will now be present above your picture. Tap this to immediately connect online to your Facebook account and upload your picture.

The first time the new Facebook integration is used, you will need to log into your Facebook account using Facebook Connect, after which your email can be saved to the Nintendo DSi for ease of uploading images. The new Facebook functionality of the Nintendo DSi provides a safe and secure experience, and your password will never be revealed. Users can also always update their privacy settings on Facebook.com. 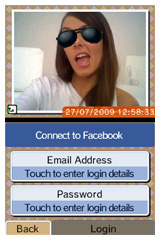 You can upload up to 200 photos in one album which is automatically named “Photos from Nintendo DSi” for your convenience – but there’s no need to stop there!  When the 201st photo is uploaded to Facebook, a new album will simply be created.

Every single image from your Camera Album can be uploaded to Facebook.  The fun image-altering tools available on the Nintendo DSi mean you can now play with them to your heart’s content before uploading them immediately to Facebook to share with friends.  With eleven different lenses available on the Nintendo DSi Camera, you’ll never have had so much fun with your pictures!

Connect to the Internet via Nintendo Wi-Fi Connection today, and take your photo sharing to a new level with Facebook on Nintendo DSi.