7. The Culture of Kyoto

What do you think is the reason you have been able to keep working together for 25 years, a whole quarter of a century?

Our personalities are completely different.

Yes, I think they are. (laughs)

But no one of us has ever said to another, "I refuse to accept your idea."

Our opinions do differ, though.

At least, I've never seen you clash in a way that dragged on.

It's strange. I wonder why. Maybe we're in a symbiotic relationship?

We each value what the other can do that we can't.

You each respect each other for having what you don't, and you exist in a three-way symbiotic or standoff relationship. (laughs) 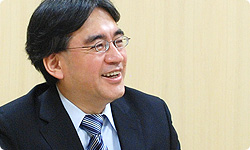 And we go out to eat together, order the same dishes, say, "This tastes good!" as we eat, and get along well. (laughs)

We're always snacking as we work.

The other day, we ordered a load of rice crackers from Awaji Island and talked over a bunch of stuff as we munched on them. (laughs)

No, that's only the two of you. I'm not in the rice cracker club! (laughs)

Thank you. This is my final question in this series of five "Iwata Asks" interviews on the 25th anniversary of Super Mario Bros. I'd like to hear what you hope to achieve in the future with the Super Mario Bros. series.

Well, as a member of the preservation society...

I already said that. (laughs)

Okay, starting with you, Tezuka-san.

I think New Super Mario Bros. Wii firmly established the idea of everyone in the family playing together.

Yeah. I want to keep heading in that direction so the games are a tool for family bonding. I want the games to be a tool for expanding upon previously existing good elements rather than for making something different. 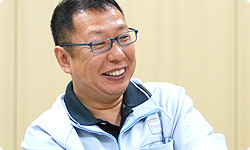 Since I'm in charge of putting music into the finished game rather than making the game itself, it's hard for me to say what kind of games we should make, but I really want to make good music. When an even more fun game appears, I want to put in even more fun music. 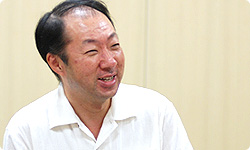 When we have Kondo-san play the game before he puts in the music, he tells us his first impression without any beating around the bush, which is really helpful.

Kondo-san, I suppose from now on you will continue to contribute to the team in two ways, by creating good music and by sharing your extremely honest impressions of the games.

This relates to the preservation society we mentioned earlier, but there's something we've been saying within the company for quite a long time: "As programmers, let's aim for a masterly world."

Yeah. For example, if the founder and master of our art, Miyamoto-san, says, "Let's put a block in this level," even if that's an impossible request, we pull it off with masterly skill!

That's what I hope to do. We simply enjoy making things.

You enjoy yourselves as you make the games, and you can tell that the players also enjoy them, which makes the process even more enjoyable!

Yeah, it really is fun. 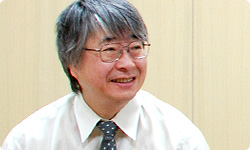 How about you, Miyamoto-san?

I think Tezuka-san is exactly right about making something that families can enjoy together, but when we think about who Mario is as a character, I also think it's important to always use the most advanced technology for Mario in order to create something no one has ever seen before. Of course, it's important to make sure people still say things like "Falling down the holes is the most fun!" but something new is necessary for other aspects of the games, and it's those new elements that make a Super Mario Bros. game what it is. 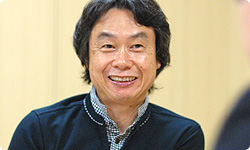 In general, it might look like you aren't exactly pursuing the most advanced technology, but in truth, you've always had a relatively strong attitude of insatiably adopting the latest video game technology. I think that may be why Super Mario Bros. hasn't grown old even after 25 years. What's more, I think one reason that people who had started playing Mario on Wii can comfortably enjoy playing the original Super Mario Bros. is because the foundation is well-made, including the "pleasure components" that Kondo-san spoke of. I think that the secret to longevity may be the games' blend of old and new elements. 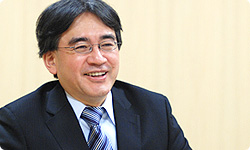 That's the culture of Kyoto.

Kyoto lights up even really old temples with the latest technology. I think Kyoto's culture is one of keeping tradition alive by absorbing lots of new things. But it's not like we consciously think about that every day. (laughs)

But the birth of Nintendo in Kyoto and its continued existence here must have something to do with it. I wasn't born or raised in Kyoto, but when I hear what you just said, I think it's true.

The next stage for the Super Mario Bros. Preservation Society's activities is Nintendo 3DS.

Yes. (laughs) I want to show everyone as soon as possible what the new Super Mario Bros. will be like on Nintendo 3DS.

I'm really looking forward to it myself! Thank you for your time today.