For my final interview on the occasion of the 25th anniversary of Super Mario Bros.1, I have gathered the original developers, four men who continue to be active in development of the Super Mario Bros. series. I'd like to ask how Super Mario Bros. came to be and why it is that so many people continue to love the series today, 25 years after its birth. Thank you for coming today. 1 Super Mario Bros.: An action game released for the Family Computer System (Famicom) in September 1985 in Japan.

By the way... who had all these documents hidden away in a drawer of his desk? 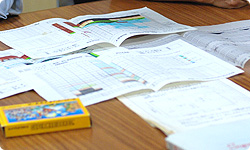 You sure are good at keeping things!

These are Miyamoto-san's first specifications for Super Mario Bros.

Wow! Amazing! (laughs) These are incredible...

These are Miyamoto-san's first specifications for Super Mario Bros.

Oh, this is in the booklet included in the Super Mario All-Stars - 25th Anniversary Edition .2 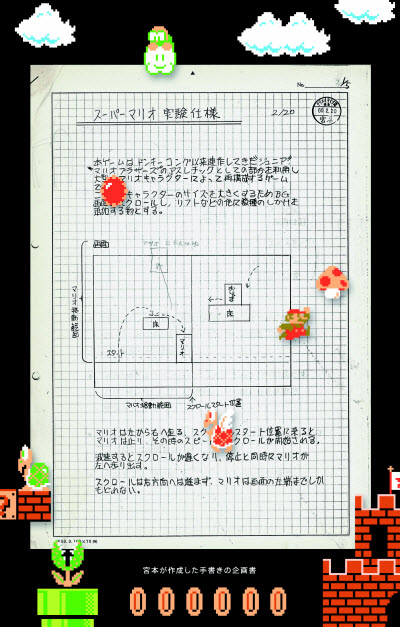 Yeah. We still wrote them by hand back then, and the seal is from the Creative Department.

That's the seal for the section that existed before the Entertainment Analysis and Development Department, and the date is... February 20, 1985. That means it was written the same year as the release of the original Super Mario Bros.

We wrote the specifications on February 20, and six months later we put it on the ROM... 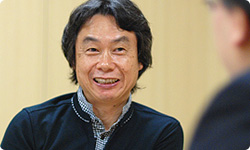 (laughs) Actually, I had written some test specifications earlier, in December of 1984.

I can't find those no matter where I look.

If memory serves... the first thing I told Nakago-san to do was make a big character that jumps around.

And that's how the big Mario first appeared.

Around December of 1984, I wanted to see what it would be like with a Mario jumping around who was about twice the size of the one in Mario Bros.3, so I asked the programmers at Nakago-san's company, SRD4, to make a test version - something in which, when you pressed a button, Mario would jump, and if you hit it repeatedly, he would jump in the air, too. And it turned out to be pretty good. 3 Mario Bros.: An action game that appeared in arcades in 1983 and was released later the same year in September for the Family Computer System (Famicom) in Japan. 4 SRD Co., Ltd.: A company established in 1979 that contracts to develop video game software programmes and develops and sells CAD packages. The head office is in Osaka, but their Kyoto office is inside Nintendo headquarters. Toshihiko Nakago is company president.

Was the sky already blue in that test version?

No, it was still pitch black.

In the "Iwata Asks" discussion on New Super Mario Bros. Wii, you said that when you saw that blue sky on the screen, you were surprised by the bright, fresh visuals possible with the Famicom.

That was after we became able to scroll the background sideways.

At first, only Mario moved?

No, only a square shape. 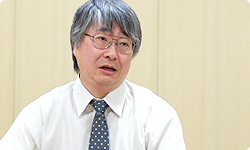 You began by experimenting with moving around something square.

Yeah. First, we moved around a square, then said, "Next, let's make something like this," and did other things.

What did we do after that experiment?

Yeah, yeah, I remember now. After doing the square experiment for Super Mario Bros., we began experimenting with what became the basis for The Legend of Zelda. And I wrote these specifications in February the next year?

I wrote these specs under pressure from Nakago-san to hurry up and settle on something. I wrote them all in a burst when I saw the movement in the test version made in December.

Mario was square and the buttons on the controller were square, too. 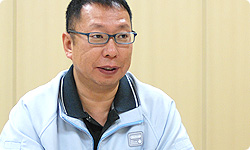 The buttons weren't round yet, right? And for movement, you... huh? It says you're supposed to push up on the D-pad to jump! 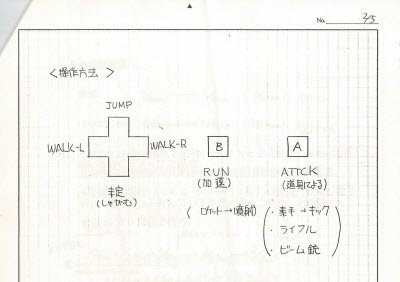 The A button is for attacking with items... Could this be for The Legend of Zelda?

That's strange. It says, "Press the D-pad left and right to control Mario at two speeds..."

No, it's for Super Mario Bros.

And it says the A Button is for kicking when empty-handed and also for using a rifle and a beam gun. Is this really for Super Mario Bros.?! (laughs)

He was going to use a beam gun when he flew on a cloud.

Ever since the beginning, you imagined him flying in the sky?

Yes. But at the time, it wasn't on a cloud, but on a rocket.

Huh? Mario flying on a rocket?! (laughs) Oh right, that's on another page.

I decided to divide the actions between ground and sky. I think I was still figuring it out. Even though it was only six months before completion. (laughs)

Still, I'm surprised that early on you didn't use the A Button to jump.

I didn't remember either!