4. I Want To Work at Nintendo!

Yoshida-san, what made you think you wanted to become a video game developer?

I mentioned earlier how I used to sneak into my older brother’s room. I also have a younger brother, and he and I would always play the

Yoshida-san, what made you think you wanted to become a video game developer?
two-person fighting game Mario Bros .15 When I was fighting him, I would always lose. He was much better at video games than I was. 15Mario Bros.: An action game that appeared in arcades in 1983 and was released later the same year in September for the Famicom system in Japan.
Iwata:

That’s usually true, but my little brother’s classes at school would finish earlier than mine, so he’d get home first and sneak into our older brother’s room to play.

So then when you snuck into your older brother’s room, your younger brother had already undergone thorough training? (laughs)

Yeah. He would always beat me. Then, when our older brother got home, he would shout, “Both of you! Get out!” (laughs)

Even if I wanted to beat my little brother, I couldn’t, so I thought that if I made a video game, I could make difficult levels that he couldn’t beat.

Even though I was a child, I began thinking up a bunch of stuff and buying graph paper to draw out game levels and RPG maps. Then, when RPG Maker16 came out, I bought that and tried making my own video game. 16RPG Maker: Software released by ENTERBRAIN, INC. that allows users to create their own RPGs. Many versions have been released in the series, including editions for personal computers, the Super Famicom system, the Nintendo DS, and other devices.

You wanted to make your own game to cut your little brother down to size?

Yeah. But he wouldn’t play it. Even though I made it just for him! 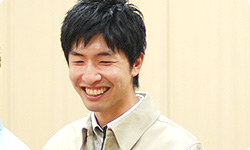 So I gave it to a friend and said, “Here, I worked hard on this, so play it.” I was really happy when later that friend said it was really great.

Playing video games is, of course, fun, but once you awaken to the joy of making them, that’s a joy of its own quite different from that of playing them.

Yes. My eyes were really opened to that. I watched over my friend’s shoulder as he played, and I thought, “Ah, just as I’d thought, he’s getting stuck here...“

(laughs) And that thrill made you want to become a video game maker?

Yes. That was, of course, true, but I had another big source of inspiration. The elementary school I was going to had a computer room, and there was a class in writing your own programs to display images. For the first time, I experienced displaying on a screen something I had programmed myself, and I thought, “I think I could make a video game.” That was my fourth year of elementary school, but I was serious about wanting to make video games.

Matsuura-san, what made you want to make video games?

In my first year of junior high, I got Super Mario 64, and that was really fun, so I thought, “I want to work for Nintendo!” For Yoshida-san, that moment came in the fourth grade of elementary school, so...

There’s always someone ahead of you. (laughs)

Yeah, I was falling behind. (laughs) I was good at Japanese language but no good at math. Nonetheless, I applied myself to math and science courses, and in my first year of junior high I decided I wanted to become a programmer. As a junior high student, though, being a programmer was the only job I could think of for working on video games. I didn’t know about designers. I thought programmers did everything.

Well, in the distant past, that was actually true! (laughs)

I studied to become a programmer and made it into Nintendo, but, just like Amano-san, I was first assigned to Mario Club and worked on debugging. I had programming knowledge, so I sort of knew where bugs were likely to occur and thought it was suitable work for me. 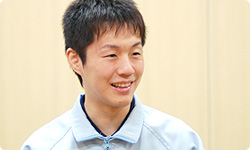 You know the principles behind the game, so it’s easy to imagine.

Yeah. For example, I wondered what would happen if you played all the levels with Mini Mario, the really small Mario. When I did, there’s this one course where big mushrooms are lined up, and even though there’s no space between them, when I was running across, I fell between them!

You could slip through because you were so small.

Right. While I was doing that, I thought maybe I could make

Yoshida-san, what made you think you wanted to become a video game developer?
Hint Movies using Mini Mario for levels on which you usually wouldn’t use him. In the end, 8 of the 65 Hint Movies in New Super Mario Bros. Wii involve Mini Mario.
Iwata:

Yeah. The ones who actually did the playing were the debuggers, but I was told to make sure they went down the centre of the pipes and didn’t jump any more than necessary. What’s more, I was told that when two coins are hovering together, you’ve got to get them both or not try at all.

We couldn’t leave one coin!

I can understand. It wouldn’t look good.

Right. A Hint Movie has to look good. Hint Movies generally do look good, but the Super Skills movies have to be perfect!

My seat was close to Asuke-san’s and Amano-san’s, and I remember how those two would watch the screen and I heard them often saying , “Oh, close but no cigar!” and “He almost had it!” (laughs)

I’d be like, “It’s still no good...“ and record Hint Movies over and over again with the debuggers. So I was the one who cried that time! Because both Asuke-san and Amano-san made me!