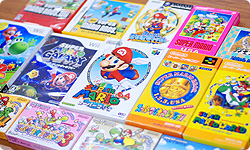 The year after the release of Super Mario.1 1Super Mario Bros.: An action game released for the Family Computer (Famicom) system in September 1985 in Japan.

Yeah. I entered the company the year after Super Mario came out and for a while I did some other work. Later, the first Mario game I helped develop was Super Mario Bros. 3.2 2Super Mario Bros. 3: An action game released for the Famicom system in October 1988 in Japan. 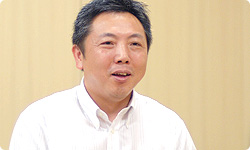 What work did you do on Super Mario Bros. 3?

I helped draw the levels. After that, I did some other work, but then I returned to the Mario team as the level director for Super Mario World3 for Super Famicom and concentrated on making the levels. Then I shifted over to other work again, so I’m not involved with the Mario series anymore, but as a related game, I helped make the levels for Yoshi’s Story .4 3Super Mario World: An action game released simultaneously with the Super Famicom system in November 1990 in Japan. The fourth game in the series. 4Yoshi's Story: An action game released for the Nintendo 64 system in December 1997 in Japan.

Next is Konno-san. You joined Nintendo at the same time as Eguchi-san. 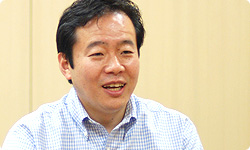 Right. Then I worked on Super Mario 3 with Eguchi-san, and as the hardware shifted over to the Super Famicom, I participated in development of Super Mario World.

What were you in charge of for Super Mario World?

First, I worked on making the

(looking at all the Super Mario games lined up) What a sight... Today I’ve gathered a number of developers who have been involved with the Super Mario series. None of you worked at Nintendo 25 years ago when Super Mario was first released.
overall map for choosing courses in Super Mario Bros. 3, and I did the same sort of thing for Super Mario World. I also drew levels together with Eguchi-san. We laid tracing paper over graph paper and painstakingly drew levels every day.
Iwata:

Back then, a lot of time elapsed from thinking up a level to actually running it in the game.

Yeah. It took a whole day. We’d give a level layout to a programmer in the morning, and a working version would be ready that night. But then when I’d try it out, something would be wrong, like a Goomba sunk into the ground! (laughs)

Coordinates were input by hand, so lots of errors occurred. (laughs)

After that, you worked on the Mario Kart series.9 9Mario Kart series: Super Mario Kart, the first game in this series, was a racing game released in August 1992 for the Super Famicom system in Japan. Later, instalments were released for the Nintendo 64 system, Game Boy Advance, Nintendo DS and Wii console for a total of six games to date.

Yeah. I worked on the Mario Kart series, and a bunch of other games, like Nintendogs .10 10Nintendogs: A simulation game for enjoying communication with puppies. Released for the Nintendo DS in April 2005 in Japan.

I joined the company in 1988. I was slated to be assigned to a different development department, but not long after I joined, I received training for the Entertainment Analysis & Development Department (EAD). At that time, Takashi Tezuka-san, who was directing Super Mario Bros. 3, asked me to make some characters. I drew two enemies, and that was my first involvement with the Mario series. 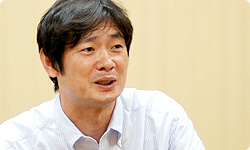 Which enemies were they?

Lava Lotus and Spike . They went right into the product. Lava Lotus only appeared in Super Mario Bros. 3, but Spike appeared in several games afterward.

It’s amazing that characters you drew while you were in training got adopted straight into a game. (laughs)

The Super Mario Advance series was a project that began with the idea of adapting old Super Mario games to be played on the Game Boy Advance.

Yeah. At first it was decided to bring out a series of four games. The first one was Mario 2, next was Mario World, then came Yoshi’s Island12, and Mario 3 was last. I was involved with the first Super Mario Advance game as a designer. 12Super Mario World 2: Yoshi's Island: An action game released for the Super Famicom system in August 1995 in Japan.

You were a designer at first?

That’s right. When it came time to decide who would be the director for Mario Advance 2 and later games in the series, the suggestion came up of having me direct them since I had been design leader on the first one.

When you say it like that, you make it sound as if it just naturally fell into your lap. (laughs)

Sorry. (laughs) Um, it wasn’t like that. I originally came into the company as a designer, but I’d been begging to do something like think of a game and make it myself, so I think I got asked to do it because of that.

Yeah. I was producer of those two.

As the youngest, you’re last Koizumi-san.

I entered Nintendo in 1991, the year after Mario World came out. I wasn’t hired to make games but was in charge of drawing illustrations for game packaging and instruction manuals.

What we call artwork around here.

Yeah. And Yoichi Kotabe-san15 taught me how to draw characters and I started drawing Mario every day. 15Yoichi Kotabe: One of Japan’s foremost animators known for his work on the animated television series Heidi, Girl of the Alps. After leaving Toei Animation, he joined Nintendo, where he worked on character design for Mario. Currently, he works as a freelance artist.

You studied as Kotabe-san’s pupil.

He told me things like “The lines for Mario are about this thick” and “This line is two millimeters. The space between these eyes is one millimeter.” Then, perhaps by chance, although I don’t really know for sure, the year before the Nintendo 64 came out, about 1994 or 1995, I got to work on Mario 64.

What was the reason you went from being Kotabe-san’s pupil to Miyamoto-san’s pupil?

I hadn’t formally specialised in 3D CG design, but mostly as a private hobby, I had imported a computer called Amiga16, known for its advanced graphics, and at home I would work away at 3D modelling and animation, and I would show it to Miyamoto-san. Then before I knew it I was in charge of model animation for the player character in Mario 64. But games were appearing in 3D then, so I did all kinds of things like designing the camera and making enemies and land forms. 16Amiga: A personal computer developed by Commodore that first appeared in 1985.

Back then, the way to execute a 3D action game wasn’t firmly established, so someone who was interested could charge ahead and make whatever he wanted.

Yeah. I really did make whatever I wanted. It was endless, so I might have been a big pain in Miyamoto-san’s neck. (laughs) Anyway, that’s how I was involved.

And that’s why you’ve always worked on the 3D Mario games.