4. The Grand Culmination of Cartridges

What was your view of Super Mario Bros. when it was released?

I actually didn’t know that Super Mario Bros. was being made. I was tied down with many other things. (laughs)

My work is always like that. I always have to think about what comes next, like what we’ll do if the Famicom were to go belly-up sometime.

That was just before the release of the Disk System .13 It’s not like Super Mario Bros. was released to great fanfare or really caught fire just after release, either. 13 Family Computer Disk System: A peripheral product for the Famicom released in February 1986 in Japan. For media, the system used floppy disks on which software could be written at low cost.

Yes. I don’t think many people knew about it at first.

At that time, the video game media outlets had started appearing, but I don’t remember Super Mario Bros. being talked about much beforehand. Without exception, though, those who played it were drawn in.

Yeah. It drew in a lot of people.

When did you feel like Super Mario Bros. was really taking off?

I don’t remember the exact date, but a while after Super Mario Bros. went on sale, I was in Tokyo on a business trip, and I just happened to stay at the same hotel as Yamauchi-san. After work was over and I’d gone back to my room, I got a phone call from Yamauchi-san telling me to go meet him. I thought something unusual must be up, so I went to his room. He said it looked like Mario was going to be a big hit. 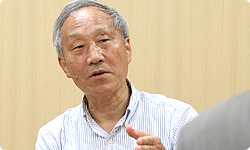 Oh, he said that? He must have realised that day that it was catching on.

I still remember that day clearly.

Imanishi-san, when did you realise it was going to be a big hit?

When the president of another company visited once, I remember he said it was an amazing game and nothing could ever top it. Hearing that from that person, I thought it might really be true.

That was before the release of the Disk System, so Nintendo was heading in that direction. But I don’t think anyone at Nintendo ever thought we would be able to pack so much value into a cartridge with a ROM of that capacity, or that we would sell so many worldwide. But, like you said earlier, Iwata-san, everyone who played Super Mario got sucked into it.

At that time, it truly was a social phenomenon. Everyone from children to adults was talking about secret techniques for Super Mario.

Yeah. I’ve got this photo from those days...

Oh, a sign at a store. What does it say?

This feature article was in the Asahi Graph, published by Asahi Shimbun.

If you think about the reader demographic, this is a strategy guide for adults. It goes into great detail about what to do.

Before Super Mario Bros. came out, even the parliament had taken up the issue of the influence of video games on children, and newspaper articles were mostly negative. But Mario’s bright atmosphere cleared away that prejudice against the Famicom. 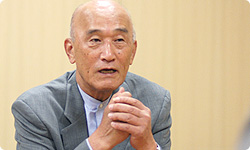 Its overwhelming cheer and bottomless fun painted over any negative elements.

I truly think so. It isn’t dark at all. It’s downright bright. And the contents are quite deep. Another thing is the effect of the music. I think that was another big factor. When it’s covered on TV, they always play that music. If you hear it coming from a storefront, you head that way.

Even today when people hear that music, it takes them back to the day. Just hearing that music makes you turn around and draw near it.

Not six months. I think it took longer.

I suppose so. Earlier, I said it was hard when lots of other developers began releasing games, but actually, I think those games were also quite a big help.

At first, Nintendo had to provide games on its own, but around the time Super Mario Bros. appeared, it looked like a number of other makers were going to start releasing games, so we had more time to spend on game development.

I had the impression that Miyamoto-kun* purposely made Super Mario Bros. on cartridge against everyone’s anticipation surrounding the Disk System. * Like “san”, “kun” is an honorific that is used at the end of someone’s name. “Kun” is typically used when you call out someone who is younger than you, and “san” is commonly used as a title of respect.

I do think Miyamoto-san made Super Mario Bros. to be the grand culmination of ROM cartridges, because, at the same time, he was also making Zelda 15 for the Disk System. 15 The Legend of Zelda: An action-adventure game released simultaneously with the Famicom Disk System in February 1986. In Europe it was released for the NES in November 1987.

I’m sure he did have a certain inclination toward the Disk System, but Super Mario Bros. was made under the best conditions, and, more than anything, I think it was a good thing that no one had any expectations. I get the feeling Miyamoto-san really enjoyed himself making that one, and when you play it, you can really see that reflected in the game in a number of ways. I think he put in the most fun stuff that he could within the realm of what was possible at that time. In that sense, I think Super Mario Bros. was indeed a grand culmination. But he had plenty of time to pack in all that stuff, and was able to do that thanks to other game makers. 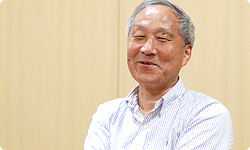 In the days when we were the only ones making our games, we were required to put out one game every three months like automated machines, but with the emergence of other game makers, we were afforded more time, so we were able to fill out our games to a degree that was outstanding for that time.

I think so. That’s my theory, anyway.

The obligation to come out with games at that time was quite a burden.

The world is full of examples of how hard it is, once you create something really incredible, to keep up that standard of value. So what is it about Super Mario Bros. that has caused so many people to love and support it across the span of 25 years up until the present?

I don’t think there are that many different basic kinds of play activities. I think Super Mario Bros. was the first to nail down something good that no one else had thought of.

So that’s why it became king of the genre?

When Miyamoto-san created the prototype character for Mario in Donkey Kong, he called him Mr. Video. It appears he wanted to put that character in all the games he made, but with Super Mario Bros., he really did establish someone worthy of the name Mr. Video.

Before Mr. Video, he was called Ossan (middle-aged guy).

Right, right. Ossan! (laughs) At first he was Ossan and Jumpman. He wasn’t called Mario until some time later.