Today I would like to “ask” two seasoned experts in the video game industry. This 13th September marked the 25th anniversary of the release of the game Super Mario Bros. Thanks to the continued support of the series by its many fans, Super Mario is still doing great a quarter of a century after his first appearance. Nintendo is currently holding a 25th anniversary campaign, to show gratitude to everyone who has supported the series over the years. As part of that campaign, I would like to ask the two of you about what went through your minds as you witnessed the creation of Mario, as two core members of the company who were there when Nintendo turned from a playing card company to - in an unexpected turn of fate - a toy company, and then found electronics, transforming itself further into a video game company. I believe that leaving a record of this in some kind of form for future generations will have important historical significance. That is why I asked you two to join me for this session of “Iwata Asks”.

You sure expect a lot from us! (laughs)

I do. (laughs) Thank you for coming.

Thank you for inviting us.

When the Famicom (short for Family Computer, the Japanese equivalent of the Nintendo Entertainment System) came out, Imanishi-san was heading the General Affairs Department, and later he became general manager of the Corporate Communications Division. Uemura-san was in charge of hardware development. The yellow Super Mario cartridge stuck in this white and dark red console set a record for the number of copies sold that has never been beaten in Japan. 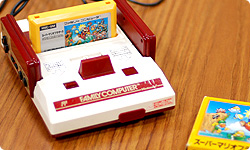 As far as the number of game consoles goes, the Nintendo DS has outsold the Famicom, and when it comes to games, Wii Sports1 has sold more copies around the world, but when it comes to the number of packaged copies of a game sold in Japan, Super Mario Bros. still far surpasses all other games. 1 Wii Sports: A sports game including simulations of tennis, golf, bowling, baseball and boxing. In Japan the game was released simultaneously with the Wii console in November 2006. In Europe it was bundled with the Wii console which went on sale in December 2006.

Uemura-san, first I’d like to ask you about the birth of the Famicom. How did development of it begin?

What a task! (laughs) Hmm... Where should I begin? I suppose it started when former Nintendo president Yamauchi-san called me at home once. This is a fact. He said the good sales of Game & Watch2 wouldn’t last very long. 2 Game & Watch: Beginning with the release of Ball in 1980, and lasting until 1984, 59 titles appeared, selling 43.4 million games worldwide. 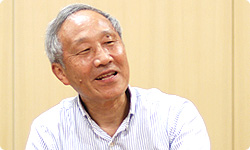 At the time, Game & Watch was Nintendo’s main product.

Yes. Yokoi-san3 was in charge of the Research & Development Department 1, which was developing Game & Watch. The number of workers he had was increasing. Meanwhile, I had the Research & Development Department 2, whose numbers were decreasing, so I had time on my hands and was going home fairly early. (laughs) 3 Gunpei Yokoi (1941-1997): While at Nintendo, he played a central role in developing such products as the Game & Watch handheld electronic games, the Game Boy handheld system, R.O.B. (Robotic Operating Buddy), and the game Dr. Mario.

Even though you were in charge of a development department? (laughs)

Yeah. (laughs) But there really wasn’t anything to do! I even wondered if Yamauchi-san had called me out of consideration for that. He said the next thing would be video games for play on home television sets and asked if my department would develop them. But such games had been around for awhile.

I understood that it would be an extension of those, but Yamauchi-san made various stipulations. He said the games wouldn’t be built-in, but rather we would adopt the cartridge system, which was just then becoming mainstream. What’s more, he told me to make a machine that wouldn’t have any competitors for three years.

Wow, he said that from the very...

He was clear about that from the start.

But holding competitors off for three years is something...

It wasn’t like Nintendo possessed some secret weapon, so from the point of view of an engineer, it was impossible.

Yeah. But even if I had spoken up about that, he wouldn’t have listened. (laughs)

At the time, Nintendo had a competitive advantage with Game & Watch, and he wanted me to create the same situation with home video games.

But in order to maintain a competitive advantage for a while, you have to really stretch yourself at the product’s launch in order to make lots of people think, “Isn’t it a little early for that?” 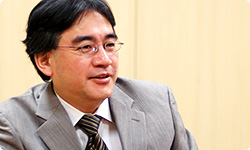 That’s right. Besides, computers were being made by semiconductor companies, so I couldn’t ask any of them to make something superior only for us. No matter how you look at it, it wasn’t going to be easy to achieve. And Nintendo was practically last to enter the market for cartridge-type video games.

A number of other companies were already selling home video game consoles.

Yeah. But I had time on my hands and Yamauchi-san was telling me to do it, so I didn’t have any choice but to agree. (laughs)

(laughs) About when did he tell you this?

Oh, the year after Game & Watch came out.

Nonetheless, he ordered you to work on the next thing.

Because you’d be making it from the integrated circuit on up. By the way, 1982 was when I joined the working world. (laughs)

I decided to give it a shot and began research on home video games, but another condition arose. Yamauchi-san said we couldn’t make it with Sharp.

That really hurt. (laughs) I had intended to collaborate with Sharp.

You worked for Sharp before joining Nintendo. We’d formed a relationship with them for Game & Watch, so working with them seemed the natural thing to do, right?

Right. But his reason was simple. He said that if we asked Sharp to put their efforts toward this, they wouldn’t be able to keep making Game & Watch games anymore. 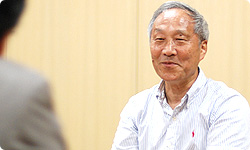 Oh, I suppose not.

Yeah. I knew he was right, so I started looking for someone to cooperate with and contacted many of the major electronics makers, but they all said no.

Why did they say that?

Their official reason was that the timing was just before a big production increase in RAM for word processors and personal computers, so they didn’t have a team free to handle an unknown product like video games. But I suppose the honest answer would have been, “We don’t know what to do,” “We don’t really understand what it is you want,” and “I don’t think Nintendo can design something like that.” I think those were their real reasons.

At the time, no one had any idea what kind of product video games were soon to become, their potential, or the scope of the market.

That’s right. And then, just when I was wondering what to do, completely by chance, I got a call from Ricoh.