When Iwata-san came to visit my office for an interview for my website called Hobo Nikkan Itoi Shinbun, he told me about your theory that an idea is “something which solves multiple issues at once.”

I think that puts it in words splendidly. It’s a useful idea, so it pleases those who hear it, and you yourself must have been pleased to have been able to put it into words. But I suppose it was actually Iwata-san, rather than you yourself, who picked up on your theory, remembered it, and spread it around.

You should have done that yourself! (laughs) But it shows you really can put into words what an idea is.

Yes, I guess so. Um, this may sound a little strange, but when Iwata-san told everyone what I said about an idea solving multiple issues at once, I started thinking about it for the first time, and I thought, “Oh, right, that’s true.”

And that got me thinking about a lot of other things recently, such as problem awareness. I think ideas come as a set together with problems and obstacles.

For example, if I’m in a meeting with about five people and I say, “This is what we should do,” about two people will say, “Okay, that settles it,” but the other three will be like, “Huuuh?!” And the two who agree are always the same. That’s Tezuka-san2 and Nakago-san.3 2 Takashi Tezuka: He created Super Mario Bros. together with Shigeru Miyamoto. Since then, he has participated in development of games in the Super Mario, Yoshi and Animal Crossing series. He is General Manager of the Software Development Department of Nintendo’s Entertainment Analysis and Development Department. 3 Toshihiko Nakago: He created Super Mario Bros. together with Shigeru Miyamoto. He is president of SRD Co., Ltd.

In order to explain why we always agree, it would be easy to say we simply get along, but I think it’s that we have the same awareness of problems.

We view problems the same way, so we understand immediately where the answer lies. People who have a different awareness of the problem, or aren’t aware of it at all, have no clue to the answer.

I thought the matter through up to that point, and then I gradually began expanding upon it. Even now, I’m in the midst of pondering it.

Do you mind if I continue talking about it?

No, by all means.

I’ve tended to think of Yokoi-san4 as my master. Once when I was in a meeting with him, he said to me, “You’re pretty negative,” and that really shocked me. 4 Gunpei Yokoi (1941-1997): While at Nintendo, he played a central role in developing such products as the Game & Watch handheld electronic games, the Game Boy handheld system, R.O.B. (Robotic Operating Buddy), and the game Dr. Mario.

But when he said that, I realised Yokoi-san was quite positive.

So when I think about something, I draw up a list of everything that won’t work. If there’s an idea according to which doing one thing means something else won’t work, I focus on what won’t work. Certainly, that is negative. So which is better, negative or positive? Well, both are important, they need to coexist. Someone who only sees the positive is just a blind optimist. 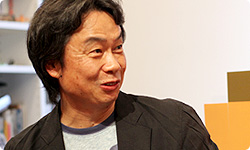 And while it’s important to know the negative, someone who only talks about what’s negative is just a pessimist.

Right. So I think perhaps the right thing to do is become positive when it’s time to say “Let’s go!” and really get cracking.

I agree. When Yokoi-san said you were negative, he was speaking as someone who bore responsibility for production or close to such a position.

So, to exaggerate, the negative person doesn’t mind focusing only on quality even if the product doesn’t get finished. But when it must be finished somehow, if you just complain and don’t do anything, you can’t sleep well that night.

Because you must finish sometime. In the end, you have to be able to say, “This is good enough.” So you can’t stay negative.

But both attitudes are necessary.

It’s the difference between people who hold reaching the exit as their final goal, and people whose jobs are finding the optimum route there.

Right, right. Getting positive when it’s time to really get cracking is what the person who is responsible for the project should do.