(Editor’s note: this interview was first published on September 13th, 2010)

Hello everyone, I’m Satoru Iwata of Nintendo. Today marks the 25th anniversary of the first Super Mario Bros. game, which was first released on September 13th, 1985 for the Family Computer System (Japanese version of the Nintendo Entertainment System).With the support of our customers from all around the world, Mario continues to energetically jump inside many TV screens today.I sincerely thank our customers across the globe for all your support during this quarter-century.Nintendo will launch a campaign to commemorate the 25th anniversary of Super Mario Bros., and at the same time we also plan to reveal several Iwata Asks interviews that will reflect on the history of Mario.I naturally thought about sharing with you an interview with Miyamoto-san who is, of all things, the father of Mario. But with Miyamoto-san being the most frequent guest to take part in the Iwata Asks interviews, I have had the opportunity to ask him questions countless times. The more I thought about it, I felt that it would be better to have someone else ask in my place, in order to present you with a fresh new perspective.Going back, the entire reason I started the Iwata Asks series of interviews was an event that struck me when Shigesato Itoi-san* interviewed me for his website “Hobo Nikkan Itoi Shinbun”. As I was talking to him I was deeply moved when I found out how much deeper a conversation could be if you’re asked the right questions in the right way. And since Itoi-san and Miyamoto-san have known each other for a long time, I felt that Shigesato Itoi-san is the perfect candidate to ask Miyamoto-san about his philosophies as a creator, from a different perspective than mine, to commemorate the 25th anniversary.So, to spearhead the 25th anniversary campaign I present you “Shigesato Itoi Asks In Place of Iwata: Super Mario Bros. 25th anniversary”. It has truly turned out to be a long and in-depth interview. Please enjoy. *Shigesato Itoi is a Japanese copywriter, author and game designer. He is most well known for his simple yet striking works in copywriting, and his works have greatly influenced modern Japanese culture as it is known today. His website "Hobo Nikkan Itoi Shinbun" (Almost Daily Itoi News) receives over 1.5 million page views per day, and hosts a series of interviews with many cultural icons including Satoru Iwata and Shigeru Miyamoto of Nintendo. Among gaming enthusiasts in the West he is most well known as the creator of Nintendo’s Mother series (known as EarthBound in the United States).

Back then, with tube televisions, it was a little blurrier and the images weren’t quite so sharp. The places where we tried to fudge it a bit really stand out! (laughs)

Like maybe you should have drawn the lines a little better for the mountains in the background?

No, the lines represent the best we could achieve with the technology at the time, so that’s not so embarrassing.

You’re not embarrassed about the places you openly gave up on.

I can understand that. But how to fix it is a difficult question. When I read books I wrote way back when, I get embarrassed, too.

Yeah, I can imagine that.

I really do. Everything I read makes me think I wouldn’t have written it like that today. And that includes everything from writing style to the way I use kanji and hiragana. But when I think of how I might change it, I think something would be lost if I did.

I wouldn’t do it like that now, but if I changed it, something would be lost.

I know what you mean.

Whenever we work on the re-release of an old game and I feel like something isn’t right, I’ll ask someone, “It wasn’t like this, was it?” but most of the time they tell me, “Yeah, it was like that.” (laughs)

II think that if I were making that game today, I would fix it, but in a way those rough places are a part of the game and even well-received.

In other words, at that time you wanted to make it like that.

So for example, when the director of a famous movie comes out with a director’s cut and reworks a bunch of details, the result isn’t always better than the original.

The two of us are here today because Nintendo’s president Satoru Iwata presented me with the unusual request of filling in for him and interviewing you on the occasion of Mario’s 25th anniversary.

I wonder what you’ll ask. (laughs)

I wonder! I hear they’re going to call it “Asking In Place of Iwata” or something like that…

I was overjoyed just that he asked, so I gladly accepted. And I’ve been looking forward to it since it’s been so long since we talked. I was approaching it rather relaxedly, when Iwata-san said, “Sorry to do this to you. Asking Miyamoto-san about Mario at this point won’t be easy.” Suddenly I was like, “Uh-oh! It’s going to be difficult!” 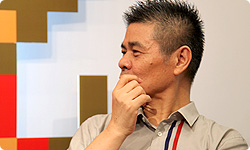 (laughs) Nah, just ask whatever you want. You know, I’ve been doing interviews about Mario here and there because we just released New Super Mario Bros. for Wii late last year and now we’ve got Mario’s 25th anniversary, and the questions are all pretty much set by now.

That’s why I’ve been looking forward to today. What are you going to ask me? (laughs)

Well, I might not ask questions that I think everyone wants to know the answers to. In that respect, someone ill-fitted to the task might be perfect for the job!

As that ill-fitted person, I gave some serious thought to today’s topic, and I reached a conclusion.

It’s something we share in common. You know how when we do an interview we always get asked questions like “How are you making the stuff you are making?” “How do you come up with your ideas?” and “What’s the knack of making great things?” You and I can’t explain very well, so we always end up saying, “It’s hard to put into words.”

When we say “I can’t put it into words,” we mean “I can’t explain how I do what I do” and “I’ve never thought about it,” as well as “You shouldn’t ask that in such an offhand manner.”

And unlike you, however, I don’t have sufficient vocabulary…

No, the way you just said that is what I’m talking about, too!

I’m the one who wants to put it into words the most, but I really can’t do it. Nonetheless, people are always casually asking me questions like that, so I’m like, “You’ve got to be kidding me!” and maybe that’s why I just answer, “I can’t put it into words.”

So at the very least that’s how I feel, and I thought you might be able to sympathise.

I see. For me, rather than feeling like I want to put it into words, I feel that I must find some way of explaining it in words. That’s partially because I have a certain position within the company.

Yes, I can understand that.

So I’m trying to explain it somehow, but I can’t do it very well, so I say, “I can’t put it into words.”

Yeah. So I thought today we could try to find the words we’ve been looking for.

Got it. One question that people casually ask that always gives me trouble is “Where do you come up with your ideas?”

I doubt you remember this, but a little over ten years ago, I asked you how I should answer that question.

You asked me how to answer the question of where you come up with your ideas? Hmm… What did I suggest?

You said that, if you had to answer seriously, the answer is “No particular place.”

You said that rather than a place, it’s about whether or not you are in the right state for coming up with ideas. 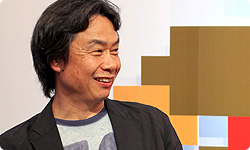 I think that is very true. I think saying “It would be easier if I had a pencil and paper” is a good answer. (laughs)

(laughs) But isn’t that just a strategy for dealing with the interview, another way of saying “I can’t express it in words”? Like a polite way of saying, “Don’t ask me that so offhandedly!”

Yeah, I suppose it is. (laughs)

But since we’ve got the chance today, let’s think beyond that. I mean, we really want to answer such questions, so don’t you want to know the answer?

Well, we don’t have a lot of time today, but with the little time we have, I’d like the two of us to think this through. The two of us. Since we’ve got the opportunity.

I think we should seriously discuss exactly what an idea is.

I see. So that’s our topic.

Yeah. What I’m trying to say is that I’m not just irresponsibly throwing out this question. I’m going to help answer it, so let’s think about this together. Especially since it’s about Mario’s 25th anniversary.