1. Seeing it Through to the End

I’d like to start by asking the producer for this title, Yamagami-san, how the relationship between Nintendo and Monolith Soft1 began. 1Monolith Soft: Monolith Software Inc. is a software developer founded in 1999. In addition to the Xenosaga series, the company has developed games such as Disaster: Day of Crisis for Wii and Soma Bringer for DS. It is based in Naka-Meguro, Tokyo.

Certainly. Well, my relationship with Monolith Soft goes right back to the development of Disaster: Day of Crisis2. For this title, we set ourselves the challenge of creating a game for the launch of the Wii console with a cinematic power that had not been seen before. However, Monolith Soft was much more used to making RPGs, and it was the first time they’d worked on a game with action at its core. This meant it took a lot longer than planned to develop the title. 2Disaster: Day of Crisis is a survival action game released for Wii in September 2008 in Japan.

Disaster: Day of Crisis was finally released nearly two years after the launch of Wii, wasn’t it?

That’s right. That’s why we decided that our second title for Wii should be an RPG, which Monolith Soft has such vast experience in, and that we would allow them to put everything they had into it. So from the latter stages of the development of Disaster, we were steadily moving towards the development of Xenoblade Chronicles.

Today, we’re joined by Takahashi-san and Kojima-san from Monolith Soft. As this is your first time taking part in one of these interviews, I wonder if I could ask you to briefly introduce yourself, Kojima-san?

Certainly. My name is Koh Kojima from Monolith Soft. I was involved in this project from part-way through the prototype stage, and I worked as director, overseeing various aspects of the game’s development, including the battle system. I’m glad to be here today. 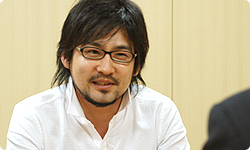 I’m very glad you could join. Now I’ve actually got a question today that I want to ask Takahashi-san without any beating around the bush: how did you feel about the idea of creating a game together with Nintendo? Feel free to be frank with your answer.

Okay then, I’ll answer without beating around the bush either. It was a huge culture shock.

Well, I had originally wanted to complete work on Xenoblade Chronicles much sooner, but once we began, we encountered a lot of difficulties and development ran into trouble. I realised that if I went ahead with all the things I wanted to do with the game, we would have no chance of making the release date that was originally scheduled. So I went to Yamagami-san to discuss the idea of abandoning certain aspects of the game.

So you judged that sticking to the originally scheduled completion date was your priority.

That’s right. It’s something we were very reluctant to do, but we knew that as professionals, we had to adhere strictly to the original schedule for completion. But at that point, Yamagami-san said: ‘Look, you’ve come this far. You should see it through to the end. I’ll convince the others at the company.’ There’s an old Japanese proverb about a cricket trying to swim across a river3. At first it’s swimming away happily, but halfway across, it just seems to give up. I’d worked on a lot of games up until that point, and there were times when I’ve done the same. So this time, I was prepared to accept that I wouldn’t be able to achieve all I’d set out to, and was mentally preparing myself to shift directions somewhat. But then Yamagami-san told me to see it through to the end, and I was really taken aback by this experience of Nintendo’s willingness to keep working at something until they’re satisfied the job is really done. 3This proverb originated in the fact that the cricket is not a strong swimmer, and refers to anything which someone starts with great gusto, but quickly gives up on. 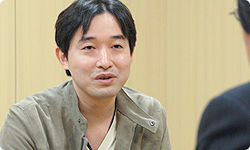 Well, the fact that the producer made that judgment was surely because he thought that Xenoblade Chronicles was worth seeing through to the point where you were all satisfied that the job was done. Kojima-san, as the director, how did you feel about being told to see it through to the end?

(laughs) You’ve got no choice but to swim all the way across!

Right. Takahashi-san’s concept for the game was vast in scale, so frankly speaking, it was pretty tough telling the dev team, who were already tired, that they had to dig in and go right through to the end. But it certainly wasn’t something I objected to, because, in the end, when you consider things from the players’ perspective, it’s incredibly important to see things through until you feel happy that you’ve done all you could.

I understand exactly what you’re saying. Now, this project all began with Takahashi-san’s concept that it would be interesting to have people living on the bodies of two giant gods.

Yes, that’s right. We began by making models of the two titanic gods, Bionis and Mechonis , and the planning developed from there.

At what point did you make the models?

July 2006 would make it prior to the release of Wii. That means it’s now over four years since those models were made. What did you do after that?

The next thing we had to decide was the nature of the game system, and what kind of story to come up with. We made what’s called ‘Vision’ in the game a major theme, with a hero with the ability to see into the future taking centre stage. We then followed the story of how he comes to change the world.

To what degree had you developed the game system and story before you presented it to Nintendo?

We didn’t spend all that much time on it. I seem to remember that while (Yasuyuki) Honne4 was kneading the clay for the models, I was working on writing up the initial plans. 4Yasuyuki Honne is an executive at Monolith Soft. At Square (now Square Enix), he was involved in the development of the Super Famicom title Chrono Trigger in 1995. After retiring from Square, he went to Monolith Soft and has worked on the development of games such as Baten Kaitos for Nintendo GameCube.

Out of interest, what was Kojima-san working on at that point?

I was deeply immersed in the development of Disaster: Day of Crisis. I remember catching sight of Honne-san making the models and thinking: ‘What’s he doing, messing around like that!?’ (laughs)

And I wasn’t the only one who thought that! The whole dev team were wondering why someone was making models at the office.

I’m sure you were wondering what he thought he was doing, when everyone else was rushed off their feet! (laughs) 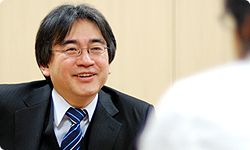 Right! (laughs) And that wasn’t all: he’d get younger members of staff to pose for him so he could model the position of the gods on them.

Wait a second. Just to clear up any possible misunderstanding, the young staff weren’t just posing so that we could model the gods on them. We were also trying to determine what each pose would offer us in terms of fields of play for an RPG. For instance,

Video: if the god’s leg was stuck out, the upper leg could be used as a plain

I’ve been joined today by members of the Xenoblade Chronicles dev team from both Nintendo and Monolith Soft.
if the god’s leg was stuck out, the upper leg could be used as a plain , or the section of the back which the sun shines on could be a jungle . And conversely, the section shaded from the sun could be an arctic area , and so on...
Iwata:

So by having the younger staff members pose, you were trying to make the model, while at the same time thinking about the particular features of each field.

That’s right. Our tale begins on

Video: the calf of the god

I’ve been joined today by members of the Xenoblade Chronicles dev team from both Nintendo and Monolith Soft.
the calf of the god , and then gradually climbs higher and higher up the body. The gods are connected by their swords, so you can cross the sword bridge to get to the Mechonis side , where a totally new world will open before you. That’s the way our vision expanded as we made the models in a corner of the office. But I’m sure that if you just caught a glance of us as you walked by, it would have looked like we were just messing around! (laughs)
Next