2. Working on a Weekly Cycle

You said that someone from outside the industry was able to offer a different perspective, but can you give specific examples of this advantage coming into play?

For instance, for a 22-minute episode of an anime series, the script would be about 15,000 Japanese characters long. So if Takeda-san wrote a section of the scenario of that length, we’d know that this would make about 22 minutes worth of story content. This made it much easier to plan the overall structure and schedule.

Takeda-san spoke a little earlier about how, when he was working on anime scenarios, he would make the section leading into the commercial break or the cliffhanger at the end of an episode exciting. Well, when I came to read the scripts he wrote, I’d be able to tell: ‘Ah, okay. There’s a dramatic point here on the fourth page.’ When we were sifting through the cut scenes, deciding which ones to use, we would take pages three and four of the scenario to be about five minutes worth of material, and we would then steadily ramp up the excitement over that period. We could then judge how best to space out the cut scenes to keep costs down over the subsequent five minutes. In that way, we were able to use the script itself as a set of guidelines, which really helped.

So simply by looking at the script, you could get a clear image of how it would unfold when you made the actual game.

Yes, that’s right. And because Takeda-san came from the world of anime, I was most excited about what he’d do with the sections where the scripted lines were spoken. There are certain scenes where I’d think: ‘I want the characters to say this...’

So you had your own general idea of what kind of lines you wanted to tie the scenes together.

Right. But Takeda-san would come back with much better lines and scenes than I had managed to come up with. So I’d think: ‘Ah, so you’ve come up with this twist... You win!’ (laughs) Then I’d think: ‘Next time, I’ll come out on top!’ We constantly repeated that process.

That really is just like playing catch. When a ball comes back to you that surpasses what you predicted, it’s going to sting your hand a little when you catch it! (laughs) But you’re still happy about it, and you really want to throw a good ball back. Why do you think that this process ended up working so well? Just because both of you are really putting your energy into it, that doesn’t necessarily mean it’s going to work out. Would you say that you just had a good connection, or that you shared similar opinions on what worked and what didn’t?

I’d say that the kind of genres we like are pretty similar, whether in novels or films.

Yes, that’s true. We share similar tastes. What we consider important as consumers is very similar.

So when you read a book or watch a film, you can really relate to what the reader or viewer is going to like.

Yes. But in fact, the approach we take as creators differs quite a lot.

Right, it definitely isn’t the same.

Ah, I see. So while your judgment of what’s good and bad on the input side is extremely similar, your views of what the angle and contents on the output side should be is completely different.

That’s right. And this meant that when I wrote the scenario and had it revised by Takahashi-san, his approach would seem incredibly fresh. I’d think: ‘Ah, so you can do things that way too!’ So I feel really lucky that I was able to collaborate with someone who is a completely different creative type. 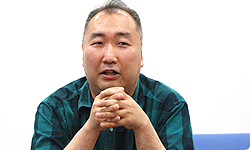 So we worked like that and did as much as we could between ourselves. We would then deliver the polished scenario we had come up with to Nintendo for them to check over. Then when that came back, we saw that they had picked up on some really unexpected aspects, and we couldn’t help going: ‘Arrrgh!’ (laughs)

(laughs) So Nintendo managed to throw a completely different ball into the mix, from a completely unexpected angle!

Exactly! Nintendo really picked up on a huge number of issues.

I’d imagine that from your point of view, Nintendo’s input must have felt like outsiders getting involved. How did you actually feel about it?

My attitude when making Xenoblade Chronicles was that we should be greedy and not stint in adding anything to the game which would benefit it. This applied not just to the scenario, but to every aspect of the game, including the music.

So you didn’t stint in adding elements that would make the game rich and varied, while also being of a high quality.

Right. And the scenario was no exception. Takeda-san and I had put the scenario together by ourselves, and I think that while it was rock solid from certain angles, from others, we had absolutely no defences...

And it was just these vulnerable elements that Nintendo picked up on.

Yes, that’s right! (laughs) As Takeda-san and my tastes and influences often converged, there would be aspects which we were completely convinced were good, but then we’d be told, for instance, that it was hard to follow. There were quite a few instances where we’d be made aware of things: ‘Ah, so you can also look at things in this way...’ 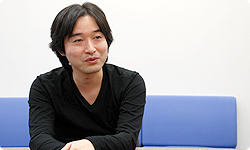 That seems like the relationship between an author and their editor.

Yes, you’re absolutely right. I think it’s vital to have the more objective viewpoint of an editor when you want to make something that will appeal to a broad section of players, and not just a limited audience. In that sense, I was really grateful for Nintendo’s input.

But of course the task of creating something can be a very harsh and unforgiving one, particularly at its more extreme edges, and your views can’t always be in perfect harmony. Did you not have any major differences of opinion?

There were hardly any major differences of opinion. But when you get scripts that have piled up, you’ll often end up with all sorts of things that don’t quite match your expectations, because of all the time that has elapsed while they were being written. You can easily end up with lots of cases where you’re going: ‘No, that’s not it at all!’ For that reason, we agreed to working by breaking it down into manageable chunks: ‘This time, we’ll go up to here’.

How exactly did you do that?

Once a week, on Thursday, we’d gather here and have a meeting about the scenario.

I see. So by keeping things on a short cycle, and by keeping the game of catch on a small scale, you’d be able to communicate any problems you had promptly and solve them without delay.

Right. For that reason, there weren’t any major differences of opinion between the two of us personally. Those scenario meetings were also a lot of fun. I’d find myself wondering just what kind of ball Takeda-san was going to throw my way this week.

I’d also imagine that having a meeting once a week provided a good goal to work towards and helped you keep things going at the right pace. But wasn’t this pretty tough on Takeda-san? After all, he had to pitch a good ball at an eager and expectant Takahashi-san.

No. I’ve worked mostly in weekly television series, so for me this kind of work was...

Ah, of course! Working on a weekly cycle is your forte! (laughs)

That’s right. So I was grateful that we worked at a very comfortable tempo for me.

How long did this game of catch end up continuing?

Well, it took place at the same time as the development of the game, so I’d say it lasted about a year.

That’s right. So we had these pretty intense meetings for around a year, while at the same time various people’s ideas were reflected in the script. Now when I look at the final scenario, I can’t really tell where my ideas end and the ideas of others come in.

Right. Although the ideas of a lot of people are in the mix, and the scale is huge, the final scenario is incredibly well balanced.