1. Playing a Game of Catch

This interview focuses on the scenario for Xenoblade Chronicles, so I’ll be speaking to the man responsible – the scenario writer, Takeda-san, alongside Takahashi-san. Thank you very much for joining me.

Let me start by asking about the models on the table. Takahashi-san, am I right in thinking these represent the point where Xenoblade Chronicles began? 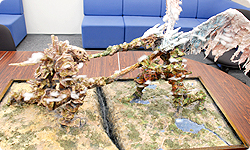 That’s right. I was heading back to the office after a meeting, and as I was on the train, I was struck by the idea that it would be interesting to have people living on the enormous bodies of some kind of gods. That was where it all began.

Did it feel like that idea struck you out of nowhere?

Yes. As soon as I was back to the office, I got the idea down on a piece of paper before showing it to (Hirohide) Sugiura1 and the others. They all thought it looked interesting, and (Yasuyuki) Honne2 was good enough to offer to turn it into a 3D model. So he rushed out and bought lots of materials for creating dioramas and made it. This model focuses on the two towering gods: Bionis and Mechonis. I’d also had an unrelated idea for a story, and I thought that if I could successfully combine the two, it might well make for an interesting RPG. This is how the planning process for Xenoblade Chronicles got started. 1Hirohide Sugiura is the Representative Director of Monolith Soft. After retiring from Square (now Square Enix), where he had worked in a number of roles, including as a producer, he founded Monolith Soft together with Tetsuya Takahashi in 1999. 2Yasuyuki Honne is an executive at Monolith Soft. At Square (now Square Enix), he was involved in the development of the Super Famicom title Chrono Trigger in 1995. After retiring from Square, he went to Monolith and has worked on the development of games such as Baten Kaitos for the Nintendo GameCube system.

So we’ve heard how the development of Xenoblade Chronicles got started. Could you explain the process by which Takeda-san came to work on the scenario alongside you?

As I was Executive Director for this project, I knew that my workload was going to get pretty heavy. To make the development process more efficient, I thought it would be a good idea to have a partner with whom to collaborate on the scenario. That’s when I got in touch with Takeda-san, whom I’d known for ten years. 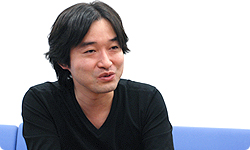 Was this the first time you had worked together this closely?

After the first episode of Xenosaga3, we collaborated on the scenario for audio and anime versions. But in terms of working together on something of this scale, this was a first for us. 3Xenosaga Episode I: Der Wille zur Macht is an RPG released by Namco (now Namco Bandai Games) in February 2002 in Japan.

I’d like to ask you, Takeda-san, what kind of projects you have worked on as a scenario writer up to now?

Most of my work has been writing scenarios for anime4. I have also worked on a number of games, but my job was to take the original animation scenario and create a base scenario which could then be made into a game. In terms of working on the entire scenario for a game, as I did on this project, my first experience was the Nintendo DS version of Xenosaga5. This project was the second. 4Yuichiro Takeda has worked on many scenarios for anime series, including The King of Braves GaoGaiGar, Banner of the Stars, Zipang and Superior Defender Gundam Force. 5Xenosaga I & II is an RPG for Nintendo DS released by Namco (now Bandai Namco Games) in March 2006 in Japan. 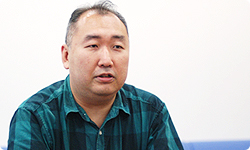 I see. While we’re on the subject, I wonder if you could tell me what writing scenarios for anime and writing for video games has in common, and how it differs. I’m sorry if that seems like rather a naïve question...

No, not at all. What scenarios for anime and games have in common is that you have to come up with a story and lines that will really draw people in emotionally.

So they both share the need for that dramatic element.

That’s right. But there are a lot of differences on the technical side. With an animated feature, there are time restrictions, and you have to create a drama that will fit within those designated limits. I’d say the biggest difference between working on video games and writing for anime is this restriction on volume.

I see. So for instance, with a half-hour episode of an anime series, you may only have 22 minutes of broadcast time. This means you have to construct a story that will fit within those 22 short minutes, demanding the technical skill to get those dramatic moments and climaxes at the exact right moments.

Right. It means, for instance, that you will put an exciting development just before the commercial break, or have a cliffhanger to make people want to watch the next instalment. You need to use these sorts of techniques. On the other hand, with video games, you can fit a large-scale story in there, and there aren’t really any limitations. It’s nice for a scenario writer to be able to write to their heart’s content.

Would you say that when working on games, though the restrictions on volume may have been removed, that you feel conscious instead of the limitations of your powers of expression?

I would say so. But at the same time, games are now capable of communicating so much expressive power that I don’t really feel overly conscious of those limitations. Having said that, there are very particular issues that come into play due to the fact that the player is controlling the action himself. For instance, when working on the scenario for Xenoblade Chronicles, I considered the idea of having one of the hero’s allies, who had always stood beside him, becoming the enemy you face at the end.

So though you’d always thought he was an ally, at the very end, he would turn out to be your enemy.

Right. But when I floated this idea to Takahashi-san, he thought that it would be pretty galling in a game if an ally that you had been through all sorts of adventures with, and constantly worked on building up their experience, ended up leaving your party and becoming your enemy.

From the player’s perspective, you’d feel betrayed if the character you’d looked out for and levelled-up turned out to be an enemy.

Precisely. It might be easy to make that kind of plot development work in an animated series, but video games present a range of difficulties due to their interactive element.

So there are limitations specific to games. 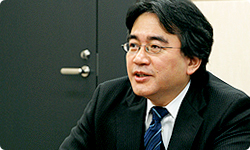 No matter which medium you are working in, there will be particular restrictions inherent in that medium. By thinking of this in terms of being bound to the medium by certain conventions, rather than being hampered by limitations, I was able to enjoy creating the scenario for this title.

Now, Takahashi-san, when it came to actually writing the scenario, how detailed were the instructions you were giving to Takeda-san?

I did not give any detailed instructions in the beginning. At the preliminary stage, I explained the basic premise to him and we agreed on the approach to take. We then took that as our base and conducted a to-and-fro discussion as if we were playing a game of catch.

So as the two of you played catch, the scenario steadily took shape.

Do you usually play these games of catch on your projects?

No, I haven’t done it all that often. I mean, there’s a time when you try to play catch where you throw the ball but not get it returned in the way you’d expected.

So I take it you’ve had past experiences where the ball didn’t come back in the way you wanted, and you wanted to say: ’No, not like that!’ (laughs)

Right. It would be something like: ‘Where did you throw it!?’ (laughs) That’s why, when you play catch, you need someone who is at least as experienced as you are, otherwise it won’t go according to plan.

Also, when you’re creating something, you need to play catch with a partner who understands what you’re doing and who has something that you yourself lack. Otherwise, it can be really draining.

That’s true. So to put it another way, when you find someone who has a range of abilities that you don’t possess yourself, you’re going to want to play catch with them.

And that person was Takeda-san?

Yes, that’s right. I hadn’t really come across someone like him before, and he was good enough to throw that ball back to me really well. I really learned a lot. He also had the advantage of being able to offer the perspective of someone outside the gaming industry, having worked for so long in anime.