2. Towards a Common Goal

So Kiyota-san, you managed to get involved in this project through an introduction from the person working in the office.

So as well as writing songs, you also sing.

That’s right. When Dog Ear Records asked if I’d be interested in composing music, I put my hand up right away and said I’d do it for sure. So I leapt right into this project.

You seem really happy about it! (laughs)

Yes, I’m just so...! (laughs) The thing is, I’ve loved games ever since I was a child, and when I was in secondary school, I played games that Mitsuda-san and Shimomura-san worked on. That’s why I’m so happy I had the opportunity to work with them on this title. 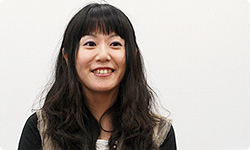 And today you’re able to sit together with them here...

(laughs) I’ll ask in detail about how you composed the music a little later, but first let’s turn now to Ace+. CHiCO-san, could you introduce your three-person team?

Certainly. Together with Tomori-kun, who is sitting next to me, we form a unit called Ace. Then, by adding Hiramatsu-kun to that unit...

Exactly! We worked this time round as a three-person team. My background is in theatre, and in addition to acting, I would select the music to play during the performances. I got into music composition as music I’d made myself fitted the lines and story better than pre-existing songs, and it was faster to come up with the music myself. I gradually moved from the theatrical world towards the musical one, and ended up working for a music company. The president then asked me if I’d be interested in coming up with the music for a video game, and the first game I worked on was Minna de Tamagotchi12. I’ve stayed involved with video games and, in addition to writing music, I’ve also recently sung on the main theme of Luminous Arc 3: Eyes13, which Mitsuda-san worked on as producer. 12Tamagotchi 64: Minna de Tamagotchi World is a party game for Nintendo 64 released by Bandai in Japan only in December 1997. 13Luminous Arc 3: Eyes is a tactical RPG released for Nintendo DS in Japan in December 2009, published by Marvelous Interactive.

Minna de Tamagotchi was released on the Nintendo 64 system, so that’s a fair while ago now.

Yes, it is. It’s about 13 years ago now. It feels like I’ve been working on music for games ever since then.

And how about you, Tomori-san?

Well, it’s more or less identical to CHiCO’s story. I was originally a guitarist, and like CHiCO, I worked on making the music for Minna de Tamagotchi. Ever since then, I’ve remained deeply involved in this industry. 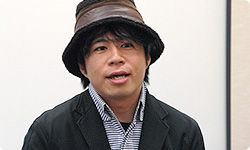 So you’ve only been making music for games?

No, I do a range of things, and have at times performed, and at other times worked on songwriting. Now my base of operations is Ace, together with CHiCO, at Universal Music, while at the same time, in addition to games, I continue to write songs for other artists and soundtrack films and commercials.

So you work in a wide range of fields. Now, finally, let’s turn to you, Hiramatsu-san.

I’ve also really loved games since I was a kid. When I was at elementary school, I would enter musical scores from magazines into a computer at our house and play around making my own music. Ever since forming a band at high school, I’ve been totally addicted to music and that’s how I’ve ended up where I am today. Now, in addition to doing the composition and arrangement for TV commercials and films, I play backing keyboards and do sound programming for different artists. By having the opportunity to be part of this project, I’ve been revisiting those times when I used to get totally absorbed in video games, and have really enjoyed seeing what kind of music I can come up with now. 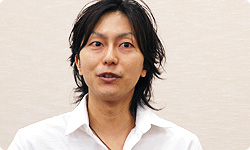 Thank you very much! (laughs)

And I’d say he’s what you’d call a hardcore gamer. That meant that when we were making music, he wouldn’t just be thinking about things from a sonic perspective, but would also refer to the most intricate details of the game’s story, saying things like: ‘This actually means this...’ (laughs)

So his role in the team was to tap his vast store of knowledge...

That’s right! (laughs) So for Ace, he really was a huge plus!

Out of interest, how many songs are there in total in Xenoblade Chronicles, Takahashi-san?

There are around ninety songs.

You said it really casually, but that’s a huge number of songs. So much effort goes into writing just a single track.

You’re right. That’s why we needed six musicians working on it.

I see. Now, listening to what you’ve all just told me, I can see that there are those among you who have been exclusively involved in making music for games for many years, while at the same time, there are others who have musical interests outside the gaming world. I think that gives you a breadth of experience. Takahashi-san, could you tell me more about the way in which you went about commissioning the songs for this title?

You’d known him so long that you felt able to leave him to it.

Right. But with this title, we had six musicians, each with their own specialist fields and style. I knew that just letting each of them have free reign to follow their own instincts would lead to a really disjointed overall feel to the soundtrack. 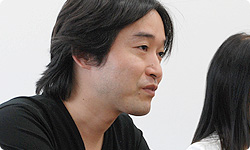 That’s precisely what I intended to ask you to begin with. When you gather people who haven’t worked together before, you need to keep their individual talents while not losing overall coherence in the music... Well, it’s easier said than done, isn’t it?

Indeed. So I started by constructing a clear image in my own mind of the kind of music that would fit with the atmosphere in each scene. So even though I feared it might seem rather rude, I handed out lots of samples, saying: ‘For this scene, we need music with this kind of feel.’

So you used samples of already existing songs to convey the kind of atmosphere you were looking for in the music.

That’s right. But at the start, I’m afraid to say that the results really weren’t good at all.

They were overly influenced by the samples and they weren’t able to create distinctive-sounding music. So it was a very involved process: repeatedly pointing out how not to do it, allowing space for each artist to bring out their own personality, while at the same time plotting a single direction for a unified final product.

And did you always have the final say?

Mitsuda-san, you’ve worked together with Takahashi-san on many occasions, so I’d imagine you knew the drill...

But for Kiyota-san and the others, you would have a request made for music with a certain feel. You would then nervously present your effort, only to be told it wasn’t right...

How did you feel at times like that? Weren’t you scared?

I was really terrified! (laughs) We’d upload a track and wait for the response to come via email. It was just like waiting to see your exam results put up on the notice board. There’d be times when we’d get praise, and then you’d be overjoyed...

So when you were praised, you’d be over the moon.

But more often than not, it would be no good.

Would you then feel really down?

Well, the thing is, we had a deadline to meet, so you’d be focussed on that. You’d be walking round the house, trying to give yourself a pep talk: ‘I’m going to write a great song! I can do it!’ 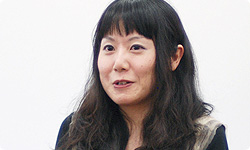 But it was a really educational experience because whenever we were rejected, Takahashi-san would tell us very clearly and precisely how we should modify the music.

Would you say that he brought out the best in you?

I’d say that there were moments of real discovery: ‘Wow! I was able to write a song like that!’

So Takahashi-san was able to draw out strengths that you didn’t know you had.

Yes, that’s exactly what it felt like. I’d never come up with a piece of music that had unease as its theme. Thanks to Takahashi-san drawing out all kinds of things, I was able to write a variety of songs about unease: ‘Unease I’, ‘Unease II’, Unease III’ and so on...

So you were able to come up with a range of pieces just based on the theme of unease. (laughs)

Well, there are many different types of unease. There’s extreme unease, minor unease, the unease a man feels... If I kept asking for them, we’d get more and more examples.

I also wrote pieces themed on terror and horror. When you write music like that, you can’t help being sucked into them. So when you’re composing a piece themed on unease, your mind will become more and more troubled until you think: ‘If he turns this down, I’ll have a breakdown!’