Tennis, golf and baseball were the only three sports in the version of Wii Sports that we announced at E3. Now bowling and boxing have been added and there are five sports to choose from. Could you tell me about this development?

The primary reason was the fact that Wii Sports is a product that will be sold worldwide. As you just mentioned, it was already determined from the start that tennis, golf and baseball would be included in the package. Tennis and golf are sports that are enjoyed around the world, but it concerned us that baseball isn't very big in Europe. At first we thought that three sports provided enough variety to allow anyone to enjoy the game. However, in countries where baseball isn't normally played, there would effectively be only two sports to choose from. So we realised that the game needed more variety, and we started thinking about other sports that we could add.

We were trying to think of sports that are known throughout the world that most people have played before. We also wanted to add sports that even mothers, who might not play sports very often, would want to try out. This led to the idea of bowling, and as usual we had the programmers make us a demo right away. (laughs) They worked on it for a few days, and when we had a chance to try it out everyone fell in love with it as soon as the ball started rolling down the lane. So, we decided to go ahead with it.

Around the same time, a plan was also put together for boxing, another sport that is enjoyed around the world. Since the Nunchuk and the Wii Remote are both going to be included with Wii, it's possible to hold one in each hand, and we started working on it so we could try this idea out. Honestly speaking, we were only going to use either bowling or boxing depending on which one turned out better. But once we had made some progress on the prototypes, we realised that we had created two games that worked so well that we couldn't choose between them. We got a little ahead of ourselves and joked about saving one of them for Wii Sports 2, but in the end these games were so good that we wanted to get them out to the public as soon as possible. We also felt quite strongly that we wanted to tell the world right away how much fun they could have bowling and boxing on Wii. So we ended up asking the programmers and designers to go ahead with both of them! 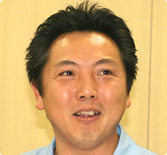 So they thought you were only going to request one, but in the end you asked for both. Weren't they a little surprised?

Yes! (laughs) But now everyone is very satisfied with the decision to add both of them. I think we made the right decision.

Hearing all this, it seems that everyone had favourable feedback during development. However, I can imagine that you might have been a little anxious until people from outside the company had a chance to play these games. Was this true for you, Eguchi-san?

Hmm… I actually wasn't that anxious. It might be because I'm personally not a big fan of realistic looking games…

After all, you are the one who made "Animal Crossing"! (laughs)

Yes, well I am the type of person who loves changing my character into new clothes, putting on a hat and going fishing! (laughs) So I feel that rather than spend money trying to pursue a photo-realistic game experience, I would rather focus on conveying the freshness of the Wii experience to our customers. Of course, it isn't possible to predict whether or not these games will be accepted by everyone around the world, but after seeing the response at E3 it became apparent to us that users were enjoying it in the same way we thought they would. From that point on, we were able to continue development without hesitation.

I guess you could say that I wasn't anxious at all either! (laughs)

So, you were more confident than anxious?

Well, yes. Everyone had confidence in these games, but for me that confidence wasn't about getting people around the world to play them. For me it meant that I felt sure I could get my family to play these games, even my wife who never plays games, or my daughter who is still in preschool and doesn't have good hand-eye co-ordination yet. Or perhaps even my wife's friends, and their husbands. You know, before you have a family of your own, you end up spending most of your time with people who have similar interests as yourself, and this tends to limit the group of people you make games for. But once you have a family, you end up meeting new people that don't necessarily share the same interests as you. Before I had a family, I was always thinking of people similar to myself when I made games, but now I have a strong urge to make games that will also be liked by these new people around me, people that don't normally play games. That's why, when I was making Tennis for Wii Sports, my first reaction when I saw how much everyone liked it was thinking that the non-gamers around me would play something like this. For me, it wasn't about whether it would sell well or be a worldwide success. I was only thinking of the people around me, and that I would be satisfied if they were happy playing it. 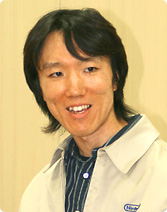 That's exactly what we mean by expanding the gaming population, isn't it?

It is. And the result is that the people coming to the exhibitions are really enjoying themselves.

What about you, Yamashita-san? Were you anxious or confident?

Well, I wasn't completely at ease, but I was looking forward to seeing everyone's reactions, feeling free of responsibility in a sense. During E3, games with unbelievable graphics using an incredible number of polygons were lined up in the surrounding booths, and I could barely contain my excitement just thinking about putting Wii Sports next to them.

And what about you, Shimamura-san?

Honestly, I was a bit anxious, but when I saw the reactions of everyone at E3 first-hand I became very confident that it would be a success. For example, when I was standing next to the demo stations and watching visitors play Wii Sports Baseball, they were giving each other advice such as "keep your elbows down when you swing." (laughs) Of course, this itself has nothing to do with the game, but since it's easier to swing naturally and get the timing right if you have good form, I think it actually makes it easier to hit the ball in the game. Seeing this kind of interaction, I was able to imagine parents and their children having the same conversation. More than anything else, this is what made me feel that our efforts were worthwhile. Also, there was an American who had probably spent the whole day walking around E3 and, after playing Wii Sports Baseball, suddenly turned to me and said excitedly "I've seen a lot of games with realistic graphics, but this is the most realistic thing at E3 this year! This is actually real!" (laughs) And I wasn't even wearing a uniform or displaying an exhibitor's pass. I was just there as a normal visitor! 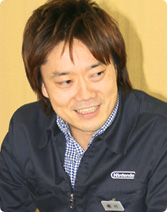 When we have people come in to try out the games, we find that they pick up on them more quickly if they have actually played these sports before. So you will find that a father who has been playing baseball for a long time will be better at the game than his son who loves playing video games.

This would be unthinkable with conventional video games, wouldn't it?

Absolutely. When I heard that story, I knew for sure that these were games that everyone in the family would play.

These games will be played across generations, won't they? I can imagine there being more conversations where, for example, a grandfather tells his grandchildren "You know, I used to play a bit of tennis myself."

Sure. At first glance, it appears that cute doll-like characters are playing sports, but these games have been designed so that when a person who has actually played the sport picks up the controller, they can tell how similar the game is to the actual sport.

Something like this also happened during the Wii Preview event. There was an older gentleman who had a very good score in Baseball. When I asked him, he told me that he used to play baseball. This was obviously reflected in his score, which was very high.

No kidding! How old would you say he was?

There was also a lady in her 60s who was unusually good at Bowling. When I talked to her, I found out that bowling was very popular when people her age were in their youth. So she had a kind of natural ability, the right feel for the game. Without even explaining the mechanics of the game, she already knew how the ball would turn and where to aim, and the pins just kept falling.

During the Wii Preview, when I saw an elderly gentleman smiling to himself while playing golf, I felt immense pride in our work. I am sure that with a conventional controller, people like him would never have played our games.

There were a lot of older people at the golf booth, weren't there? Among them was a group of executive-looking types wearing smart suits, and when someone sliced his shot he would lament to himself "I sliced it again!" or "That's what always happens!" Strictly speaking, their stance shouldn't have anything to do with whether or not the shot curves in the game...

For me, the most impressive story of that kind is the one about tossing the ball in tennis.

That was really something, wasn't it? (laughs)

Before E3, we had a few internal people play the game for the first time, and they really started to get into their tennis match. They were holding the Wii Remote in their right hand, and before you knew it they were using their free left hand to try to throw an imaginary ball up for a serve!

Of course they weren't holding anything in their left hand, so this motion didn't affect the service in the game. But I could understand why they were doing it! (laughs)

It was really unforgettable! (laughs) It really made me realise what a good product we had made.

There's another episode that I don't think any of you have heard yet. Before going to E3, Nintendo's Board of Directors had a chance to play Wii Sports. All of them are older than me and they were playing in front of a huge plasma screen. When they were playing, they would sometimes start running towards the screen while swinging their remotes! (laughs)

That made me think "We've got something pretty awesome here!" (laughs)