1. Fun For the Entire Family

Lying at the heart of Wii are the "Channels", a concept unexplored by any other console. I'd now like to discuss the background behind their development, but rather than start by discussing individual Channels, I've gathered three of the people who helped to lay the foundations of this project. Gentlemen, please introduce yourselves briefly. Starting with you, Aoyama-san.

Thank you. I manage a development group within IRD. Although this division is normally responsible for the development of hardware, my particular group is in charge of developing the equivalent of what would be called the OS on a PC.

Here at Nintendo, this is what we call the IPL, or Initial Program Loader, isn't it?

That's right. I was in charge of the team that decided what IPL features and system functions would be contained within Wii.

I'll ask about your team in a little more detail shortly. In the meantime, Kuroume-san, please introduce yourself.

In other words, if someone is creating some kind of menu, they'll come and talk to you. You've also handled the startup screens of a number of consoles, haven't you?

Yes. Wii is the third one I've worked on after the GameCube and Nintendo DS.

So, your job is to deal with the first screen that is displayed when you start up the console. Finally, Tamaki-san.

I was in charge of the direction of the Wii menus and the "WiiConnect24" project. I also helped manage projects concerning system functions.

You were conceptualising Nintendo's next console release well before the Wii project officially started, right? It might be fair to say that you've experienced more Wii presentations, both internal and external, than anyone else!

Broadly speaking, you three are the core members of the IPL project, which determined what kind of functions would be contained in the console. First, however, it might be somewhat confusing for readers accustomed to existing game consoles to understand what we mean by a "system function", so Aoyama-san, could you please give us a brief explanation?

Certainly. When talking about the IPL, it might help to imagine the screen displayed by the Nintendo DS immediately after it starts up. Software inserted in a Nintendo DS won't load right away. Instead, the user will be taken to a menu where they can choose to load a Nintendo DS title, a Game Boy Advance title, or the pre-installed PictoChat program. This kind of system software, used to start other programs, is known to us as an IPL, or Initial Program Loader. As I said earlier, it's equivalent to a computer's OS, containing system settings such as the clock etc. For all systems up to and including the GameCube, IPLs worked in the background, and were simply used to start up software or configure the system. With the DS, however, because it included the "PictoChat" software, the user became more aware of the IPL's existence. So, it might benefit the reader to think of the Wii IPL as a greatly expanded version of the DS's. 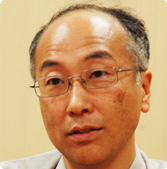 In other words, the Wii console itself has a variety of built-in functions. We created a cross-departmental team to determine each and every one of these functions, didn't we?

Yes, Wii's system functions could not be clearly defined as strictly "software" or "hardware", so I assembled as many as 25 experts from a whole host of divisions, and… well, we had meeting after meeting.

I also did my best to attend the meetings. When was it they started?

It must have been around October of last year. The development of Wi-Fi Connection was coming to an end, and until then, the system function issue had been discussed independently by each division. We thought of bringing order to this discussion by making it into an official company project. That's how the meetings started.

Aoyama-san, you were appointed leader of this project. How did you feel when you were given this responsibility?

Well, I remember thinking to myself, "this is going to be tough!"

Not only was it without precedent, we were faced with the formidable prospect of discussing the very framework behind this concept from the ground up. Later, when it was decided that Wii would "never sleep", then we had to discuss what such a console should be able to do, and immediately came across the problem of providing tangible services, and establishing a network infrastructure and servers.

What specific task were you assigned when the project started?

Umm…what was it now? (laughs) Er, well, I always had a hundred different things on my mind, so umm… I can't really say anymore! (laughs)

My first task? Let's see… There was a heck of a lot going on back then, wasn't there?

I mean, I remember us all talking about what we wanted to do, but my very first task…?

(laughs) Kuroume-san, how about you?

I haven't a clue anymore!

Well, let's just say that you finally settled upon the current features after a lot of hard thought. (laughs) Kuroume-san, you've worked on a number of IPLs. What is it that sets Wii's system functions, now called "Channels", apart from previous consoles?

Needless to say, when I started working on the Channels I had absolutely no idea what form they would eventually take. With the Nintendo DS, I clearly remember struggling to cut out all the features I wanted to fit in, but couldn't. For Wii, however, I had to organise the features without knowing where any of this would lead. The only thing I really understood was how big a responsibility this was! 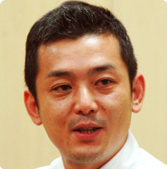 Going back to the initial days of development, I remember receiving a variety of proposals from Tamaki-san. He'd be saying, "make it something like this", or "perhaps you should do that"… He was always so passionate in his advice! (laughs)

So, Tamaki, you're very "passionate"? (laughs)

Man, this is so embarrassing! (laughs)

Nonsense! I think your passion contributed greatly to the Wii project. Share with us some of your initial suggestions.

Well, this is going back a bit, but when I first entered the company I often said that I wanted to make the sort of games you could play with your grandmother. I had an image of games not feeling out of place in the living room. Of course, this could have been around the fireplace, at the dining table, the coffee table, or anywhere. I just wanted to make a game that would be fun for the entire family. Recently, I've found myself sitting all alone, starting up a game and feeling a bit cut off from the world. I wanted to change this. That is, I wanted to make gaming a little less lonely. In my mind, the Wii Remote belongs on the coffee table. I spent a long time discussing with a whole range of people about what we could do to achieve this. For the system function project, we were discussing a similar vision. 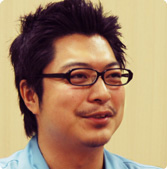 In the meetings to determine the system functions, where did your discussions actually begin?

We started by talking about everything! (laughs) One of the things we had to sort out was deciding what kind of style was best for character input. So we tried out the system used in Animal Crossing,” we tried displaying an entire keyboard on-screen, and we even tried a mobile phone-style keyboard...

We also talked endlessly about technological issues, such as the simple question of whether we could get the IPL to start up faster, didn't we? Like, how many seconds could we save on a certain screen, that kind of talk.

As we talked, the concept of "fun for the entire family" gradually took form in our minds. We didn't want any member of the family to feel left out, either through not understanding the Wii or feeling it had nothing to do with them. An all-too-common trend in gaming is for the user to play a game they like for hours and hours until they complete it, and then never touch it again. This was something we wanted to avoid.

A game won't be accessible to all the family if it's only one family member playing it all the time. At the end of the day, the other members of the family who aren't playing never get a chance to be drawn into the action.

Therefore, our working concepts were "fun for the entire family", and "a console that will be used every day". We tried to make sure that our discussions never strayed far from these concepts.

Can you remember which of the current features was the first to take shape?

I can't be absolutely sure that this was the first feature to take shape, but I remember that the Forecast Channel was finished in order to clearly show that Wii would be on 24/7. You wake up in the morning, switch on Wii and the weather forecast will be updated. This was an invaluable resource in explaining Wii to people unfamiliar with the concept.

The News and Forecast Channels certainly convey our "entire family" and "something new every day" messages in an understandable way. So, next I'd like to ask how the individual Channels came into being.