Today I’d like to ask you about Wii U Chat, Wii U console’s video chat function or TV phone, if you will. We’ve touched on it briefly in past presentations, but we didn’t have the chance to really give it a thorough introduction, so I wanted to speak with you about it today. First off, please introduce yourselves.

I’m Tamiya from the Network Business Department, and I was in charge of overseeing the Wii U Chat project. 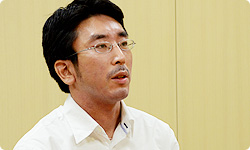 I’m Watanabe from the Design Technology Group. I was in charge of the library1 for Wii U Chat. Thank you for having me today.1. Library: When a program with a certain function is standardised and turned into a component to be read by another program. A library cannot work on its own, it only functions as part of a program. 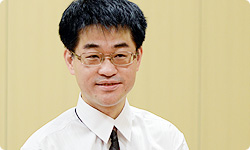 Watanabe-san, you’re coming from the Design Technology Group, a very small section within the Integrated Research and Development Division, which is responsible for creating Nintendo hardware. Your department performs research on all kinds of technology for possible use in future games, and Wii U Chat was one of those.

Could the two of you tell me how Wii U Chat came about?

Well, (Genyo) Takeda-san2 had been interested in pursuing a TV phone-type capability for years, and we in the Integrated Research and Development Division decided that we wanted to add that capability one day.2. Genyo Takeda: Senior Managing Director of Nintendo and General Manager of the Integrated Research and Development Division. He is responsible for hardware development at Nintendo. Previously appeared in: Wii hardware, Wii Remote, Punch-Out!! and Wii U console.

Yes. I actually remember hearing a lot about Takeda-san’s feelings on that subject back during the era of the Nintendo 643 system, which would have been about 15 years ago, before I was with Nintendo. (laughs) Just like the caricature concept4 with Miyamoto-san, it was a theme that Takeda-san had been contemplating for a long time.3. Nintendo 64: A home video game console released in June 1996.4. Caricature concept: Shigeru Miyamoto’s concept of creating caricatures of yourself and people you know so they can be used in video games. This concept has been realised with the Mii Channel on the Wii console.

So as the development of Wii U was moving along, and we started talking about adding a camera, we began to look into communication technology with NTD5 and Vidyo6, an American company that specialises in video conferencing systems. And then around the end of last year, we concluded that we might be able to make it work.5. NTD (Nintendo Technology Development Inc.): An American technology research and development group led by Howard Cheng based in Redmond, Washington.6. Vidyo, Inc.: A video conferencing systems manufacturer established in the US in 2005.

The Wii U GamePad has an internal camera, but it doesn’t have an external camera. So that means emphasis is placed on it being used in conjunction with something like video conferencing software. How did you end up working with Vidyo?

Vidyo mainly provides video conferencing systems for business use, and Takeda-san knew someone who worked there.

Takeda—san certainly seems to have a lot of connections around the world! You could say that the Takeda connection does it again, right? (laughs) What part of Vidyo’s technology was particularly superior?

Let me try to give you a simple example. When there’s trouble with the network during a video chat, you get block noise.77. Block noise: A type of compression occurring in a digital video, where the image looks pixilated.

Yes, you do. Depending on the degree of congestion on the Internet, things like how fast the data can be transmitted, and the likelihood of an error occurring are not guaranteed and the outcome varies dynamically depending on factors such as how many people are accessing it at one time. So when something is wrong with the connection, like it being congested, with typical video compression technology you will see block noise as a result and video interruption.

With Vidyo’s technology, their communication method is capable of monitoring the connection status in real-time and automatically adjusting the signal to the optimum bitrate so there’s a minimal amount of interruptions. Because of this, when there’s a problem with the network, the resolution is lowered slightly, but you can still watch the video without noticing much of a difference. I think that’s a huge thing.

Internet communication takes place within an unstable environment, so if there’s a difference in the speed at which the information is sent and received, part of the data may not be received. They are using their technology to avoid this so there won’t be a breakdown, no matter what the situation is.

Yes. Within Japan, there’s been an increase in areas with a good network connection, so you may not notice it as much. Overseas, there are still a lot of areas with older lines, but it enables you to be able to keep a certain level of quality to all video chats, even with somebody in one of those areas. 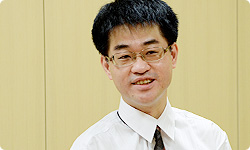 It makes me want to have everyone make friends overseas so they can test it out!

Also, once the connection has been established, we made sure that the rest of the session can go on without it contacting the server. Being able to use a P2P8 connection means the likelihood of the system having a problem occurring even when many people around the world use it is less. 8. P2P connection: An abbreviation for “peer-to-peer” communication, a method of data communication where each user’s terminals can connect and communicate directly, rather than have the communication relayed by a server. There are systems that are completely based on a P2P connection where it takes longer to initiate a connection, and a supernode type where the communication requires intervention of a third party terminal. Wii U Chat utilises a hybrid-type where the initial connection is established by the help of a server, and from there the two units would communicate directly.

I see, otherwise server fees would incur and we wouldn’t be able to offer this servicefor free. By the way, Tamiya-san, did you come into play after the technological foundations were established?

That’s right. I had received notification from Nintendo of America (NoA) that a team at Next Level Games (NLG)9, with whom we had a close connection with, had an open line. They asked if there was anything we could do with it, and we were just discussing, “Maybe we could do built-in video chat?”. It made sense for the project, so we decided to pursue it officially.9. Next Level Games Inc.: A video game development company based in Vancouver, Canada. In the past they have worked on games such as Super Mario Strikers (GC), Mario Strikers Charged (Wii), and Punch-Out!! (Wii). Currently they are working on Luigi's Mansion: Dark Moon for the Nintendo 3DS system.

Tamiya-san, could you tell the people reading this interview what you did before this?

The Nintendo Zone Viewer was actually developed in collaboration with an overseas company, right?

Yes. We developed it with the Project Engineering Department, which is one of the departments at NOA.

When it comes to working with people from overseas, there’s a language barrier, and sometimes a lot of cultural differences. Didn’t that make communication difficult?

That’s true. But this time, we had a bilingual member of staff from NOA who used to work with us on the technology programming of Nintendo Zone Viewer, and they helped coordinate things for us, which helped us out tremendously in that regard.

Even though, there were times when you had to meet face to face and decide on the direction of things. To do that, you went there several times.

I did. Roughly every three months, I had to go and stay there to meet face to face with the team so we could discuss the direction. Going there allowed the project to move along efficiently, but it also helped me to understand the overseas team, getting to know their characters and their ways of thinking. Knowing those things helped quite a bit after I came back to Japan, when we continued talking via email and when we held video conference meetings.I may be exaggerating, but I think the impression you get when communicating via emails compared with an actual visit are quite different. A video meeting is something between the two.

Oh, that’s exactly the Mehrabian’s rule that was discussed in the Iwata Asks: Miiverse: The Developers. It’s hard to get your emotions across using words alone like in emails. In that sense, with a “TV phone”, while it doesn’t replace actually meeting in person, as long as you’ve met, you can get much more across than you would have by just communicating over the phone or via email. Tamiya-san, you continued the development feeling this first-hand?

Yes. Working on this project made me realise just how important it is being able to talk face to face.

Also, with this software, the director was Japanese, but most of the members were from overseas, so this project was made the opposite way to how we usually do things: the overseas version was made first and then localised for Japan.

Previously, when developing software at the same time as hardware, departments within Nintendo Japan were in charge of the majority of development. But thanks to Tamiya-san’s previous experience, we are now able to work together with a lot of external teams like this on what used to be handled by just the internal teams. By the way, Watanabe-san, were you able to smoothly integrate Vidyo’s technology into Wii U?

No, that actually took some doing. The software was structured in stages so it was easy to build it into the Wii U library. But even though Vidyo had a great track record with computers, this was the first time it had applied its business-orientated technology to a video game console.

Game consoles don’t have the breadth of features and libraries that are standard to an OS12 on a computer. That’s the fun and challenging part of building an embedded system13.12. OS: Short for ‘Operating System’, the software in charge of the entire computer system.13. Embedded System: A computer system initially built to perform specific functions. Compared to a generic system for PC, in the case of video game hardware, these systems need to be specifically built for the hardware.

That’s right, especially because during the early phases of development, things like the Wii U OS and the network functionalities weren’t in their final form. At the start of this year we had Silicon Studio14 in Tokyo help us out with optimising the moving parts. And then we were somehow able to meet the deadline for this schedule.14. Silicon Studio: A Japanese developer mainly involved in the development of middleware for game content. Established in 2000.

I’m sure if you had done all that work yourselves, it would have either taken a lot longer or it would have affected your ability to develop the software internally. So this project really made good use of past connections and chance encounters we had with others.