When it comes to a service that many people can participate in, a good example is Flipnote Studio.16 Kondo-san and his team have shown that if you do it right, it can stay active for a long time.16 Flipnote Studio: Software in the Nintendo DSi and Nintendo DSi XL systems for drawing and writing notes with the stylus. Multiple notes can be played in sequence to resemble flipbook-style animation. By connecting to the Internet, users can share their Flipnotes with others.

It doesn’t look like everyone in the world knows it, but the number of users for Flipnote Studio kept increasing.

When development of the Miiverse server began, I went to meet Kondo-san. That was for two reasons: one was that we had been in touch for Flipnote Studio and the other was that I had received a proposal for a network service from him.It wasn’t the same as yours, Mizuki-san, but the content shared similarities. So I thought if we were going to develop this, I should talk to Hatena first since they had made this suggestion to Nintendo. So I reached out to Kondo-san.

That’s right. The inspiration for the proposal was Flipnote Studio. The Flipnote Hatena17 site gained more and more active users by allowing the awarding of stars and posting of comments.18 Then I realised that gamers also want to communicate more. Cooperating with my friends as a child to beat enemies in Mario. Bros.19 has stuck with me as a sort of a core experience of fun gaming for me.17 Flipnote Hatena: A website accessible via computer or Nintendo DSi browser. It allows users from all over the world to enjoy flipnotes created by other people in Flipnote Studio.18 The awarding of stars and posting of comments: Users of Flipnote Hatena can post comments on the flipnotes they like or simply award a star to convey their appreciation. 19 Mario Bros.™: An action game originally released for the Nintendo Entertainment System™ in 1983. 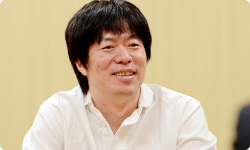 It was fun talking about video games with friends even when you weren’t playing them. That’s another fun aspect of playing games.

Yes. I enjoyed time with other people through the medium of video games, so I felt like if we used the Internet, we would be able to connect and play more with people in the world. So when this was brought up to me, I thought, "The time has finally come!" (laughs)

It made an impression on me, Mizuki-san, how at the first meeting you said that Kondo-san’s comments were incredibly helpful. Where exactly did you feel empathy??

First, it was about how existing network service communities were interesting. To be honest, at the time, I wasn’t so sure about giving communities a central position. But when I heard what Kondo-san had to say, I became convinced it was the way to go.

Yes. Another thing was what he said about the hierarchical structure of network services. He talked about how existing network services are the first level and then there’s a more open structure on the second level. On the first level, you interact more comfortably with people you know and on the second level, you interact on the basis of shared interests and sentiments with people you don’t know personally. The input from that discussion is a big reason that Miiverse assumed an open format to the point that it is now.

Miiverse also has a twofold service structure. In one part, you communicate only with those you allow to talk to you and in another, you interact with anyone who has the same interest.

Something that made an impression on me was the viewpoint that maybe the social graph20 for existing network services and the social graph for game network services are not the same. You talked about how people may not always want to talk about video games with people they already have a relationship with through existing services. Those words played an important role for me in deciding to create our own social graph from scratch.20 Social graph: A chart showing the personal relationships between people on the Web using a specific social media outlet such as an SNS (social networking service). They often indicate relationships based on real human relations in the actual world.

Is that so? The existing network services may have realistic aspects but in real life, there are many times where you also come into contact with people who aren’t acquaintances. Therefore when developing a new service, it’s necessary to provide opportunities for encountering people with the same interests and talking with them about those interests.

When you hear the phrase "real-life social graph," you might think it includes all real human relationships. But if you really think about it, real life doesn’t only include actual acquaintances. That’s because you also interact with strangers a lot in the real world.

Yes. Also, especially on America’s social networks, I feel like there is an idea that you should have one personality. But the reality is different.

An American friend of mine said, "On the Internet, people are always watching, so you have to be consistent about what kind of a person you are – it’s difficult to let loose even in private time". In that respect, we all live in a visible world because of how common social networks have become. While that world may be convenient, it can also be constraining in ways that didn’t exist before. 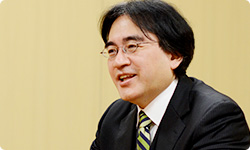 I understand. You punch in bland comments like "Happy Birthday!" without a thought. (laughs)

Right, right! (laughs) But I think that such variety – having a self who interacts with friends and a self within video games – is good.

I suppose a lot of people hit the ‘Off’ switch when they don’t have to interact with real life acquaintances and assume different personalities.

For that reason, there is a trend among social networks that you must use your real name. The Miiverse, however, doesn’t specify that. You can simply display your Mii nickname.

While it’s extremely rare, communities can break down because of rude people taking advantage of anonymity. Using real names is a way to put the brakes on that. But if you are tied together by empathy, I feel like real names become less important. I think it is important to be tied together by shared sentiment that way.

Something I noticed while working with (Shigeru) Miyamoto-san, who created Mario, is that he exerts tremendous tenacity when making something so that people will feel empathy towards it. I think that’s why it is so representative of Nintendo that the theme of Miiverse is resonance.

That’s why it’s a "empathy network." I just now realised what those words really mean! (laughs)

I just realised something, too! (laughs) Miiverse has a 'Yeah' button that you can push if you empathise with someone's comment.You do not simply agree with a particular comment; it’s also about two people who have played the same game sharing the same feeling, so the empathy is double.

That’s right. If you emphatise with each other, it becomes easier to exchange thoughts and opinions and if you interact, video games become more fun. So if more people who don’t know each other can empathise through Miiverse, the chances increase for people to encounter games suited to them. That was a strong motivation for me in advancing this project.

Well… to be honest, I didn’t completely understand the concept of shared empathy. I was, however, able to think about the specs around that key word. In any case, if we had only focused on the key word "social" and worked as hard as we could to establish a single-layer network only focusing on the first layer, the service would have turned out differently. But empathy also involves connecting people who don’t know each other, which gave rise to the idea of adding the second layer too. 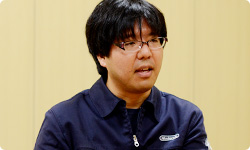