3. Easy To Hold With Both Hands

So while you were engaged in a bitter struggle with the gyro sensor, tell me how you decided on the shape that the Wii MotionPlus accessory would take.

At the start of the development process, it looked like this. It's very different from the design of the finished product.

The first thing we thought of was naturally how comfortable it would be to hold. That was why we chose to make it as compact as possible. But in the end, to prevent the Wii Remote slipping from players' hands when they are waving it energetically, we slightly expanded the bottom to give it a kind of skirt shape. On top of that, safety considerations led us to combine Wii MotionPlus with the "Long Jacket". The idea of combining them to ensure safe usage was something that came about after E3 2008, wasn’t it?

That’s right. But the prototype we put together at that point had a skirt shape with a very gentle curve, meaning that it could become detached very easily.

And from the point of view of maintenance and repairs, we were unable to use any adhesive to secure it.

That’s why we made the skirt wider so it was a kind of flange shape such as you would get when fitting a car tyre to a wheel. That’s how the final shape ended up like this. You really did combine it very snugly with the "Long Jacket", didn’t you? (laughs)

By making the skirt wider, it makes it much less likely to slip out of your hand when you shake the Wii Remote vigorously. This was a very important consideration.

It’s a little like the grip end of a baseball bat.

That makes sense. And out of interest, what do you make of the fact that the length of the Wii Remote has increased?

Well, it has made it very comfortable to grip with both hands.

I think that games where you hold the Wii Remote with two hands, such as golf and baseball, have become a great deal easier to play. Though with the original Wii Remote, there were players who swung the bat using only one hand! (laughs)

That’s why we thought we could have afforded to make it even longer! (laughs)

So while the electronic engineering team were doing battle with the gyro sensor, the mechanism design team also had some awkward problems to contend with.

Yes, you could say that! (laughs) Since we’re on the subject of connecting the accessory, the bottom of the Wii Remote has an external extension connector for connecting the Nunchuk and other accessories. On either side, all you have are holes. Yes, there are two holes to lock accessories to the Wii Remote.

So we thought about using these two holes and tried to secure the Wii MotionPlus accessory using hooks. But those holes were not originally designed with the purpose of connecting Wii MotionPlus in mind. They were actually designed for a separate purpose, which was attaching accessories in a less secure way.

So the designers hadn’t envisaged something like Wii MotionPlus which would be attached firmly to the Wii Remote.

Moreover, they hadn’t envisaged that the area where the devices were connected would be gripped tightly and shaken repeatedly.

That’s why we had cases where there would be temporary disconnection of Wii MotionPlus during use.

So the accessory would disconnect from the Wii Remote just for a brief instant.?

That’s right. So at that point we looked to investigate further by trying to reproduce this temporary disconnection by twisting and turning Wii MotionPlus. But it wasn’t something we could do by only twisting it slightly.

Without shaking the Wii Remote tens of thousands of times, this temporary disconnection wouldn’t reoccur.

But you weren't really going to shake it thousands of times to test this, were you? (laughs)

Well, at the start I gave it a go, but after a while the skin on the palm of my hand felt like it was peeling away. And that’s when the gloves went on.

You really went that far? (laughs)

But doing it that way would have been far too time-consuming. So it was at that point that we decided to borrow shop-front display models for Pokémotion4. (laughter) #

4 Released by the Pokémon Company in Japan in August 2003, Pokémotion was a “communication tool” shaped like a glow stick. By utilising flashing LEDs, it left images on the eye allowing users to see various Pokémon and words when it was waved rapidly.

That’s the shop display where the Pokémotion is swung like a metronome.

Ah yes, I remember that.

We scraped together all the models we could, from our Okayama office and various departments within the company, and then used them to carry out tests.

It’s lucky there were still so many left! (laughs) 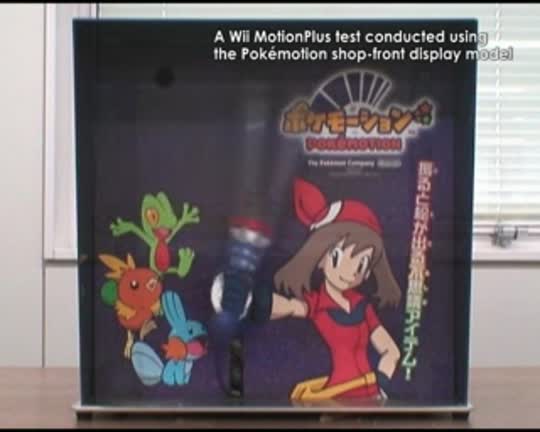 The conclusion we came to was that the plug for Wii MotionPlus was attached completely rigidly to the connector on the Wii Remote.

So it was attached very firmly with no room for give.

Right. Which is why after waving it repeatedly, it inevitably placed a strain on the connector.

If you were to connect it to any normal peripheral it wouldn’t be a problem, but in the case of the Wii Remote, because it’s a product where you actually grip the connector and wave it repeatedly, it was impossible to avoid a heavy strain being put on it.

Which is why this temporary disconnection occurred.

We experimented with a variety of possible solutions, such as putting oil around the connector or leaving a small gap open but...

But you kept hitting dead ends.

Yes we did. So we experimented with redesigning the Wii MotionPlus connector plug so it fit more loosely into the connector as a way of avoiding placing strain on the connection.

So it was a bit like fitting the plug with suspension.

The technical term is a “floating structure”. We used the trial equipment to carry out tests on that structure and the rate of temporary disconnection declined dramatically. So we felt we were on the way to solving the contact problem. But then, just at that point...

What happened at that point?

The connection hooks used to lock Wii MotionPlus into the holes at the base of the Wii Remote snapped.

I see… Up to that point, the accessory had been connected in three places: by the plug and the two hooks. But once you’d redesigned the plug so that it was a floating structure, too much strain ended up being placed on the two hooks.

That’s exactly it. So we thought there was no solution except to reinforce the strength of the hooks. That’s why we used steel hooks.

But we went a bit over the top in reinforcing the hooks’ strength...

...And this time the holes in the Wii Remote broke!

So even those steel hooks didn’t end up working out for you! (laughs)

It was at that point that someone suggested adding a tray-shaped section on the reverse side to integrate the Wii MotionPlus accessory and the Wii Remote more fully...

It sounds like a splint for a broken bone! (laughs) But by doing that, wouldn’t you make it more difficult to hold?

Yes, it becomes too bulky.

So how did you finally resolve this one?

We decided to use a type of plastic which was very durable and could withstand the repeated strain.

The cost of the materials increased, but we were all able to breathe a sigh of relief at that point.