3. A Wii Balance Board with a Tail

I think one of the major problems you might have had with Wii Fit was coming to an agreement on the design style. For example, the main motif of Wii Fit was at one point blue11, to go along with the Wii motif. It was blue at July’s E3, and then you were suddenly asked to change it to green. 11 The main motif of the Wii Fit screens presented at the Nintendo Conference on October 10, 2007 in Japan.

Actually, it was still blue at October’s Nintendo Conference.

(with a shocked look) …So it was. I’m really sorry that had to happen! (laughs)

It was on the day before the Conference that talk suddenly shifted to changing the motif to green. I had a feeling that this was going to happen eventually, and had kind of resigned myself to it. It felt like green was gaining more support as time went by.

Even the Nintendo Conference brochures were green.

Things started to take on a greener sheen just after E3. I’d chosen blue for Wii Fit because it has this pure, clean image and it’s also the Wii motif, but for a while I was worried that it lacked the punch that a truly original product needed. That’s why I decided to change the colour to green in the final stages of development, but I think it worked out in the end, especially since green works perfectly as a motif for health. 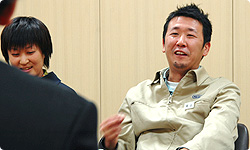 And we appreciate your hard work! (laughs) Moving on, I understand that you had decided early into the project that players would be using Mii characters in Wii Fit. But even if the concept of Mii characters works perfectly in Wii Fit, you can’t really include too many elements of the Mii world in the game design. Then you have a male and female trainer who look and move realistically and an anthropomorphic Wii Balance Board character. One little design mistake, I think, would have made all these disparate design elements look clumsy. What problems did you have in trying to integrate everything?

Well, for example, we couldn’t have Mii characters lead the Muscle Workouts and Yoga exercises. For example, I can’t imagine them raising their arms in the Tree Pose because their arms are just too short! (laughs)

And besides, it’s not like you could create a realistically-proportioned Mii for these exercises! (laughs)

That’s why we decided to use realistic models for the trainers.

There was initially some talk about using real footage of trainers in the game rather than creating them out of polygons, wasn’t there?

Yes. We liked this option because it would have made the movements of their muscles and clothes clearer, as well as their facial expressions. The problem with this option is that once you’ve filmed the footage, it becomes really difficult to change it later on. It also makes it impossible to view the actors from different angles. That’s why we decided to use 3D models instead. Because we were working from the initial idea of using real footage, we initially attempted to make the models look realistic. Their skin colour looked natural, and they wore realistic clothing. We soon realised, though, that in the world of Mii characters and the Wii Balance Board character, these realistic trainers stood out too much. On a whim, we tried removing the skin colour from the trainers, and it worked surprisingly well. We showed the new trainers to everyone else, and most people found they liked the trainers better that way, so we decided to stick with the colourless skin. Even then, we weren’t quite sure whether customers would warm to the relationship between the Mii characters, the Wii Balance Board character and the trainers. We discussed the issue with the others on the team and concluded that the main character of Wii Fit was, obviously, the customer; in other words, their Mii characters. The main character in the game world would be the Wii Balance Board character. But because of the way this character looks, it couldn’t possibly demonstrate yoga poses and other exercises. That’s why we created a scenario in which the Wii Balance Board character was hiring the two trainers to teach the players what it couldn’t teach itself. 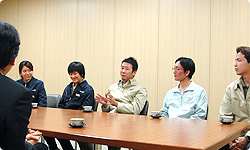 Ah, so the Wii Balance Board is the boss of the two trainers! (laughs)

Once we’d created this scenario all the pieces started to fit into place, and we had an easier time developing the game.

I think one of the major problems you might have had with Wii Fit was coming to an agreement on the design style. For example, the main motif of Wii Fit was at one point blue 11 , to go along with the Wii motif.
a flexible, nimble fellow ? You don’t expect an accessory similar to bathroom scales to be soft and stretchy! (laughs)
Oyama:

It’s the kind of joke that developers like to insert in games, and we wanted the Wii Balance Board character to occasionally perform actions like that. But then we got an e-mail from Miyamoto-san saying, “I didn’t realise the Wii Balance Board was so light!” Of course, as he pointed out, an accessory similar to bathroom scales could never be that light, so we put some limits on the type of actions we could make the character perform. That’s how we ended with the current incarnation of the character.

I see. That gives you some insight into the level of realism that Miyamoto-san cares deeply about. He probably sensed that watching the Wii Balance Board character flying past would have jarred with the fact the actual Wii Balance Board isn’t all that light. Still, I find it interesting that someone who had been working on Zelda enemies for a long time would work so hard on making a plain white board fly around. It makes me really look forward to the next Zelda game! (laughs) 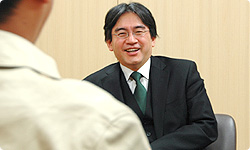 Oh, right, sorry about that. One small comment12 from me caused that tail to disappear. 12 The Wii Balance Board was originally designed to connect to the Wii Remote, but one comment from Mr Iwata that he couldn’t see anyone kneeling down every time they need to plug in and unplug the Wii Remote caused this idea to be scrapped. See Vol. 1: A New Creation for details.

A tail makes it much easier to give the Wii Balance Board character a personality. For example, if it’s happy, all we need to do is have it wag its tail.

But even if the lack of a tail was bad news from a design perspective, I thought it was the right decision because removing the cable made the Wii Balance Board much easier to use. Still, I was then faced with the prospect of giving personality to a simple rectangle, so I decided to give the Wii Balance Board character a lot more flexibility. 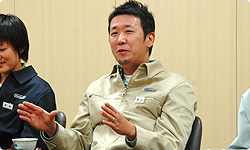 I see. By the way, I heard that the Wii Balance Board character originally employed just the one female trainer, and that you added a male trainer when Miyamoto-san suggested that you do so.

What he actually suggested was that it’d be interesting to add a slightly chubby middle-aged man with a strong personality. (laughs)

A chubby middle-aged man! (laughs) That sounds like something only Miyamoto-san would come up with.

There were some suggestions to include more than just two trainers, but including several trainers would have just made the whole thing too chaotic. I just wanted to keep the number of trainers to two, and have players focus more on their training.

As they should, since the goal of Wii Fit is to get people interested in managing their health and exercising every day.

Also, by staying with just two trainers, we were able to add a lot of detail to each trainer. For example, their hairstyles change depending on the month, and if they tie their hair back during the week they’ll let their hair down during the weekend.

Really? I hadn’t noticed that.

That was my goal. Instead of making the trainers eccentric, I wanted to add subtle bits of character that only the really observant would appreciate. Of course, it’s not much of a secret now that I’ve gone and blabbed away about it all! (laughs)