Now, I’d like to ask you a few questions about the software itself. In Wii Fit, players can

Video: select a male or a female trainer

Early versions only had a female trainer! (laughs)

That’s what happens when you have a bunch of men working to make a fitness game! (laughs)

That’s why I told them, “All kinds of people are going to be playing this game, guys! You need to include a male trainer too!” And then they complained because that meant going through the same process all over again. (laughs)

There was a lot of fine detail that had gone into that trainer, so the idea of creating a second trainer really didn’t appeal to us. We used motion capture6 to track the movements of the model to give the trainer a realistic feel, which became especially important when showing the trainer’s breathing throughout the Yoga exercises. But even motion capture can’t track the subtle movements of the stomach during breathing, so we had to manually add those movements ourselves. As you can see, creating just one trainer involved a lot of work, so you can imagine what creating two was like. 6 Motion capture is a form of technology used to input data on human movement into a computer by attaching sensors to every part of the body.

I normally train with a male trainer, but then one day I was greeted by the female trainer instead, who told me, “Hope you don’t mind, but I’ll be standing in for your regular trainer today.” I was stunned that you’d even prepared little events like this! (laughs)

If that feature made you that happy Iwata-san, I’m glad we went with two trainers! (laughs)

(laughs) The trainers only appear in certain sections of the game, but how did you develop the sections that didn’t involve trainers? There seem to be quite a few of those.

In the early stages, we were creating prototypes of games that were to later become the Balance Games. Since I’d been making nothing but games in the past, I found it easy to get into this part of the development process. It was during this time that I remembered Miyamoto-san mentioning the idea of a

Now, I’d like to ask you a few questions about the software itself. In Wii Fit, players can select a male or a female trainer to guide them through many of the exercises.
skiing game , so I started by working on that. There were also a lot of other ideas that we brainstormed with each other.
Iwata:

Did you have any ideas that you thought would be great, but didn’t work out in the end?

One of the prototypes was a game called Trampoline that I was so sure would turn out great. It involved bending and straightening your knees to simulate your character jumping on a trampoline. But when I tried making it, I had a difficult time developing the mid-air motion of the character. Even worse, others asked me, “Where’s the fun in that?” (laughs) I was unable to develop it into a playable form, and it got scrapped.

How about the opposite? Did you develop anything you didn’t think much of at first, but then actually enjoyed when you tried playing it?

In the planning stages, I was lukewarm on

Now, I’d like to ask you a few questions about the software itself. In Wii Fit, players can select a male or a female trainer to guide them through many of the exercises.
Hoop Twirl , and none of the other developers were all that keen on it either. But then when we made it and tried playing it, we really enjoyed ourselves.
Iwata:

And Hoop Twirl’s actually a decent workout as well. I was shocked after my first few tries to learn that my hip rotations in one direction were so much smoother than in the other.

You certainly don’t see people randomly swinging their hips like that! (laughs) Speaking of which, Miyamoto-san apparently really wanted Reggie7 from NOA to demonstrate Hoop Twirl during the unveiling of Wii Fit at this year’s E38. So he approached him with this idea during a meeting to discuss E3, but Reggie was too embarrassed and refused to do it. That failed to put off Miyamoto-san, though, because whenever we met with Reggie after that, he would ask him again to demonstrate Hoop Twirl. And, again, Reggie would refuse! (laughs) 7 Reggie Fils-Aime, president of Nintendo of America Inc. Also appears on stages and makes presentations when Nintendo holds press events in the US. 8 A video game conference held annually in the United States. The Wii Fit was unveiled at the E3 in 2007.

But even that failed to put Miyamoto-san off, because come the day of unveiling, he asked Reggie once again during the rehearsal of the press conference. (laughs) I was certainly impressed by Miyamoto-san’s tenacity.

I think even Reggie knew by then that he couldn’t avoid the issue any longer, so he gave some excuse about his back hurting! (laughs)

But I think you were right in your judgement that being able to see someone doing Hoop Twirl would be a real crowd pleaser, which you proved the other day during the Nintendo Conference9. What you couldn’t realise in America, you succeeded with several months later in Japan! (laughs) 9 Nintendo Conference: A presentation held on 10 October 2007 at Makuhari Messe in Chiba Prefecture, Japan. The MC, Miho Nakai, along with guests Shinji Morisue and Sayo Aizawa, performed Hoop Twirl on stage.

But the one thing my colleagues kept telling me was, “You really shouldn’t make the president do that!” (laughs) So I guess by refusing to do Hoop Twirl, Reggie was making a wise decision on behalf of NOA! (laughs)

Now, I’d like to ask you a few questions about the software itself. In Wii Fit, players can select a male or a female trainer to guide them through many of the exercises.
Jogging , but this was originally developed by a different team and wasn’t included in Wii Fit until the final stages, was it?
Matsunaga:

Now, I’d like to ask you a few questions about the software itself. In Wii Fit, players can select a male or a female trainer to guide them through many of the exercises.
Step Basics , which we had included in the Balance Games, in a new category called Aerobic Exercises.
Sugiyama:

There was all this media coverage about metabolic syndrome10 at the time, and I thought that a lot of people would be looking for activities that would require them to exercise for a long time. That’s how we ended up creating this new category of Aerobic Exercises. 10 Metabolic syndrome is a variety of conditions such as high blood pressure, high cholesterol, insulin resistance and obesity that increase the risk of heart disease and diabetes.

Miyamoto-san didn’t bring up Jogging until about July, telling us that it really worked well and he wanted it included in Wii Fit. We were just putting the finishing touches on Wii Fit at the time, and to make matters worse, Jogging was still in its experimental stages and was still using provisional backdrops for the jogging courses. So we would have to make those from scratch. Well… (gives a look of resignation) there was nothing we could ask but, “Now?” (laughs) 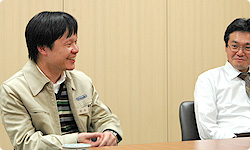 July? That was just a little while ago! (laughs) Besides, Jogging doesn’t even require the Wii Balance Board. You just put the Wii Remote in your pocket and jog. Didn’t you tell Miyamoto-san off for that? Something like, “You’re the one who told us to base all the games on balance!” (laughs)

Still, we completed that surprisingly quickly once it was decided that we were going to include it in Wii Fit. Besides, everybody in the company seems to love Jogging.

Yes! In fact, I do Jogging nearly every day. (laughs) It’s so much more motivational to watch a TV screen while running than watching nothing at all.

The realism of Jogging really came out for me when I registered the Mii characters of everyone in my family. It makes you feel good when you see your family members pop up during Jogging. And when I have to work away from my family, my kids can play Jogging and see my Mii running beside them and think of how hard I’m working! (laughs)

On the other hand, whenever the Mii of a family member passes you, they turn around and smile at you, which can be a bit frustrating! (laughs)

The Free modes in the Aerobic Exercises are pretty good too.

It was definitely an idea that I eventually wanted to be developed.

We were always planning on including Free Steps, but it wasn’t until the last minute that we decided to include Free Jogging. (laughs)

In other words, just before Wii Fit was completed...which was really only recently! (laughs)

I guess the Free modes are geared more towards older users. It’s something you do more out of a need to make up for a lack of exercise than for fun. I myself am a regular user! (laughs)

It’s sometimes hard to find the time to exercise when you’re so busy with work. In that sense, the Free modes are great because you can exercise while doing something else at the same time.

Maybe we could have also included a Free press-up game to let users build their muscles while doing other things.