3. The Trials and Tribulations of the Shape

And now, at long last, we get to you Nagareda-san. What was your reaction when Sawano-san and his team brought their prototype to you?

I thought, “What am I getting myself into?” (laughs) It was a thick, square plank of wood with four legs attached to it, and it used two Wii Remotes to send signals wirelessly. Based on that prototype, this is what we came up with. 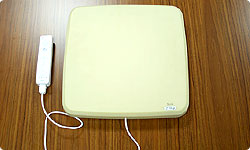 This board is 32cm wide; in other words, too narrow to move around on much. It also required a Wii Remote to be attached to it at all times, like a Nunchuk, and I thought it might be better to have a place for the Wii Remote to be stored. I followed this up with two more prototypes.

The appeal of connecting the Wii Balance Board to a Wii Remote was that production costs would have been low. There wouldn’t have been the need to add things like a power switch, LEDs and wireless functionality. In addition, the Wii Remote has an in-built speaker, and there was something charming about the idea of the Wii Balance Board speaking to you from under your feet. That’s why we continued developing the product in this direction for a while. But there was always the nagging problem of where to put the Wii Remote. We didn’t want people stepping on the Wii Remote accidentally, and it was impossible to extend the cord long enough for the Wii Remote to be held by hand.

Did you ever think of attaching the Wii Remote to the bottom of the Wii Balance Board? 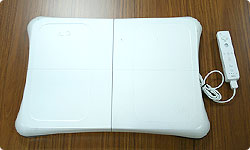 The suggestions kept changing from one to the next, didn’t they?

They sure did. I thought this must be Miyamoto’s upending of the tea table that I’ve heard so much about! (laughs)

We did account for these suggestions, but I did think that “upending the tea table” is especially rough for something like hardware development! (laughs)

Last-minute changes like these in hardware development can really take a toll on the process. I suppose it doesn’t help that Miyamoto-san has a background in industrial design and is really demanding when it comes to anything related to design. You must have found it really difficult to cater to his requests.

We had actually created a wider prototype earlier, but we decided it was too large to put in a living room. When Miyamoto-san later made his request for a wider board, he pointed out to us that the design would look better as a rectangle than a square. This prompted us to first establish a board span that was about shoulder-width, and then shrink the length of the Wii Balance Board a little bit to match an average shoe length. We finally had the shape down to what you can see today. The Entertainment Analysis & Development Division had originally given us two demands. The first was that the Wii Balance Board had to be able to measure the daily changes in a person’s weight. If a person drank some juice and gained 200g, the Wii Balance Board needed to be accurate enough to be able to detect that change. The other demand was that it had to be able to detect the shift in a person’s balance. Like Sawano-san mentioned earlier, the Wii Balance Board needed to be able to send 60 signals a second to report the shifting balance of the user.

And in fact, Nintendo does test hardware to make sure it doesn’t break upon being accidentally stepped on. Consoles and portable devices alike get put through the same test. But this must be the first time we’ve created a piece of hardware that’s supposed to be stepped on from beginning to end! (laughs)

That’s certainly true. But we also had to prevent other kinds of risks, such as making it less likely for someone to get injured by falling off it and making sure that it wouldn’t flip over if someone were to stand on the edge. For the falling risks, the best we could do was to design the Wii Balance Board to be as low as possible, so we kept tinkering with the design to see if we couldn’t shed an extra millimetre off without sacrificing the strength of the Wii Balance Board. We also designed it so that the legs round off from the corners of the Wii Balance Board so that it would be difficult to flip over, even if you were deliberately standing on the edge. Finally, because the Wii Balance Board weighs about 3.5kg, which isn’t all that light, we decided to attach a rubber-like material to all four corners to soften the impact if someone were to accidentally drop it while carrying it around. 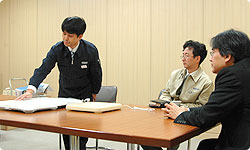 After all these detailed checks, all these demands to make the Wii Balance Board wider and what have you, there was one final upending of the tea table that really caught you off guard, wasn’t there? (laughs)

Sorry for being such a pain at the very last moment! 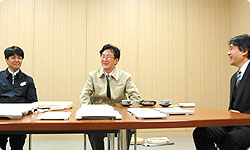 It must have been really rough for your team. I remember there was a lot of talk about how it wouldn’t be ready for distribution within the year if you had to make a structural change like that.

I think scheduling was the most difficult part of this change. First, because we were going to be making a completely separate piece of hardware from the Wii Remote, we would need to get government approval for the module under the Japanese Radio Law. Then there was the worry that, depending on where the module was placed, the signals it emitted wouldn’t pass through the frame of the Wii Balance Board, which we’d made out of metal to strengthen it. So we had to test for that as well. Finally, it was the first time that a controller other than the Wii Remote was going to be communicating wirelessly with the Wii console, and we had a lot of trouble trying to work out how to make the Wii console differentiate between the two signals.

You must have sometimes wanted to shout, “Iwata, you cold-hearted monster!”

Well, um… yes. (laughs half-heartedly) But – and I’m not saying this because you’re sitting right there in front of me – I’m really glad that we created a module for providing wireless functionality. I’m sure there’ll be other Wii accessories that will be developed in the future, and, even if they aren’t connected to the Wii Remote, it’ll be just a matter of sticking the module in these accessories to give them wireless functionality. Future projects of this sort will be much easier, I think.