Miyamoto-san had only told me that the idea for measuring balance came from laying two bathroom scales side by side, so I didn’t know about the sumo wrestlers at all. What a surprise! So, you began researching balance measurement next.

Yes. That’s when we learned that the typical bathroom scales on the market didn’t record data very quickly. It only measured your weight 4 or 5 times a second.

Which is all very well for bathroom scales, but useless for a game accessory. (laughs) After all, video games process 60 images a second. A game accessory that could send out signals only 4 or 5 times a second would make the controls feel sluggish, and it would be impossible to develop games operated by shifting your balance.

For those reasons, we decided that the typical scales on the market could not be used for gaming. We asked our software team to modify the accessory to make it send out 60 signals a second, and a week later they came back with the prototype for the Basic Balance Test that comes up in the beginning of Wii Fit’s Body Test. Everybody quite liked it when they tried it, and even Miyamoto-san was impressed. 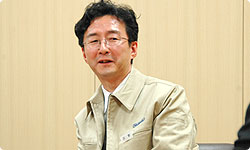 Is that when he decided to base all the games in Wii Fit on balance?

That was much later. At the time, we were just trying to come up with other games while being aware of the left/right balance aspect of the product. Meanwhile, we asked our partners to immediately change the product design to include two sensors.

And it was hard enough keeping the cost low with just one! (laughs)

Yes, it was. Anyway, the first product they created with two sensors was this prototype. 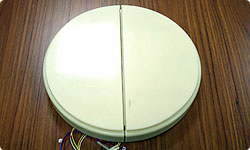 Ah, the first prototype was circular.

Stepping onto this would cause the discs in the rotary encoders to rotate many times. This is what it looked like with its lid off. The two encoders in this prototype are highlighted in red. 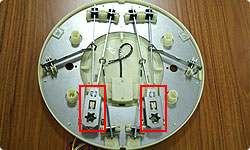 In other words, a depression in the lid would be converted into rotations that would be counted by the optical sensors. And the prototype could even send 60 signals a second.

Exactly, just like with the Nintendo 64 Controller. But after seeing this prototype, I began to feel that being able to measure balance shifts to just the left and right wasn’t enough, and that the accessory needed something more before it could become a genuinely fun product. So I suggested to my software team that we could do a lot more if we added forward and backward balance detection to the product. But they refused. “There’s plenty of fun stuff we can do with just left and right balance detection,” they told me. “There’s no need to add forward and backward balance detection.” But I was convinced that things would get really fun if the product was able to detect shifts in balance in all directions. The board, for example, could be used as a controller for the feet. That’s why I accepted the software team’s opinion as simply their opinion, and began on my own to look into developing an accessory that was similar to bathroom scales but that could detect shifts in balance in all directions, and of course keeping in mind that the cost had to be low. After a lot of brainstorming, this is the product that I had Yamazaki-san build. 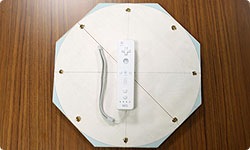 Actually, we just hadn’t taken the time to round the edges because we’d made it in a hurry. (laughs) The Wii Remote would have been set into the centre of the device so that the acceleration sensor9 built into the Wii Remote could measure your balance. That would leave us needing only one rotary encoder for detecting your weight. 9 A device also found in airbag systems for measuring an object’s acceleration.

I see. By integrating the Wii Remote, you’d be able to measure balance shifts in all directions and at the same time keep costs down.

And so we started thinking about designs that would work best for measuring balance and, eventually, Yamazaki-san made me this. 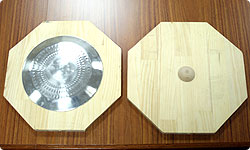 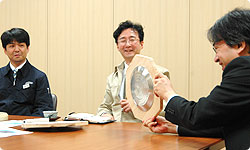 The software team tells you that you don’t need balance detection in all directions, you tell them that you do, and you end up making something like this, using the lid of a saucepan of all things! (laughs)

We started experimenting with the saucepan version, but we soon realised we couldn’t measure balance with much precision. The board itself had become thicker, so it would have been more dangerous to step on top of it. After repeating much trial-and-error of this sort, I started thinking about what would happen once the board was sold as a product. I decided to pay a visit to the Nintendo Customer Service Centre. It was the first time for me to be working on a piece of hardware that was meant to be stood on, and I thought it would be a good idea for me to learn about the procedure for repairs. This was at a time when a tremendous number of DS systems were being sold and, although the percentage of units that were being sent in for repairs was small, it was still a very large number. After my visit, I decided that using a complex design would increase the risk of the product being defective or broken and would be a disservice to our customers. I decided that the design needed to be as simple as possible. 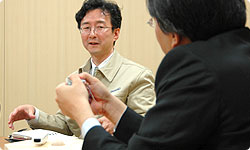 In other words, you realised that even if the price was right, increasing possibility of repairs would have caused inconvenience for the customers.

It was then that we came up with the idea of attaching a measuring device known as a strain gauge10 directly to the legs of the board. 10 A sensor that measures the level of stress applied to an object. It uses the scientific principle that electrical resistance increases in a thin metal wire as it is stretched out.

By moving the weight sensor from the interior to the exterior, you simplified the design. 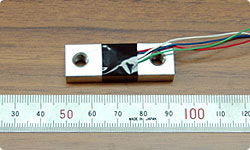 We tried making several prototypes using this concept. By pushing down on the legs, you’re actually bending the metal in them, but you really can’t tell this with the naked eye.

As a strain gauge bends so little and includes virtually no moving components, it has a very low chance of malfunctioning. These gauges do cost quite a bit, but I decided to go with them anyway. Two legs would not have been enough to support the board, so we would need to attach at least three legs to the board. With three sensors, we would be able to detect a person’s shift in balance in all directions, but the board itself would have been very unstable. We had to go with four sensors. Four sensors would be able to detect a shift in balance in any direction perfectly and can measure weight at a high precision. Even the software team that had rejected my earlier decision agreed that this design was better. We had finally arrived at the original form of the Wii Balance Board. 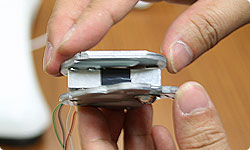 How long had you been working on this idea by then?

About half a year, I think. It was almost as if we worked as hard as we did because it seemed as though only Miyamoto-san was able to see what the final product was going to look like, and yet he had entrusted that vision to us.

And that’s when you decided to pass on the project to the hardware team after you developed the prototype.

Yes. I took the prototype that Yamazaki-san and I had worked on to the Integrated Research & Development Division where Nagareda-san was working.