So basically, the project started with a mere three people, and development didn’t start smoothly, when the only instructions given were to measure one’s body weight and to record the things that one ate.

At first, I’d have them bring me what they’d made, only to repeatedly send them away again, saying things like “No, that’s not quite it”.

At that time, how did you envision the product’s future? 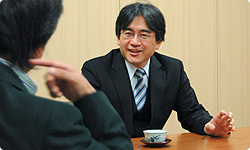 I definitely had an image of family members talking amongst themselves, saying things like “Dad, you’ve put on a bit of weight lately!” Also, I thought that if the face of the person who measured his or her weight appeared as a Mii, the software could encourage the whole family to get together around it.

You mean the idea of family members having fun by talking about each other’s weight, don’t you?

You’d be really happy if your wife and daughter were talking about you while you were out, right?

Much happier than if I was being ignored! Even if it were mostly bad things they were saying about me! (laughs)

I just thought having relationships like that within the family would be ideal. I know this may sound a bit extreme, but measuring your weight is fun, and there are ways to keep fit when thinking along those lines. Though we were trying to move in that direction, we couldn’t decide on what the next step would be and work came to a virtual standstill – until, that is, a member of staff bought two scales, and found that it was pretty good fun to step on both of them at once and try to balance on them evenly. At that point, I asked the programmer to connect two scales to a computer and set it up so that your balance would be displayed on-screen numerically in a way that would be understandable even at a glance. When we did so, we decided to attempt to make measuring one’s balance a theme for the software. We were sure there were methods of keeping fit involving balance, and when we looked into it, they did indeed exist. 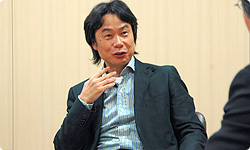 So after a process of trial and error, you learned that balance was the key. At any rate, the experiment you conducted with the two scales was essentially the prototype for the

So basically, the project started with a mere three people, and development didn’t start smoothly, when the only instructions given were to measure one’s body weight and to record the things that one ate.
Basic Balance Test portion of the Body Test9 you do when you first use Wii Fit, right? 9 Measures your centre of gravity, BMI (Body Mass Index) and athletic ability, and based on this will then present you with your “Wii Fit Age”.
Miyamoto:

That’s right. All sorts of things developed from there. As I was working on other titles such as Wii Sports, I asked them to look for sports trainers and researchers well-versed in balance and see if they could supervise the project. It was from that point on that I really thought it had become a true project, but with one major difference, there were still only three members of staff! (laughs)I’m sure they were still thinking “What’s he going to make us do now?”

I think it’s often the case when making something that, even if there are a hundred reasons against it, you’ll still make progress if you have at least one brilliant idea under your belt. What was the process like with regards to Wii Fit?

There were a whole bunch of reasons against it. I think you know this quite well, but I’m the type who picks out all the bad things when setting about creating something. I quite enjoy determining what is good and bad about hardware, because the process of creating something while trying to minimise the bad parts feels like solving a puzzle to me. With that said, since this project had more than its fair share of issues, I felt it was really worth doing. We had all sorts of reasons against the project. What would we do if someone accidentally dropped the weighty board on their feet? Who would want to measure their weight in front of other people? How could people accurately measure their weight with their clothes on? 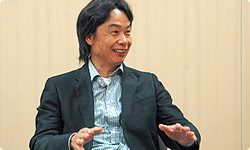 I always say this, but I enjoy making things that are unlike anything anyone has ever made before. Everything you think of becomes a new idea, and even if it’s nothing big, it’s still a new idea. That’s why I always thought of this as an issue worth challenging. I was also convinced that you can have fun just by measuring your weight.

So you were confident that you could make something interesting because you enjoyed simply measuring your weight and collecting the data.

Additionally, I thought this project perfectly suited the Wii concept of involving the whole family. That’s why I felt it was my mission to make it into a full-blown product somehow, and went to all the necessary lengths to eliminate the negative elements connected with it. However, just when development got underway, the scales manufacturers we had talks with didn’t show much interest in the idea. We subsequently decided that we’d just have to go ahead and make it ourselves, fully aware that if we just made it like ordinary bathroom scales you could buy anywhere, it’d be just plain boring. That’s when, after a process of trial and error, we settled on the idea of making it so that you could balance on four points: front, back, left and right, and this in turn lead us to the idea that we could also use it as an interface for a game. While we were busy working on that, the Wii Balance Board gradually took a form that was much more than just ordinary bathroom scales.

When did the idea to balance on four points come up? 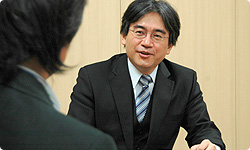 When the planner was putting together a variety of prototypes for us, he initially experimented with using only two sensors. However, to keep costs down as much as possible, he tried removing one of the sensors, but wasn’t able to get results he could be satisfied with. That was when we decided to just go for it and throw in sensors at each of the four points. Though the cost went up, we thought we’d probably be able to absorb the cost by designing it all by ourselves. When we had two sensors, we could only measure left and right balance, but with four, we could measure balance for left, right, back and front perfectly, and it matched the accuracy of the two scales we first started using, so we continued to push the development in that direction. Until that point, the content of the game consisted of a list of sports-based exercise activities, but with this development, we concentrated on training balance.

What kind of experiments did you do when working on the software?

We experimented with radio exercises. We did an experiment where we stepped onto the Wii Balance Board and exercised to see if it would be able to tell if you were really exercising by checking the changes in your balance. Many DVDs related to exercise are already on the market, so when we started thinking about what couldn’t be done with DVD, we hit on the fact that we could check whether or not you were actually exercising. So we continued the experiments while using radio exercise10 music, and by measuring balance we found out we were able to do a lot of things quite accurately. 10 Japanese public radio stations broadcast exercise instructions to music early in the morning for performing warm-up exercises.

Checking whether you’re actually doing it or not appears in Wii Fit in the form of elements such as the trainers' dialogue, right? For example, if you’re in the middle of exercising by standing on one leg, and lose your balance and put your foot down, they’ll tell you, “

Video: Did I see you put your foot down during the exercise?

So basically, the project started with a mere three people, and development didn’t start smoothly, when the only instructions given were to measure one’s body weight and to record the things that one ate.
Did I see you put your foot down during the exercise? ” (laughs) You couldn't do that on DVD.
Miyamoto:

And if a person with a different weight steps on, it’ll tell you “

Video: Your weight seems a bit different from the last time

So basically, the project started with a mere three people, and development didn’t start smoothly, when the only instructions given were to measure one’s body weight and to record the things that one ate.
Your weight seems a bit different from the last time .” It’s watching you! (laughs)
Previous
Next
More information