5. When You Hear “That Zelda Sound”

By the way, in the Twilight Princess interview of the “Iwata Asks – The Wii Hardware” series of interviews, the words “essence of Zelda” came up quite a lot. How much did the DS Zelda team talk about the Zelda theory?

Well, frankly, not much.

But I did think that I didn’t want to get too caught up in making it Zelda-like. There was even an argument about how a train didn’t really seem to fit with Zelda.

Ah, yes, I did hear a little about that. You mean that debate, the one about whether or not it was really all right to have a train in Zelda.

Then people were wondering whether we shouldn’t change the train to something else. Still, we talked to the designer, and to all sorts of people, and we ultimately decided to stick with the train. In the first place, everybody has their own idea of what Zelda is supposed to be like.

Iwamoto-san, if you absolutely had to say what Zelda is like, what would you say?

That’s a hard one.

Well, I suppose if one could put it into words that easily, there’d be no need for everyone to argue on and on about what’s Zelda-like and what isn’t.

True. Besides, there are some things we’ve managed to avoid, in a good way, that we might not be able to avoid any more if we normalised it too much. 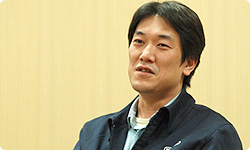 Is it all right if the Producer takes a stab at it, then? (laughs)

Ten years or so ago, the “Hobo Nikkan Itoi Shinbun (Almost Daily Itoi Newspaper)” ran an interview with Miyamoto-san, after he’d made Ocarina of Time. In that interview, there was a bit that made me think, “Oh, so that’s what it was”.

And you didn’t know about the article back when it first came out?

I’d probably read it, but at the time I just thought, “Huh…” (laughs) It’s probably because I wasn’t directly involved. I read it just after finishing the Ocarina of Time job, and at the time, I had no idea I’d keep making Zelda. Only, I was asked in an interview about the period when I was working on Ocarina of Time; it had been a while, and I’d forgotten quite a bit, so I reread the article as a sort of review. And then, among the things Miyamoto-san had said, there was something that really made an impression on me.

He said, “I want people to see that there are no games that compare to this one”. Ocarina of Time was a game where we did things that others would never think to try.

That’s true. Hearing that they tried to make Ocarina of Time a game with such an overwhelming presence that no other game could compare, and that they gave it their very best, is incredibly convincing.

That’s why we made it so detailed. If we didn’t do that much, I thought, the end product wouldn’t be really overwhelming, something other people wouldn’t do. This already came up earlier, but even with the railroad, we experimented with a lot of things at first. Honestly, if somebody had said, at the beginning, “That’s just a pain; let’s not bother with it”, I wouldn’t have been surprised. But doing things simply because you don’t know whether or not they’ll work until you try them… I think that in itself is…

“A thoroughness that others don’t even think to attempt”, you mean.

Yes, that’s it. This time, we were trying for a game that used trains in a way no other game had used them before. So, as Iwamoto-san said before, we had some people asking “A train in Zelda? Are you sure?” But, as far as I’m concerned, trains are just fine. I felt as though, if the train became something that couldn’t be portrayed by anything else, then that would be Zelda. 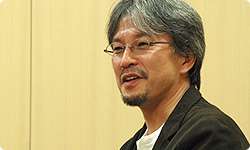 By the way, Iwata-san, what do you think Zelda is?

Well, to me… When I’m playing, and I think “Is it even possible to solve this puzzle?”, and it’s really giving me trouble, but then something gives me a brainstorm and I solve it, and

By the way, in the Twilight Princess interview of the “Iwata Asks – The Wii Hardware” series of interviews, the words “essence of Zelda” came up quite a lot. How much did the DS Zelda team talk about the Zelda theory?
“that Zelda sound” plays… (laughs) When I hear that “You’ve solved the puzzle” sound, even though I had to work so hard on it, it makes me want to work on the next one right away. To me, that’s the essence of Zelda.
Aonuma:

I think it’s the same for us, too.

I see. (laughs) When you’re developing it, and you’re working so hard on it, and worrying over it, and you finally find the perfect way to do something, you hear that sound playing in your head.

When things are really tough, and we come up with an answer right at the last minute, and we decide, “Hey, this is pretty good!”, then we all…

…hear that sound in our heads. (laughs)

You know, that “Zelda sound” might have left its mark in gaming history.

It sticks in your head.

We’re actually changing it, little by little, but we can’t change it too much. If we changed it drastically, it would turn into something completely different, so…

No, you absolutely mustn’t change that. (laughs) Not that sound, and not the one that plays

Video: when you’ve opened a treasure chest and gotten something good

By the way, in the Twilight Princess interview of the “Iwata Asks – The Wii Hardware” series of interviews, the words “essence of Zelda” came up quite a lot. How much did the DS Zelda team talk about the Zelda theory?
when you’ve opened a treasure chest and gotten something good .
Aonuma:

You’re right, we really can’t change those. They’re like a venerable restaurant’s secret sauce. (laugh)... And we’ve inherited them.

We’re all careful to protect traditions like those. Nobody’s ever suggested trying to change them. I think everybody understands that those are “Zelda”.

You know, though, it’s funny that the action of making Zelda itself is a lot like solving the puzzles in Zelda.

I thought it was pretty good, if I do say so myself. (laughs)

Did you hear that sound inside your head?