Now I’d like to ask Asuke-san about the Sealed Grounds where that giant boss appears.

Why does a giant boss appear there, and how did Asuke-san approach it?

Asuke-san came in partway through, so I don’t think he knows how we came to make a giant boss.

It started with a request from Aonuma-san. When we make a game like this, I usually only give the staff a theme, concepts, and the minimum rules.

You make the most irrational demands. (laughs)

Yes. (laughs) But Aonuma-san piles on even vaguer tasks.

Like, “A giant enemy attacks one place and you have to do something about it.”

Yes. (laughs) Well, he means to start off brainstorming that way. Fighting against a giant opponent much larger than yourself feels great. As I thought over a number of ideas about what might work together with the staff, it just gradually grew, and that was when Asuke-san joined.

Well, I’ve never been very good at The Legend of Zelda, and it was my first time to make a 3D game, so I felt a lot of pressure.

I thought, however, that his inexperience with 3D games would be useful. Besides, he was director of New Super Mario Bros. Wii, so I thought he would be able to make a 3D game that anyone could easily play. At that point, no one was in charge of it, so I asked Asuke-san to work on the stage with the giant boss.

Asuke-san, at that time, how did Fujibayashi-san lay it out before you?

He said, “There’s a giant boss that tries to force its way to a destination. I want you to come up with a way of holding it back.” 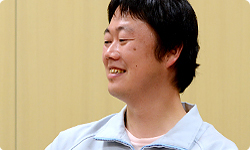 But he said I could freely incorporate my own ideas as long as they were in line with Link’s capabilities this time and made use of everything that had built up to that point. That’s all there was in what he described, but to a planner, there could be nothing more pleasing than freely making whatever you want.

Yes. And while you usually defeat bosses, this time you hold it back.

That’s right. I thought I would make a really spooky, giant boss and make it so that it’s really tense as the boss keeps going and you have to find some way of holding it off.

And the parameters I laid out also touched upon landforms.

Yes, that’s right. The giant boss keeps going and you have to hold it up, so it was necessary to think of a large landform to suit that.

A giant boss appears, so the landforms to serve as the setting needed to be bigger.

Exactly. In line with the size of that giant boss, we could have simply prepared a vast, flat space, but I thought that would be hard to play in. I wanted to make it so Link could cling to that boss when he fought it.

A plain wouldn’t be right for that.

That’s right. I thought of all kinds of landforms, but then one of the landform designers suggested using a spiral shape.

Video: We made a spiral of the large wall that’s part of a landform shaped like a mortar, and the giant boss comes at you from the bottom

Now I’d like to ask Asuke-san about the Sealed Grounds where that giant boss appears.
We made a spiral of the large wall that’s part of a landform shaped like a mortar, and the giant boss comes at you from the bottom . At the end, the boss reaches the top.
Iwata:

It’s a spiral landform, so you can clearly see from the top where the giant beast is climbing. It creeps up, so it’s really tense. Link climbs to the top of this spiral stage, and goes down, and tries to halt the movement of this giant boss.

How does he move up and down?

This time, there’s an item called a Sailcloth - which is like a parachute - that he can use. When you fly down, the Sailcloth opens up.

So even if you jump from a really high place, you don’t suffer any damage when you land.

Correct. Toward the bottom, you can attack the giant boss’s legs, but its legs are all you can see!

Because it’s so big. (laughs)

Yes. It’s gigantic! (laughs) But when you climb up, there are holes here and there blowing air up. If you use those, you can ride your Sailcloth up. Then you get ahead of the boss, jump onto it, and fight.

But when you fight a big monster, camera problems arise. 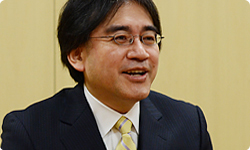 Exactly. Link is small and the boss is insanely huge.

I suppose you had to try a lot before you could reconcile those impressive visuals with ease in fighting.

Yes, that’s right. I thought that making a 3D game that is easy to play was astoundingly hard. It’s what I struggled with the most.

About that time, I caught Asuke-san whispering, “The Legend of Zelda sure is hard...”

That’s true. It really was a struggle. However, the programmer in charge of cameras always carries around a camera or video recorder. Catching all kinds of things on film is his hobby.

He’s a programmer with photographic sense.

Yes. That programmer has been in charge of camerawork for The Legend of Zelda for some time now.

He did some striking camerawork for battles that would make fighting easy and cleared up my problems right away. I was incredibly lucky to work with someone like that. When they fight that boss, I hope players will enjoy that striking camerawork.

When you defeat the last boss in a dungeon, that’s usually the end, right?

The Legend of Zelda has always been that way until now. But the last boss that appears in the Sealed Grounds - the development staff calls him the Big Boss - shows up several times.

So when you talk about holding back the Big Boss, that’s like sealing it.

That’s right. So the Big Boss’s name is The Imprisoned. You can seal it but never totally defeat it. Link confronts that Big Boss several times, but the way you fight changes as the story progresses. But that’s...