When you made the forest that is the first game field, what did you have in mind aside from a fantastical atmosphere and having lots of creatures live there?

I tried to make the landforms more three dimensional than before in the series. I designed it so that the first time you come, you can just follow the roads, but as you explore, you become able to go all sorts of places, and then you can just head straight to where you want to go. You don’t just go once, but come and go many times.

A landform with a single path isn’t optimal for playing many times.

That’s right. With a simple landform, you can’t say, “Maybe I’ll go this way today,” so there are places that are easy to reach and others that aren’t. 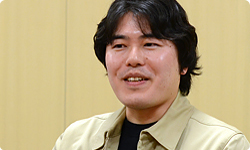 But if you make the landforms of the first game field more three-dimensional, the players might get lost. Ito-san, what did you think when you saw Hiramuki-san’s landforms?

When you actually play the game, the landforms are indeed three-dimensional and complicated. But there’s a feature called Dowsing. If you use that, it will tell you which way you should go next.

Link falls to land and searches for Zelda.

Video: It shows you the general direction you should go

When you made the forest that is the first game field, what did you have in mind aside from a fantastical atmosphere and having lots of creatures live there?
It shows you the general direction you should go .
Iwata:

Did you come up with the concept of Dowsing rather early on?

Yes. When making this game, we had the theme of “exploration and discovery.” The first thing we thought of was something like an L-shaped wire.

Years ago those were used when people went looking for an underground water source or a vein of ore.

That’s called dowsing, and the first thing we thought was that using the Wii Remote Plus to do that would be fun. And when it comes to making The Legend of Zelda, there are several things you have to be careful of. In 3D, it’s easy to get lost. If you’re told to go someplace, along the way you...

You think, “Which way was it again?” (laughs)

Exactly! (laughs) Until now, we’ve prepared landmarks that you could see from afar or we devised something or other to lead the players to avoid anyone getting lost, but with Dowsing, we don’t have to do that. And another method to avoid people getting lost is the Beacon that works like smoke signals.

You mean like setting a tree on fire to send up smoke?

You don’t actually set a tree on fire! (laughs) For example, if you use Dowsing and find out which way to go, it isn’t always so easy to get there.

The landforms are a little three-dimensional, so even if you go straight, a wall or something may block the way.

If you call up the map, you may suspect that there’s something on the other side of that wall, so you point there and a Beacon appears in the game field.

You place your own marker where you want to go.

Yes. We call it a Beacon, but

Video: if you look toward the sky, it’s actually a pillar of blue light

When you made the forest that is the first game field, what did you have in mind aside from a fantastical atmosphere and having lots of creatures live there?
if you look toward the sky, it’s actually a pillar of blue light . You can see it from far away.
Iwata:

That way you can reach your destination without getting lost.

That’s right. By combining the Beacon and Dowsing, it isn’t a Lost Woods, but rather the “Not” Lost Woods.

I see. (laughs) The one who made that blue pillar of light was Ito-san, who worked on effects. With regard to the whole game, what did you pay attention to as you handled the effects?

Unlike before, the visuals this time are like watercolour.

That’s right. It’s a new touch, so I suppose a big challenge was figuring out what kinds of effects would work well with it. 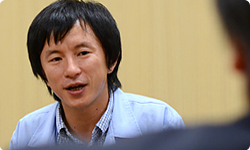 It didn’t all go smoothly from the start?

No. When you took a good look at it, the backgrounds had an atmosphere rather like watercolour, but the characters moving around there were slightly different so as to stand out. At E3 20106, we exhibited rather featureless art for the background and characters that would fit either style, while trying to avoid becoming too realistic. But later I heard from Aonuma-san that someone at NOA (Nintendo of America) had said that the effects were featureless and lacked something. So I hurled myself into fixing them. To make it look better, I would make something and toss it out, make something and toss it out. It would fit in well, but I was aiming for distinctive visuals and tried a variety of manners of expression. What’s more, the sword this time... 6E3 (Electronic Entertainment Expo): A video game trade show usually held once a year in Los Angeles. Attendees of E3 in 2010 were able to experience The Legend of Zelda: Skyward Sword for the first time.

You can swing it any direction you want.

I experimented many times with ways to make which way you had swung the sword clearly visible. As a result, I think it turned out to be really satisfying when you swing the sword.

The effect matches the watercolour atmosphere and makes the sword battles impressive.

Yes. I think the characters and scenery will draw the players’ eyes, but I hope they will pay attention to such aspects of the game as well.