Could you introduce us to some of the new items that appear this time?

One is the flying

Could you introduce us to some of the new items that appear this time?
Beetle in the form of the insect it’s named after.
Iwata:

Could we say it’s a bug robot?

Yes, we call it that. At first, it was a boomerang.

Huh? A boomerang turned into a beetle?

At first, a boomerang would spin through the air, and then keep flying around in the air.

We thought it might be fun if you could tilt the Wii Remote Plus so it flew however you wanted and tried out some things, but then we started talking about how that simply wasn’t much like a boomerang. (laughs)

And the camera will chase it. We wanted to think of an item that would fit better with that feature and came up with rocket fists. (laughs) (Editor’s note: a rocket fist was something commonly seen in giant robot cartoons in the 1970’s. Literally the fist with rockets attached would fly off of the hero robot’s arm to punch and destroy distant evil enemies.)

Yes. (laughs) At that time, it could also grab things, so we thought it would be cool if something like a hand were flying around. 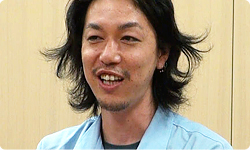 In the end, it turned into a beetle. The way it looks like it flies out from your arm is leftover from the rocket fist.

The Beetle can fly quite some distance from Link, and we thought that might cause some trouble.

It could have a markedly negative effect on gameplay.

Exactly. Players would be able to go to places and see things that they shouldn’t yet. We realised that right away.

The landform staff wouldn’t stop complaining about it. (laughs)

They were livid, but we squeezed it in, and it turned into a very user-friendly item.

But it makes one wonder how a mechanical marvel like a flying beetle would exist in the world of The Legend of Zelda.

But thanks to this mechanical item, we decided to expand on that theme, which gave birth to the ancient civilisation that is part of the backdrop this time.

At first, we weren’t thinking about having an advanced ancient civilisation be part of the milieu. As you can tell from a rocket fist. (laughs) 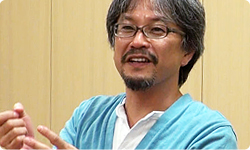 (laughs) So if you hadn’t thought of rocket fists, the game wouldn’t have involved an ancient civilisation?

It may have been quite different.

Ah... Maybe we should make this section’s title “Rocket Fists Give Birth to an Ancient Civilisation.” (laughs)

It is true that we don’t make The Legend of Zelda games based on a story. The process is the exact opposite of thinking up a story at the start, coming up with various settings, and writing a proposal. Of course, both ways are valid.

That’s right. The way we make The Legend of Zelda games is like solving a puzzle, so it’s really enjoyable.

You all like that. Wriggling around and landing. (laughs)

Oh, I see. You struggle and squirm, but pull off a solid landing, which feels really good. (laughs)

That’s true. And the

Could you introduce us to some of the new items that appear this time?
Gust Bellows is a new item making its first appearance in a 3D Legend of Zelda game.
Iwata:

That magic jar you use to blow stuff around, right? How did you come up with that? 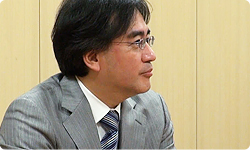 It can do anything. I love it! (laughs)

Yes, the Gust Bellows is one of those things you whip out whenever you’re in trouble.

A game is fun when it has profoundly mysterious things, and also, we figure its best to prepare items for doing all kinds of things from the very start.

The Gust Bellows can blow around all sorts of things, but at first it could also suck things up.

Oh, we did experiment with that.

It was a magic jar that could suck in and blow out.

And you could narrow down the mouth like you might to adjust the flow of water from a hose. And if you twisted the end you could blow things further.

From behind Link’s back, you couldn’t see the mouth, so you’d be thinking, “What’s going on?!” (laughs) 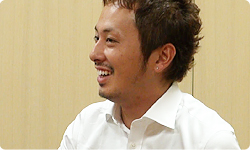 You couldn’t see at all. (laughs) So we made it to only blow and realised that was enough to allow players to do all sorts of things. Then we decided to refine the satisfaction of blowing things around and it turned into a great item.

Could you introduce us to some of the new items that appear this time?
Whip is there, too.
Aonuma:

Oh right, the Whip. Around the time of E3 201011, Iwata-san said the Whip was cool. 11E3 (Electronic Entertainment Expo) 2010: A video game trade show usually held once a year in Los Angeles. Attendees of E3 in 2010 were able to experience The Legend of Zelda: Skyward Sword for the first time.

And that decided it.

Yes. That statement alone set us to polishing it up.

Huh? What I said did that?

Yes. Of course, the Whip also appeared in The Legend of Zelda: Spirit Tracks12, so we have been working on it, but we weren’t sure if we should actually use it. Then, before E3, we had a chance to have you look at a version still under development. We decided to include a whip so you could see it, and your response was amazingly positive. 12The Legend of Zelda: Spirit Tracks: An action-adventure game that was released on Nintendo DS in December 2009.

Well, I was really happy! (laughs)

Until E3, we hadn’t done much with the Whip.

It was a brand spanking new item.

And I snapped it up. (laughs)

We thought, “This’ll work,” and started seriously developing it.

If you swing the Wii Remote Plus, you can use it to haul in items.

And you can do things like snatch keys away from enemies.

Is it all right to reveal that?

Oh, sure. Like Iwata-san said at the beginning, there’s so much packed into this game that it won’t matter.

That certainly is true! (laughs)