Morita-san, you were the one who introduced

Video: cutting the signs with the sword

No, (Shigeru) Miyamoto-san suggested that.

Oh, is that so? So as usual, Miyamoto-san just strolled in, dropped an idea on you, and left?

Yes. He asked, “You can slice through the sign, right?” (laughs)

If you swing the sword at an angle, the sign splits diagonally. Who made it so you can cut the signs different ways like that?

I think I designed that. I thought of it like a little wheel of cheese cut into six pieces.

In addition to cutting it, a piece will float in the pond. Was that you, Morita-san? 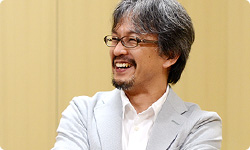 Yes, that was me.

Morita-san is strong when it comes to the waterfront. (laughs)

I laughed when I first saw that. (laughs)

We saw that around midnight. Miyamoto-san whispered, “That’s cool...”

He said, “Now that’s The Legend of Zelda!”

It isn’t much at a glance, but when we put effort into making it float and drift smoothly, Miyamoto-san was really impressed.

I’m happy about that. When I made it so a piece would float in the water, they put a sign at the waterside.

They changed the position of the sign because they wanted people to see a piece of it floating in the water.

It doesn’t have anything to do with the original function of the signs, though. (laughs)

So we made it so that if you go out once or play “Zelda’s Lullaby” on the ocarina, it repairs the sign.

So you also had to add a way to return the sign to normal.

Right. Development was in its final stages, and we were really busy, but we just thought, “It’ll be cool, so let’s do it!” (laughs)

So it was part of Miyanaga’s work and of the others working on the landforms to put a sign by the water and make the Fishing Pond a special landform.

What were you doing before you joined the team for Ocarina of Time?

Right after joining the company, I was working on pixel art, but in the latter half of my second year, I started working on Super Mario 64.

Like Haruhana-san, they called you in to help with the landscape design.

Yes. That was my first encounter with polygons. It was fun to see what I had made come together. I also joined the project team for Mario Kart 648 in the latter half of development and made courses. 8Mario Kart 64: An action-racing game released for the Nintendo 64 system in Japan in December 1996.

After Mario Kart 64 was over, you joined the team for Ocarina of Time.

How did you make the landforms?

I don’t remember exactly, but when I joined the project, the town stage was done. Link was just walking around an empty town. I remember we were talking and started wondering what we could do with the world. 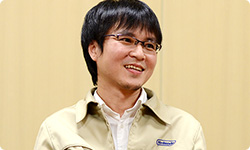 You were still experimenting.

So instead of having a blueprint for the village from the start, everyone threw in ideas, and little-by-little the residents and houses increased in number, and in the end, the village was done.

You were also in charge of

Morita-san, you were the one who introduced cutting the signs with the sword , weren’t you? Why did you do that?
Hyrule Field . The reason you made such a vast world was so Link could gallop around on a horse, right?
Miyanaga:

Right. It created quite a fuss when I first made Hyrule Field. People would say, “You can’t make it that big!” (laughs) Even riding a horse, it was so big that you would get bored riding around it, so we had to add something. Then lots of people took a hand in it, having enemies appear and putting holes here and there.

We went around Hyrule Field looking for places where there wasn’t anything and put something in each one.

We’d think, “This area’s a bit empty, so I’ll make a hole and put something in it.” (laughs)

In other words, you made Hyrule Field as a basis for everyone to build their ideas upon, and that’s how it turned out to be that kind of space.

Right. We made Kakariko Village that way, too.

We’ve never really had a perfect blueprint when making a Zelda game. Basically, there’s a basis and everyone tosses ideas back and forth and puts them all together. 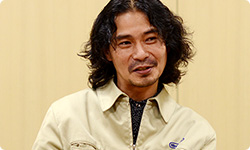 That’s right. Everyone was always talking things over, putting their ideas together, and making things. For example, instead of telling the director to make a decision, we decided things together.

In other words, you weren’t divided into people who gave orders and people who took them.

Right. Regardless of position or career, we said, “I like it this way better,” and naturally shared opinions. That was especially marked toward the end of development.

Towards the end, we were like, “I’ll take care of that.”

Right. If you noticed something, you just went ahead and did something about it.

The release date got pushed back several times.

In general, when a release date gets pushed back and the due date for development is extended, hard days lie ahead, so the atmosphere gets heavy.

But that didn’t happen at all with this project.

Yes. We thought, “Now we can fix that one spot!”

“We can polish that up more!”

“I can put a hole at that one empty spot!”

Usually shouting “We got an extension! Fantastic!” is unimaginable, but on this project, if I said, “Just let that go,” to someone, they would reply, “Why would I do that?” (laughs)

At the time, all we could think was, “That was bothering me, so now I’ve got time to fix it!” We felt very sorry that the fans had to wait even longer when the release got pushed back, but I remember that we ourselves were overjoyed!