5. Song-writing Not Done by the Book

Sakaguchi-san, from your perspective, what aspects of the music in The Last Story were the most challenging to get right?

Well, one of them was the battle music, which is split into several different sections, with the music changing depending on what’s occurring in the battle.

And that’s something that you were able to achieve because Uematsu-san had put so many different elements into that battle theme, which stretched over a full five minutes.

That’s right. If you listen to that five-minute battle music, you’ll be able to tell which parts are used in each specific battle situation. I think that if we’d just joined two pieces of music that were written separately, they wouldn’t have fit together smoothly. But because the music was originally written as a single piece, it all feels very natural, even if it’s split up and used according to the situation. That’s why, even with all the changes in the battle music, it all feels quite seamless.

As the music wasn’t written separately, even if you cut it up and put it back together, it will still be fine.

That’s right. But having said that, we really sliced the battle music up, to the extent that I wondered whether it was alright to be splitting it into so many separate sections.

There is a single refrain that is part of the battle music which we occasionally used during event scenes. It actually works surprisingly well.

It would be great to hear all those songs which are heard separately over the course of the game all played together by a full orchestra at the very start of the game. Wouldn’t you agree? (laughs)

Ah, that’s something I’d love to do. But maybe that’s a discussion for another day… (laughs)

Thinking about it that way, there are more than enough elements to the battle music to be performed as a full symphony. We made the most of its sheer volume and wove that music into the game. In my mind, the key concept of a real-time game is that anything that happens must take place in a seamless fashion. This was true not only of the battle scenes, but also of the events leading into the battles. We were always conscious of these key concepts, and indeed I think that the whole game fits together with a certain seamless quality. 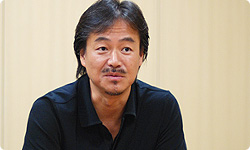 The idea was that it would be different from the way you’d expect the structure of an RPG to be. Your plan was to have the sound in the game creating a coherent whole, wasn’t it?

That’s right. This is why we actually tried to steer clear of using little fanfares, flourishes or jingles in the music in this game.

And how did you feel, Uematsu-san, when you actually came to play the game you’d created the music for?

For this title, I put aside the rulebook, and the pattern of having an intro, a verse and a chorus which would then be looped. Some of the music does not build into any kind of great crescendo, but for these pieces, my priority was to create a certain atmosphere. Those pieces actually work surprisingly well in the castle, for instance. When I played the game, it reaffirmed to me that the music had not been written according to the existing rules. The music isn’t there to help explain or underline what’s happening on screen. Rather, it exists as another kind of sound effect. There is a unity between the persuasiveness of the images and the power of the music, and I think they fit together in a very natural way.

So it functions as a kind of ambient music.

Yes, there is certainly music in the game that fulfils that role. It’s actually really impressive to me how the music has been integrated into the game in this way. It made me realise afresh that music can perform this sort of function.

So was attempting a new challenge with regard to the music something that you found rewarding?

Yes, it was. But as this was the first time I had attempted something like this, sheer chance played a major role. I feel that there is still a lot of room to explore this way of making music. 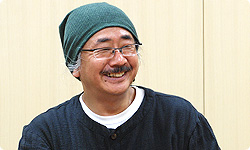 A lot of this kind of ambient sound11, which includes the sound effects, has been worked into the game. Then you have the music for the castles, which is mixed in with this. In the town, you’ll overhear snatches of people’s conversation as you pass them in the street, or hear the sound of the wind as you cross a bridge, so the background noise and the music are tightly woven together. I think this really serves to bring the game world alive. 11 Ambient sound enhances the atmosphere of the game world, and includes the sound of water, insects, or crowds.

As the composer of the music, how do feel about the way it ultimately gets used within the games you work on?

That’s an interesting one… Well, I put my heart and soul into creating this music, so of course I want people to recognise and remember it, but at the same time, it would feel unnatural if there was a melody at a point where it was uncalled for. In the era of the Famicom, when there was blocky animation and only three channels to work with for the audio, melody was the only way to add drama to the proceedings. If the melody was emotional, then that would give the scene drama. In the old days, you had no choice but to make use of melody.

That was the only way to touch people emotionally back then.

That’s right. But now, the graphics in games are very powerful, there are spoken lines, and there is a lot of ambient background noise. If you try to force a melody into a situation where it’s not called for, it is liable to clash with these other elements. It’s better to leave space by simply playing an ambient chord for a whole note, or semibreve.

So that means playing the same notes for quite an extended period of time. In this game, there are scenes where the music really comes to the fore, and then there are other scenes where it blends into the background. There’s a huge degree of variation of the music you’ve created to fit each individual scene.

In this game, there’s more variation than in your past work on other games.

Yes, it was something I always had to be conscious of.

Take the violin music in the flashback scenes, for instance. It comes after a piece of ambient music, and really jumps out at you.

People respond to things in a relative, contextual way, so when there is variation between pieces, it increases the impact. 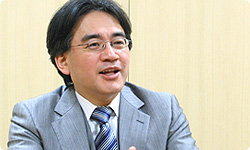 I really love the music in the flashback scenes. There’s something different about the nuances of that piece, compared to the other music.

I think that’s because we used a live recording of a violin.

Ah, that must be it…

It’s very poignant, and has real power, doesn’t it? The chords in the background are played on a synthesiser, with just the melody performed by a violinist. Having a human being playing really makes it stand out.