3. A Prototype With Moving Blocks

How long did it take you to come up with the plot for The Last Story?

We got the ball rolling when I went for a meal with Fujisaka-san and a programmer from the dev team. We had a fairly heated discussion of the differences in philosophy and style between Japanese and Western RPGs and the images shown in promotional videos. We were saying: ‘It should be like that… It shouldn’t be like that…’ And out of this discussion emerged a vision of what the plot should be like.

So you didn’t come up with it all by yourself, rather the plot steadily took shape over the course of discussions between the three of you as you determined the approach you’d take towards The Last Story.

That’s right. In fact, we spent an extremely long time tinkering with the prototype7 during the initial stages. 7 The prototype is used during the development process to experiment with game features and functionality.

It kept on changing, didn’t it?

We spent about a year and a half tinkering with it.

Was this the first time you had gone about making a game in this way?

No, I used the same method with FF VII8 and spent about a year on it. But this time it took longer. 8 Final Fantasy VII was an RPG released for the Sony PlayStation in January 1997 in Japan. 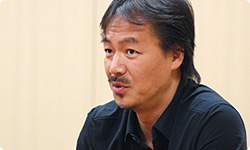 In the initial prototype, the characters were just these square blocks milling about on screen.

That may well be very different from how people imagine you go about creating a game. Your completed games are so graphically rich, that you’d be forgiven for thinking that they were like this right from the start. But then when you’re thinking about the fundamentals of how the game is going to function, there’s no need for beautiful graphics.

That’s right. You start off by actually getting things to move around, and that leads on to the next step.

If you don’t actually give it a go, you won’t know how it feels to play. But a year and a half is still a very long time. Did you find that period tough going?

It could be tough going at times, but those were outweighed by the fun parts. One of the things we came up with back then was the Test Dungeon, which is still on the game program used for final production. It’s a perfectly square, really dull, featureless room, but when we were working on improving the system, we’d go to that room and everyone would play.

It’s simple, which means you’re not going to get distracted by the richly-detailed surroundings.

Right. That dungeon was a big help right from the early stages as it allowed us to gauge how much progress we had made, which meant playing that section really served to spur us on.

Hearing you talk about all of the time and effort you put into coming up with the structure of the game really brings me back to what you said earlier about getting away from your old formula. It must have taken a great deal of trial and error to come up with the final structure for the game. 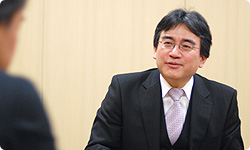 In terms of the game system, we must have rejected ten times the amount of ideas that we chose to use in the final game. I think you could probably make another couple of games just using the material we threw away. (laughs)

How would you describe the game system you finally settled on for The Last Story?

This may be a rather highfalutin way of putting it, but I would say it’s all about ‘order’ and ‘chaos’. In battle, the side that manages to impose ‘order’ on the battlefield will secure victory. Or to put it the other way round, disrupting the ‘order’ of your enemy so it degenerates into ‘chaos’ is the key to victory. That’s something I wanted to express in the battle scenes in the game. But I didn’t want this to be achieved in a logical, methodical manner like Japanese chess. I was looking for a more intuitive battle system in which you can feel the flow of time.

With the battles being fought in real time, you get an intuitive feel of ‘chaos’ for your opponent while preserving your own ‘order‘. This means you need to be always adjusting your strategy in a constantly-changing battle situation.

Right. It isn’t simply a question of you fending for yourself in the midst of the action. Cast a glance over the battlefield and you’ll see that tactics that entail ‘order’ and ‘chaos’ are in evidence all around you. That’s the system I was aiming for, one that is realistic and vivid.

How did you see this period of trial and error, Fujisaka-san?

Well, it’s rare for anyone to spend a year and a half on this. There was that UFO at the beginning, for a start.

(laughs) Yes there was!

…There was a UFO in that world?

A UFO would appear at the spot where enemies appear, or rather there was a kind of floating disc.

That worked out better than expected! (laughs)

It was fun, wasn’t it? Well, it ended up being discarded, but the system kept going through all kinds of modifications, so I had to keep coming up with images to fit those changes. It left me with the impression that Sakaguchi-san likes to get the game system elements in place first and foremost. 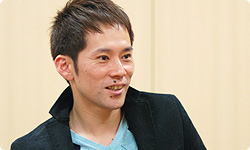 Is that something you did consciously, Sakaguchi-san?

Yes, it was. Of course, the story is very important, but if the storyline becomes priority, the advantages of using the new gameplay won’t function very well, as I’m the kind of person who is perhaps satisfied to simply have impressive, well-directed cut scenes. That was my concern.

What you wanted was to make the actual gameplay enjoyable.

That’s right. I believe that a story’s real drama comes out during battles.

Take, for example, a scene where you’re protecting someone. If that appeared as a part of the background story, you might be able to feel emotionally engaged to some degree. But by having that actually take place during a battle, I think the player will feel a greater bond with their ally. That’s why, for this title, the system side was not designed to fit with the images. Rather, we made the system first, and then added the dramatic story sequences to fit with that system.

How do you feel about the gameplay when you play it now?

Well, I do feel that what I set out to achieve, at least to some extent... I mean, of course it isn’t perfect, but...

When I actually saw it, I felt that this was unlike any game I’d seen before. I was particularly taken aback by the fact that there would be a story scene, but the camera would not automatically focus on it.

To be honest, I was extremely surprised. Normally programmers and graphic artists go to great lengths to create those story scenes.

Yes, they do, don’t they? (laughs) But I felt that by taking this approach, it added to the richness of the gameworld. Simply because it’s a story scene, we didn’t want the camera to automatically point in that direction. In this world, what the player is actually looking at is everything. When you think that something might be happening when you aren’t looking, it’s actually quite exciting, isn’t it?

It is rather exciting! (laughs) And this is another way I felt that the approach you took is a really innovative one.

Thank you very much. The approach we took was the result of a process of trial and error, so it may not be perfect, but the unique feel it has to it, as well as its freshness, is really important from the perspective of entertainment value. Even if it has some rough and ready aspects, I believe the player will be really excited by the results.