1. As If It Were the Last In the Series

Can you tell me about the things that first came to mind when you thought about developing a new Smash Bros. game?

I felt that a large premise of the project was that this was not a series that would continue indefinitely. After all, it wasn’t possible to keep on increasing the number of characters that are entitled to take the field in Smash Bros. And even if you try to utilise new familiar characters that resonate with the fans, you can’t get each and every gamer to be happy. Just like its predecessor then, we decided to design the game as if it were the last one in the series.

At any rate, considering all our available options, what would the optimal game look like? If this was our last chance to mobilise all our forces, what features would be most appealing to our gamers? What would make our customers happy? This line of thinking was the main key to development.

What did you think of the fact that the platform to be used was Wii?

Well, first of all, when I heard about the Revolution, or Wii concept at the E3 in 2005, I had this feeling that games with features that anyone can master, like Wii Sports, would become the new main attraction. Of course I thought there would be more conventional games too, but I thought that easily enjoyable games would become the next big thing.

Making games that broke with convention was the key concept for the Revolution.

Right. I thought this direction was pretty spectacular and heartily applauded the flexible approach you were proposing. At the same time, however, I didn’t think that Smash Bros. had to fully adhere to this approach. Rather, I thought that I should remain aware of this new concept Nintendo had developed, but then think about what development path was right for the new Smash Bros. 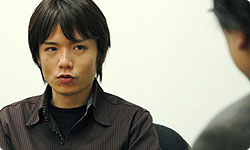 Of course, I think there was a possibility of taking Smash Bros. in a more casual-gaming direction. For example, we could make the art style simpler or make it possible to use Mii characters. However, with the various titles that Wii was to offer, I felt that people were looking for something different. That’s the reason I decided in very early stages of development that the Wii pointer and motion movements would not be a primary feature of the game.

The Nunchuk controller can be used to play the retail version of Smash Bros. Brawl, but it’s not highlighted as the main controller.

That’s right. Ultimately, the game supports Wii Remote, the Classic Controller, the Nunchuk and the GameCube controller, and having support for these four controllers was something that we set from the start of the planning stages. However, the purpose of designing Smash Bros. Brawl was not Wii-like play that utilises the pointer. If we had decided to adhere to the new approach offered by Wii, I think it would have been possible to design the game with more unconventional controls. However, in the end, I set aside several ideas as I thought it was important to dedicate our resources to developing what our gamers were looking for.

In regards to whether or not Smash Bros. Brawl was moving in the same direction as Wii, I decided purposefully not to worry about this question and told myself that this would be the role of Smash Bros. Brawl in regards to Wii. This is a decision that I made very clear in the first project planning report. (Show document)

Even though I was responsible for Wii and setting this new direction, I thought the worst thing we could do is keep proposing the same games. Stated simply, I think it’s important to have variety. Back in the days that we worked at HAL Laboratory we used to say that we won’t stand a chance if we do what Miyamoto-san might do, so let’s do something he wouldn’t, right? 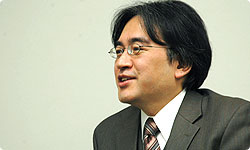 I think you can see the roots of my ideology flourishing at Nintendo today and I’ll be very happy if this way of thinking continues to expand the range of products that Nintendo offers.

It’s best to have both approaches, right? If I had been at Nintendo, I may have made a Smash Bros. Brawl that was more in line with Wii. As a result, I feel, in some ways, that my decision-making wasn’t the wisest, particularly as gamers readily tire of games these days. Smash Bros. Brawl may not be effective as it tries to perfect the experience of conventional games.

Without a doubt, the rapid speed at which consumers make purchases and then grow tired of them is an area of game development in which the balance has been thoroughly upset. Some time ago we were able to say “if we invest this much effort to make this type of product, gamers should get this much fun play time out of it.” Now, however, these odds are changing and there is a feeling that the product won’t hold the gamer's attention unless you continually design more game contents and add more depth.

That’s why I think games like Wii Sports and Wii Fit were a step in the right direction. I’m not saying that these games lack depth, but these games proposed an unprecedented line of thinking and broke from the old “more contents and more depth” philosophy.

Right, but that absolutely doesn’t mean that we did this because we thought development would be easy. An astounding amount of effort was actually put into the fundamental development process of these titles. We’re investing our efforts in other areas besides graphics and data capacity. However, as I mentioned earlier, if all our games mirror games like Wii Sports or Wii Fit, our gamers would soon grow bored. It’s truly a division of duties.