3. The “Essence of Mario” Put Into Words

I think that this was a very difficult project for you because of the way in which you participated. You weren’t the director like in Mario 64, and even though you know the staff at EAD Tokyo very well, they were about 400 kilometres (about 250 miles) away from Kyoto.

Still, it ended up being relatively pleasant work. I don’t think we would have been able to make this game if I was the director, placed right in the development process, but it was possible because I was the producer this time. The development environment had also improved greatly; the computer on my desk was always connected to Tokyo.

I heard that you were e-mailing them even at times like in the morning on days off! (laughs)

They were constantly sending me the latest data, so I was always able to respond to them immediately. At first, when I went to Tokyo, I’d take over an entire room and have the development leads come in one by one, and we would talk about the game while playing it. But then I realised, “Do I really have to go all the way to Tokyo just to do this?” (laughs) So I had the same environment created in one of the conference rooms in Kyoto, where I held meetings displaying the game screen using a camera and talked about how we should change things in the game via video conferencing. So, I was able to work as if I were actually in the Tokyo office most of the time.

Koizumi-san, the director, referred to having you be the first to sample the “dish” they had created.

It was a strange atmosphere. I was very embarrassed having everyone stare at me while I played! (laughs) Mario’s the kind of game where you can trip up easily if you don’t pay attention. But if I were to make a mistake while everyone was watching, there’s no way that I could tell them, “Sorry, I wasn’t paying attention!” (laughs) 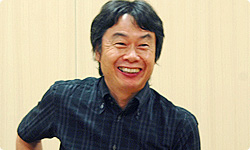 I was worried they’d say things like “Miyamoto talks big, but he’s pretty awful at the game.” or “I don’t want someone with no skill like that telling me how to make games.” It felt like I was playing on a bed of nails! (laughs) Anyway, I tried all the different stages in front of everyone while making comments like “The way you get beaten so easily here isn’t right,” and asked the staff to schematise the sort of things I can and cannot accept.

You wanted to define the “Essence of Mario”.

That’s right. I wrote these things in an e-mail and sent it to everyone involved, even if it wasn’t their responsibility.

That’s an interesting way to do things.

I decided to take those fundamental elements that were created then and make the game by applying them to various areas. For example, in 2D Mario games, it was taken for granted that Mario would run to the right, but in one out of the ten times that you go left, you’d find a little prize. Everybody usually thought that they had to go right, so we wanted to reward the people who turned back a bit. So we tried thinking about these fundamental elements in not just one but every stage in the game, but as the game would lose balance if everyone did that, I used e-mail to preserve co-operation among the staff.

I remember how during development, you said quite happily that you’d put the “Essence of Mario” into words for the first time. 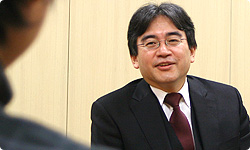 (with a very relieved expression) It was really the first time.

Since you’ve been making Mario games for over 25 years, I almost wanted to ask you “Is this really the first time?!” (laughs)

Until now, whatever I was deciding on, I’d say “It’s instinct,” so I’m actually almost surprised myself! (laughs) For example, everyone thinks of a cute, cuddly character when they’re asked to think of a character from Mario.

The kind of cute characters that seem like they would live in the Mario world.

Because people believe that the characters should be that way, they make assumptions on their own, like how the eyes should be always big and bright. But I don’t really draw my characters like that. So, when new staff who have preconceived ideas like that come up and show me some sketches saying “Look, I made a Mario-style design”, they end up looking nothing like Mario designs at all to me. Lately, all the artists’ techniques have improved compared to the past, but their styles seem to be becoming more and more uniform. They’ve already got this mental template of a well-drawn picture, and it’s sinking into their designs more and more.

They have technique, but they lack character.

I think it’s perfectly OK for Mario to be drawn in a cool way, and by that I don’t mean drawing him specifically to be cool, but that the overall design treatment turns out looking cool. So in the past, I’ve always tried to not design anything that looks childish, and change the design depending on the game, but all this has never been put in words. And as I was thinking of the best way to explain to people to get them to understand, I remembered an experience I once had when I was working on Mario Bros. (Gunpei) Yokoi-san9 asked me, “What’s something that wouldn’t be able to move if I hit it from underneath?”, and I replied, “A turtle, of course.” From that point on, we had a continuous flow of ideas, like “I think it would seem more natural if you’re able to step on the turtle,” and “Wouldn’t it be better if it came out of the shell when you stepped on it?” This topic might get a bit long, but... 9 Gunpei Yokoi is the late Development Manager of Nintendo who headed the team which created the Game & Watch, and the Game Boy. 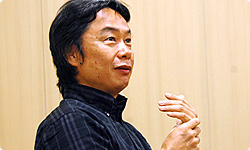 In the end, you were only able to knock over the turtle from the bottom and couldn’t step on them… In Mario Bros., when a turtle gets knocked over, it’ll start moving again after a short period of time. The thing is it’s hard to tell exactly how long it’s going to take to start moving. You can see it twitching, but you’re not able to tell after how many of those twitches it would get back on its feet. So, we decided to change this and make a rule that you could see this timing visually. We made it so that after you step on a turtle, it would pop right out of its shell, and the turtle would start moving again when it gets back inside the shell. The little turtle that popped out of its shell works as the timer, and we felt that this would be something that anybody would be able to see.

I don’t think anyone else could have come up with something quite like having the turtle pop out of its shell! (laughs)

But then I noticed I’d made a huge oversight in that turtles’ shells are an evolved part of their skeletal structure, meaning that we weren’t being entirely truthful to the children…

Indeed, turtle shells do not come off! (laughs)

Later, in Super Mario, the player could step on the turtles. But since Mario was now able to step on them without worry, we decided to introduce some that he wouldn’t be able to step on. We decided that the easiest way to tell them apart would be to place spikes on their shells…

It was our designer, Motokura-san, who said, “When in doubt, use spikes!” (laughs)

Well, it looks like they’ve been listening to what I say! (laughs) If you look at the Boos for example, and their

I think that this was a very difficult project for you because of the way in which you participated.
peek-a-boo reaction when you turn the other way, you’ll see that they’re very shy, and they blush too. I think it’s aspects like these that point out the importance of designing things with functions that can be easily understood. I mean, if a designer was simply told to “make something unique”, how would they know how to proceed? This time around, the fundamental element of Mario is to create form around function, so we should just keep creating as many unique ideas as possible using this. I’m sure you’ll agree it’s quite a straightforward method. 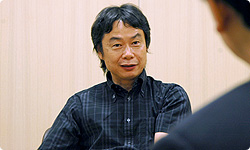 Indeed. Now that you’ve explained it to me, I can finally say I understand how the design expresses the function.

Actually, it’s the same for me too; it all made sense after I put it into words. You see, the fundamentals of the DS and Wii are the same.

When we took pictures of the DS, I felt it was essential to have the stylus appear alongside it in those pictures. We wanted to ensure that people looking at it for the first time would be able to understand how it works.

And that also explains why pictures of the Wii Remote always include a hand holding it.

I made it very clear that I did not want the Wii Remote to be pictured on its own. Having said that, it was only about a year ago that I finally realised my designs had been representing their functions. It took a really long time to arrive at that point! (laughs) In fact, it may not even have been a year ago! (laughs)

It’s been 26 years since Mario made his debut appearance in the first Donkey Kong game!10 (laughs) And finally, after all this time, the “Essence of Mario” has been put into words at last. 10 Donkey Kong, an arcade video game that was released in 1981, represented Miyamoto’s first title as a game designer.