When you presented Super Mario 64 to the world eleven years ago, it felt like the dawn of a new era and was celebrated by people across the globe – but at the same time, the game had created a group of people who felt disinclined towards 3D action games. On the other hand, there were also people whose expectations towards new Mario games had grown higher and who wanted us to create another incredible game that would surprise the world. Amidst all that, Super Mario Galaxy will be the next long-awaited Mario 3D action game; please tell me how you were able to meet this challenge, and what kind of things you thought about as you did so. 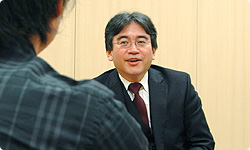 The reason that people felt disinclined towards 3D action games was because those games made it easy for some people to get lost or get motion sickness. Having a background in industrial design, I was used to working with CAD3, and since drawing in 3D was my original job I couldn’t grasp how somebody playing a 3D game for the first time would feel from a calm, objective perspective. 3 CAD (Computer Aided Design): A method of using computers for product design, architecture and the like.

You’re very used to visualising 3D space like that.

That’s because I’ve been doing it for so long... It’s why I’ve made a point of looking at how the average person feels or responds to 3D, but it really is difficult since these things aren’t something I can estimate myself. From another point of view, though, I really enjoyed making Mario 64. When I was a child, I played with puppets, I started drawing manga comics in my student years and when I started working, I began making video games… When I started making games, I was really looking forward to getting to do animation. So when what was originally 2D could finally be made 3D, I was happy just being able to look at Mario from various angles. 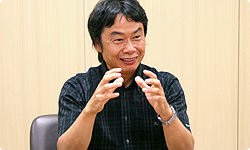 Before you worked on Mario 64, you created Starwing4 with the limited abilities of the SNES while making use of the Super FX5 chip, so in retrospect, you must have felt freed from those old limitations. There were many things piled up that you wanted to do using 3D, and it seems like all that energy really came out in force in the development of Mario 64. 4 Starwing is a 3D shooting game for the SNES that was released in 1993. 5 The Super FX chip was installed in some SNES cartridges. This chip made displaying 3D graphics possible.

The great thing about Mario 64 was how you were able to freely move Mario around, who was now in 3D for the first time. This is quite an extreme view, but I actually felt at one point that this didn’t really have to be a game.

You felt that moving Mario around was fun in itself.

Right. There was no other game before Mario 64 where you could truly move around freely in a 3D environment, so it was fun just moving Mario around and finding stars. But these days, simply having the game be in 3D isn’t interesting anymore. So in making Super Mario Galaxy, I thought about what made the Mario world distinctive amongst 3D games. This is different from things like the storyline.

So, what I came up with was gravity. In old movies, for example, they used all sorts of effects like people walking upside-down on the ceiling. Of course, no one can actually do things like that, so I thought that by creating this opportunity for the players, they can experience something strange and have fun just playing around like that. But when I told that to the staff, they became worried and asked me “Can we really call something like that a game?” So I told them that it’d be better to make something that everyone could enjoy that wasn’t a game rather than make something that was a game but wasn’t much fun. (laughs) 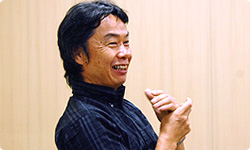 So if it’s fun at the very core, the rest somehow works itself out. On the other hand, if you make a game that isn’t fun, it wouldn’t come together unless you added a lot of elements to it later to make up for it.

I have an image in my mind of Mario as a dapper man doing all sorts of strange things for us like a Vaudevillian6 in the olden days. It was when I was thinking about how Mario was no ordinary man and how I wanted to make him cooler that the name “Super Mario Galaxy” came up, so I thought the combination of spherical fields, gravity and galaxies was a perfect match for him. But the staff objected to the idea. 6 Vaudevillians were entertainers who appeared in variety performances known as vaudeville.

They also said “I thought Mario was a fantasy game, is Mario going sci-fi now?” (laughs) 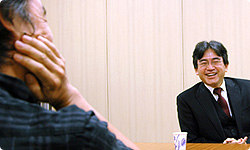 So after having Mario race through land, sea and sky stages, space was the next step beyond. But they didn’t think that space really fit into the Mario world.

That’s why I think Super Mario Galaxy was a good opportunity to re-think what a fun 3D action game is to the players.

The planning of the project didn’t progress smoothly, did it? I heard it took a while for the concept of spherical fields to resonate with the staff.

I felt that in this new Mario world, it wouldn’t be fun if the screen just scrolled as usual – since it was 3D now, I wanted to step things up. When we worked on Paper Mario7 in the past, we experimented with making fields in the shape of rolls or spheres, but they didn’t work as I was expecting them to at the time, so I had put a hold on those ideas. I packed these ideas into the Mario 128 experiment to exhibit them, and it worked really well. It was even on a spherical field, so the camera would follow Mario wherever he went. As the players didn’t have to change the camera angle, we felt that this could be used as a method to reduce the possibility of motion sickness. After all, when the camera angle is fixed by the game designer and moves in a way that’s not expected by the player... 7 Paper Mario was an action RPG that was released on the Nintendo 64 in Europe in October 2001.

Because the camera angle moves in unexpected ways, it makes it easier to get motion sickness.

That’s where it became simply a question of finding the right idea. From a design perspective, spherical fields let you create new styles, and this type of field is brilliant for camera angles too. So even after the Mario 128 experiment, I wanted to save it for another time. 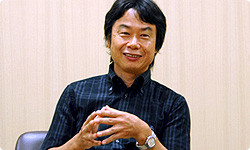 I remember very well how you said you wanted to make the next Mario with spherical fields. But at the time, I did not fully understand its benefits. I knew right away that visually, it would look great. But I didn’t realise at all that its true value actually lay deep within.

Since I wanted to be the first one to make it a reality, I was happy that nobody had realised those things yet. (laughs) Still, as I didn’t want that idea to be used somewhere else first, I tried to use it in Doshin the Giant8. When I told that to the staff, they said “What?! It’s too late now!” and I missed my chance then! (laughs) 8 Doshin the Giant was a game that was released on the GameCube in Europe in September 2002.

So that’s how it was! (laughs)

That’s how long ago I wanted to try using that idea. The spherical field concept challenged the abilities of the programmers who would make it a reality, but at the same time I think it was an interesting debate for the people involved as well. As I’m the kind of person who thinks new challenges make for more interesting work than repeating the same thing over and over again by routine, I felt that this was something that we definitely had to do. Sometimes while we were working on it I told the staff things like “You can do anything with this idea!” and “If you make the sphere infinitely large, you can make flat courses just like before - you can make anything!” (laughs) So, as the game began to take shape, everyone started to feel that we were on to something.