3. From Uncertainty to Conviction

During the two-and-half years or so that all of you were making Super Mario Galaxy, the video game industry changed dramatically. The Nintendo DS was released in 2004, and in 2005, the Touch Generations series spawned a series of hit titles, expanding the definition of what a video game is. And the year after that, Wii was released, and I think all of you were working hard on the task in hand amidst the radical changes going on around you. During that time, what was on your minds?

To be honest, I felt a strong sense of isolation when I heard that the headquarters in Kyoto was full of energy because of the smash hit of the DS. I felt left out. Of course, being in the Tokyo office worked to our advantage as we were able to focus on our work, but at the same time it felt like we were doing something different from the main part of Nintendo.

So you were concerned that what you were doing might be going against the general flow?

It felt like the world was moving towards more casual games. During that time, I felt like nobody would play what we were working on, a game that is geared more towards the core audience.

And how were these concerns you had put to rest?

Last year at the E33 event which was held in the US and the Nintendo World 20064, when I saw the sheer numbers of the demo TV sets that were set up just for Super Mario Galaxy, I thought "we weren't forgotten after all!" 3 E3 is a video game convention held annually in Los Angeles. 4 Nintendo World 2006 was a hands-on Wii event held in 3 locations in Japan in 2006 before the Wii launch. 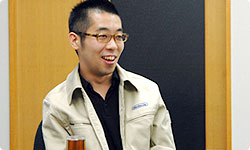 There is no way that we would forget about you! (laughs)

I believe you now! (laughs) I had worked on making the stage data for the version that we showed at E3, and I was very worried at the time about whether people who are not used to 3D games would be able to play the game well. For these people it’s hard to walk around straight in these games, and I was worried whether they would be able to walk on a spherical field, which would be something completely new to them. Watching these people play, I made sure to eliminate those elements they were having a hard time with. But even then, I wasn’t able to completely get rid of that feeling of uncertainty.

But the customers didn't forget about you either! (laughs)

Right! (laughs) Looking at the long lines at Nintendo World, I was very happy to know that there were so many people who still wanted to play a game like Mario. On top of that, very small children, some of them about 5 years old, were having so much fun playing. I saw some of the younger elementary school kids beating a boss, and when I saw that, I felt a firm sense of conviction: "This will really work!"

So up to that point, you felt like you were stranded on a deserted island, and then at the Nintendo World event, you saw that the land continued and that actually the island had become a peninsula. Now, Shirai-san has spoken about how his uncertainties turned to conviction, but how about the rest of you?

Up to the very last minute of last year's E3, I was working all night on the E3 demo, so by the time I had to get on the plane, lack of sleep had taken its toll and I was shattered. I was so exhausted that when I checked in at the airport, I actually forgot to check my luggage! (laughs) 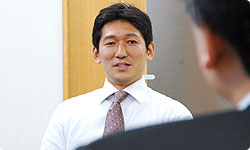 So I finally arrived at where the E3 was being held in the US, and when I saw a huge number of people lining up for Super Mario Galaxy, my fatigue just vanished.

At E3, Super Mario Galaxy was very well received. Everyone looked like they were having so much fun playing.

In the E3 hall, Super Mario Galaxy was set up towards the back of the Nintendo booth. So I figured it would be hard to get the attendees excited about the game, because by the time the attendees had got to the Super Mario Galaxy demo, they would already have played games like Wii Sports, which was set up along the way. But it turns out that a surprising number of the attendees enjoyed the experience, and that was the time I felt a firm sense that the game would work. There are a lot of new ideas built into this game, and even though we personally felt confident about them, you are always going to feel uncertain to some extent until you see the attendees play it.

For me, back when we were experimenting with the Wii Remote, to be honest, I doubted whether you could make a game using it.

As a developer, the thought must have crossed your mind as to whether a Mario 3D action game would be possible with a Wii Remote that was to be held in one hand. The Wii Remote brings you to a whole new realm where you're not able to utilise your knowledge you had built up in previous Mario games.

But after Wii was launched and I saw how well it was being received by the public, I felt that the direction of Wii wasn't mistaken after all.

So you didn't believe in Wii until it was released! (laughs)But there were many people out there who felt the same way, and I do believe that it's important as a developer to have the same point of view as the public. 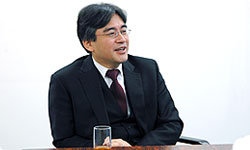 Also, another big factor that turned my uncertainty into conviction was the addition of the Co-Star mode. Among the staff members, there were times when we forgot about work, saying things like "I didn't know Co-Star mode could be so much fun!" (laughs)

Right next to where I was sitting, the staff would get together to play the Co-Star mode. They were having so much fun right next to me while I was busy with my own work, and it made me jealous! (laughs) On top of that, I was able to hear them happily talking, saying things like: "Do something with that enemy on the upper left!", and "Which way should I go?" Being able to have so much fun like that with two people was a quality that hasn’t been seen in a Mario game for some time. That felt very refreshing, and I think it has great possibilities.

In the first Super Mario Bros., when you played with two people, you would take turns. If one loses a Mario, the other person would be next, saying "It's my turn". With the Co-Star mode in Super Mario Galaxy, I think people will swap, taking turns in the assisting role, saying "Now I'll help you".

Also, I would like to see boyfriends helping their girlfriends out, who may not be that good at playing video games. I think that would be a lot of fun.

It would be great if people who had only played games like Brain Training, would say "I want to control Mario" if they had somebody that was good at video games to help them out.

Right. I definitely would like people to try it!