2. Of Course, The Way It Feels Is Key

Did you add a black outline to Mario in an effort to create a design more fitting to the Super Famicom?

Yes. We wanted the graphics to match Super Mario World, which had come out just before this, so we especially enriched Super Mario Bros. and The Lost Levels. But the original pixel-art Mario had a particular charm, so the new one might not suit everyone’s tastes.

Yes, the original pixel Mario is also used in the logo for Super Mario’s 25th anniversary. It certainly does make a distinct impression. But when you really filled in the background for the Super Famicom version, if you hadn’t added black outlines, the objects would have blended into it.

That’s right. And if we had just used them the way they were, people would probably have said, “Hey, nothing has changed!”

It was necessary to make people think, “Ah, the Super Famicom makes it look amazing!”

I actually didn’t join the project until partway through. When I did, the really fancy Mario with the richer shading from Super Mario World for the Super Famicom was already moving around in the level for the original Super Mario Bros. I remember it made quite an impression on me to see that magnificent Mario jumping and running around.

So then you had to redraw the backgrounds to suit that fancy Mario with rich shading.

Yes. I was told I could make it really gorgeous.

As a designer making the game, I felt like I wanted to use them all!

I think the backgrounds also made an impression similar to those in Super Mario World. We made cut scenes from scratch, like having Peach kiss Mario at the very last ending. 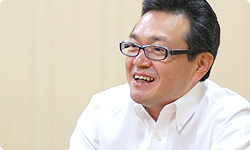 We changed that, too, for Super Mario All-Stars.

I just remembered something. If memory serves, when Mario is underground in Super Mario Bros. 2, there’s a key, and if he takes it, a small iron mask attacks. I think the original background for the Famicom version was pitch black. I thought it was missing something, so I drew a large mask, like the little one attacking, in the background.

(looking at the back of the box of the Super Famicom version) Is that...this?

So I drew the background, but I thought that alone wouldn’t be interesting enough, so I hesitantly asked my boss at the time if I could have

Video: the mask’s eyes flash and have it make a humming sound when Mario took the key

Did you add a black outline to Mario in an effort to create a design more fitting to the Super Famicom?
the mask’s eyes flash and have it make a humming sound when Mario took the key , and he said I could.
Iwata:

So even though it was only your third year at the company, your idea found acceptance.

Yeah, so I was really happy.

We did a fair amount of reworking the backgrounds like that. We changed things,

Video: like hanging a portrait of Bowser in his castle, and including a big picture of Mario’s head in the bonus level

Did you add a black outline to Mario in an effort to create a design more fitting to the Super Famicom?
like hanging a portrait of Bowser in his castle, and including a big picture of Mario’s head in the bonus level .
Iwata:

While you beefed up the graphics for the Super Famicom, there must have also been things that you didn’t change.

For example, when Mario jumps, we could have used a wider variety of action patterns compared to the Famicom, but if we had, the game would have controlled differently, so we decided not to. 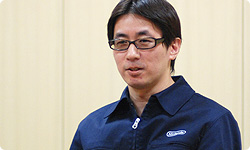 If you had made use of the Super Famicom’s functions, you could have increased the number of object patterns, and if you’d wanted, you could have made the movement a lot smoother. For example, when Mario turns from left to right, there weren’t many patterns with the Famicom, so he turned in a single instant, but if you had made him turn slowly in order to make the movement smoother, it wouldn’t have felt the same.

That’s right. It just wouldn’t have.

But the way a game feels as you control it is deeply tied to the senses. How did you make it feel the same?

I set up the original Super Mario Bros. next to the one I was working on and compared them as I worked.

You lined them up and played each of them in turn?

Even though it was a product your own department had made? (laughs)

Thinking about that now, it seems rather primitive. (laughs)

The new controller had a lot to do with game operability.

Right. And while they had been side-by-side for the Famicom, they were now at an angle to each other, so we had to pay a great deal of attention to recreating the operability of the Famicom version. We had quite a debate over which of the four buttons to use for the controls.

Yeah, I guess pressing the B button to run (B-dash) and A to jump are the most basic of techniques in Super Mario. 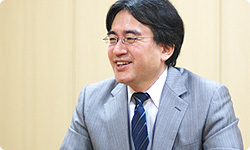 We really debated it. I remember that.

But this time, for Wii, you use the Wii Remote held sideways.

That way players should be able to enjoy operability similar to that of the Famicom.