Today, I have gathered together a group essential to the Super Mario series. Iwata Asks: SUPER MARIO 3D LAND Last time, your names came up, so today I would like to ask in more detail about the game.

We’re looking forward to it.

I’d like to jump right in. The Super Mario 3D Land game is finally going on sale. How did this project begin? 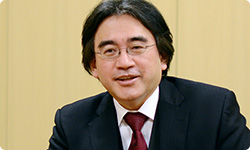 Last time in “Iwata Asks,” I heard that this project was Hayashida-san’s idea.

Yes, it was. We worked out the basic direction from summer to autumn the year that we finished Super Mario Galaxy 2.

In the autumn, we had a prototype with Mario running around, didn’t we?

Yes. But at that time, we had just put together something simple showing the relation between the player-character and the landforms. We made landforms, put in some Coins and Blocks, and had Mario move around among them.

Yes, that’s right. To be exact, we tested it by moving around a square block instead of Mario himself.

What? You moved around a Mushroom?

Everyone pretended it was Mario, but a Mushroom was jumping around on the screen. (laughs)

Really! What themes were you working with as you began making this game?

Early on, we established the theme of making a 3D Super Mario game that would be close to 2D so that anyone could play. One big difference between 2D and 3D is the camera. We made adjustments as we went to the parallel-track camera we used in Super Mario Galaxy 2 so it would be easy to play. 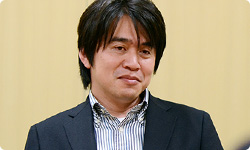 A parallel-track camera moves in parallel to Mario at a set distance.

Last time, we used the expression of Iwata Asks: SUPER MARIO 3D LAND. From the beginning, you conceived of this game as a good mixture of the appeal of both 2D and 3D Super Mario.

Yes. And while this may just be my own personal interest, I was incredibly curious about how Miyamoto-san and Tezuka-san had made Super Mario games in the past.

You study that a lot. You even have a collection of Miyamoto-san’s sayings.

Yes. I have it with me today!

There’s stuff in there even I don’t remember saying! (laughs)

I suppose so! (laughs)

After making Super Mario Galaxy 2, the latest 3D Super Mario game, you wondered if you could reflect 2D Super Mario development methods in a game for the newest hardware. Like an archaeologist, you unearthed the past.

Yes. (laughs) This may just be my own theory, but when I saw how Super Mario Sunshine5 was made, I thought that Koizumi-san is the type to probe into all sorts of new things one after another, and I, too, was enjoying creating new things with him - but, at the same time, I also believe that we need to continue to bring to future Super Mario games the unique fun of the old Super Mario titles that we played as children. I thought we should do a solid job of developing that sort of game. Oh...sorry to be so presumptuous! 5Super Mario Sunshine: An action game released for the Nintendo GameCube system in Japan in July 2002. 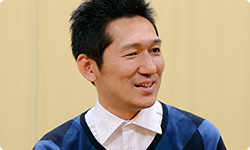 Not at all. It’s interesting - like a thesis paper. (laughs)

Sorry. (laughs) I wanted to convey to children today the fun that we had as children.

You wanted people today to experience the feeling of wonder that you once did.

Yes. That was my desire.