There was another advantage that came from using two screens.

At the very beginning, all we could display on the lower screen was a puny little boxer because when we made him bigger the image looked too rough. But we wanted to show an intense fight, so we tried zooming by 1.5 times. When we did that, it was unexpectedly hard to tell the difference. I was working together with Takeda-san to come up with mechanisms like this as we made the game. So the training from that time...

Became a good experience for you later in life as a game designer.

By the way, why were you involved with the development of the original Punch-Out!!?

At the time, I was in the Planning Department, which was the section that did design.

What kind of work were you doing there?

I did design for the entire company. I did advertisements, game design, and I went to any areas in the company that needed design work - I worked everywhere, so I was like a support staff member.

So when one department needed artwork, they would call you and you would go there and start drawing.

Back then, Takeda-san had been working as a game designer at Research and Development Department 3.

Right. Research and Development Department 3 made the entire game - from designing the substrate to making the software, but they didn’t have anyone on the staff to draw pictures.

That’s why they called you.

Well, at the time, it was still a small company. I was on the same floor as Takeda-san’s team, so I would often come and go.

What was the first project you worked on together?

I think it was Sheriff6, wasn’t it? 6 Sheriff: A shooting game where you fought sixteen desperadoes that surrounded you. Wario Ware Inc.: Minigame Mania (Game Boy Advance) featured it as a mini-game. 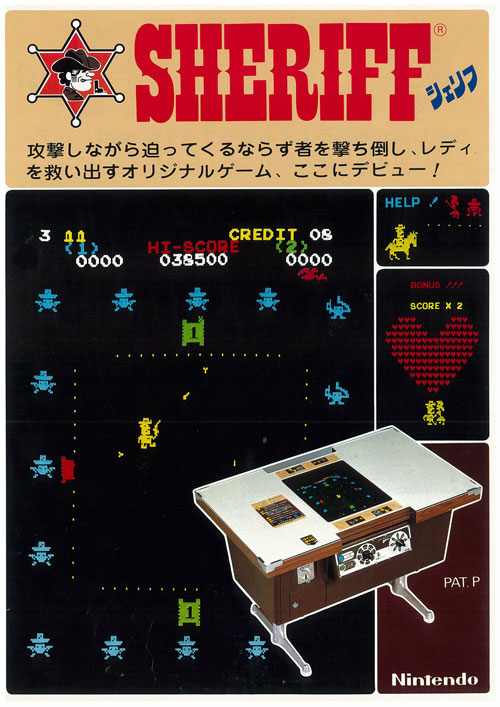 So the first time you worked together was on Sheriff? I used to play that a lot back then. (laughs)

I used to draw an audience at arcades in Kyoto. (laughs)

An audience? I’m sure your smooth demonstrations would draw an audience. (laughs)

By the time I noticed, there would be a huge group watching me and I would be really surprised. (laughs)

When we made Sheriff, I drew pixel images with another designer and we started searching for materials for the machine’s housing. We would talk about wanting to make a new unit that was like no other one in the world. So we even went to a company that did the interior of airplanes.

The interior of airplanes?

This company could make wood grain prints that looked like natural wood. So we bought these stickers and attached them to the cabinet and made it look like an old American saloon. At any rate, back then, I was doing all of the design from the content of the game to the housing.

Your background was industrial design, so you must’ve been good at that.

I enjoyed it. After that, Takeda-san made a shooting game called Space Firebird7 which came out next, and I drew all of the pictures of the characters. We made Popeye8 together as well, one year after Donkey Kong. 7 Space Firebird: An arcade shooting game released in 1980 where you shot down a "phoenix" that flew around space. 8 Popeye: An action arcade game released in 1982 where you control the popular cartoon character Popeye. A NES version was also released. 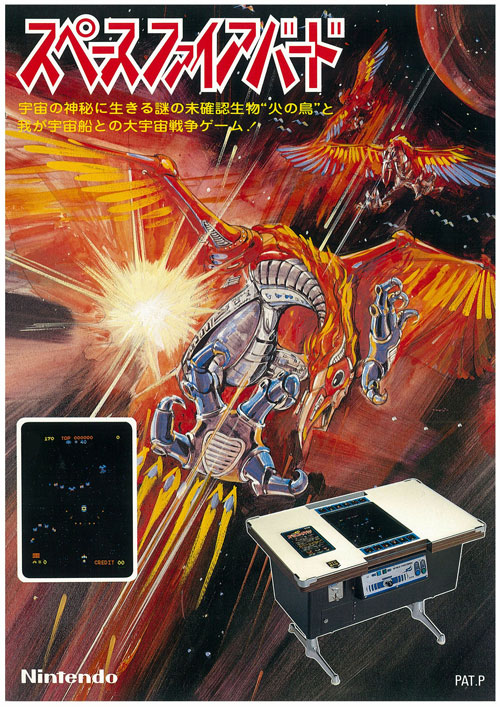 So that’s why Miyamoto-san naturally ended up involved in Punch-Out!!. By the way, how did the game design start on this game?

I was originally thinking of a realistic input device.

The first time I heard that, I was very surprised. He was saying boxing should be played with gloves on the player’s hands and that he would like to use an interface like a glove. As someone who plays video games I told him that I didn’t like ambiguous interfaces. Or ones that were hard to figure out. That’s why we decided to use a joystick and buttons to make it as easy as possible to understand. Then we made the framework for the gameplay and the picture patterns. But by then Takeda-san’s interest was already in a different direction. He started focusing on making the details of the game. He would say things like, this opponent’s weakness is his chin, so let’s call him

There was another advantage that came from using two screens.
"Glass Joe." He wasn’t even a designer. (laughs)
Everyone: 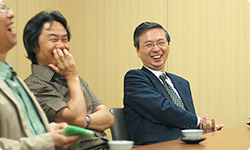 There is an opponent from Italy named Pizza Pasta. Did Takeda-san name him too?

That means that he sticks around and is hard to beat down.

Like the way cheese on pizza is sticky. (laughs) No matter how hard I try, I can’t make myself believe, that you, an engineer who excels at thinking about things extremely logically, came up with a name like Pizza Pasta. (laughs)

The reason I was so focused on the boxing gloves and the naming of the characters was because I had the American market in mind.

The American arcade game market was very big at that time.

It was, so the process involved making the game while keeping in very close contact with the staff at NOA (Nintendo of America). Back then, NOA only did marketing and sales, so I thought they might have a little interest in participating in development.

That wasn’t long after NOA had been established, right?

They’ve all moved up now, but then I asked the young staff members to do voices such as the referee’s voice, or the play-by-play.

In those days, the idea of voice actors in video games simply wasn’t around.

Also, America was really the centre of the boxing world, so I made sure to get a lot of input from the staff at NOA while making the game.

Did you send material under development to America and have people look at it?

There was no email then and you couldn’t send a substrate for a game very easily.

You had to get it through customs.

That’s why I remember sending images and specification sheets by fax.

Compared to now it was probably a lot more troublesome.

You demoed the gameplay?

Actually, it wasn’t me, it was Larry Holmes. (laughs) I had him sign some boxing gloves and they were always on display in the Research and Development 3’s room.

Did you bring those gloves here today?

No I didn’t bring them today, but I’m sure they are stored carefully somewhere. (laughs)