All right, Nakano-san. Among our various topics today, development of 3D Classics5 got off to the earliest start. 53D Classics: Classic games recreated in 3D available from Nintendo eShop.

Yeah. We started toward the end of 2009, so we've been working on it for a while.

How did you come to be in charge of it?

My boss said he wanted to recreate classic titles with a focus on stereoscopic graphics for the Nintendo 3DS system. I ended up collaborating with Arika6, since they have experience in a wide variety of fields and are an extremely reliable company when it comes to suggesting and implementing new methods of visual presentation. 6ARIKA CO., LTD.: A video game developer. Headquarters: Shinagawa-ku, Tokyo.

Several were suggested as candidates for becoming 3D Classics. What was the first one you made?

In developing 3D Classics with Arika, the first title that came up was Namco Bandai Games'

All right, Nakano-san. Among our various topics today, development of 3D Classics 5 got off to the earliest start. 5 3D Classics: Classic games recreated in 3D available from Nintendo eShop.
Xevious .7 7Xevious: An arcade shooting game developed by Namco (now Namco Bandai Games) that appeared in 1983.
Iwata:

That was because we ourselves wanted to see it in 3D. Especially, Solvalou8 floating in midair! (laughs) 8Solvalou: The ship that players pilot in Xevious. It is an advanced fighter-bomber in a military defence force.

Uh-huh! We based the 3D version on the arcade game. With a 2D screen, players had to use their imagination for Solvalou flying above the ground, but on the Nintendo 3DS system, we thought we might be able to recreate it using stereoscopic graphics so it looked like it was really floating.

But when you started making it, you ran into a lot of difficulties.

Yes, that's right. In the original version, the game unfolds on a flat surface. The moment we made Solvalou float in midair, all sorts of discrepancies arose. For example, when an enemy on the ground fired at Solvalou in the original, everything was on the same plane, so it didn't seem unusual if the bomb appeared at the same altitude as Solvalou the moment it was fired and then hit Solvalou right away. But with the Nintendo 3DS system, Solvalou is floating in midair. If the bomb suddenly appears - zhing! - at the same altitude as Solvalou… We were like, "Huh? Something doesn't feel right!" (laughs) Everything was off! 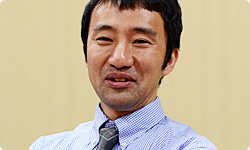 When you took a 2D game enhanced into 3D by the player's imagination and made it an actual 3D game, nothing felt right.

Yeah. For the same reason, when Solvalou fired at surface opponents, the bombs would strike the same instant they were fired. (laughs) A lot was off simply at a glance.

But if you try to make that look natural, then the game elements don’t work properly.

Exactly! The actual game was made in 2D, so the bombs strike Solvalou the moment they're fired. But for the Nintendo 3DS system, we had to create an interval between when they are fired and when they strike. There were all kinds of discrepancies like that. It was a big challenge making something that would satisfy fans of the original and provide a fresh surprise on the Nintendo 3DS system.

So at first it looked like you would merely port it, but it actually turned out to be a lot of work! (laughs) I would guess it was about 20 times the work of merely porting it?

That's about right. That was a bit frustrating. (laughs) If you look closely, you will probably notice that we actually had Arika redo the graphics and programming from scratch.

And you didn't just create a 3D world from scratch, but when you move the 3D depth slider down, it transitions smoothly to the old 2D graphics. That must have been an incredible task!

It was! We spared no effort! (laughs) At first, since it was new hardware, we tried making the graphics richer, but that didn't impress much.

Yeah. Miyamoto-san and I both said, "Put it back the way it was!" (laughs) 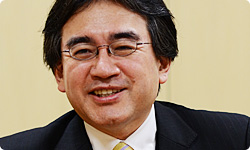 Everyone has strong memories of Xevious. The most impressive moment is when Solvalou lifts off.

Let's see… One game that didn't go well was Tennis for the Famicom.9 The tennis court originally in the background had perspective, so I thought we could simply shift it to 3D. But we had originally created that screen to have a three-dimensional effect in 2D, so in real 3D imaging, it wasn't very surprising. I thought, "That's totally normal!" (laughs) 9Tennis for the Famicom: A sports game released for the Family Computer (Famicom) system in 1984 in Japan.

It was surprising how unsurprising it was. (laughs)

Yeah. (laughs) And a programming problem arose after changing the collision detection for the ball and racket from a plane to a 3D field. It took as much work as making a tennis game from scratch. If there would be the surprise of seeing it become 3D, we might want to make it, but we had to conclude that the resultant value would not be worth our hard work, so we scrapped it.

It was too underwhelming, so it went into the bin.

Yeah. In addition to Xevious,

All right, Nakano-san. Among our various topics today, development of 3D Classics 5 got off to the earliest start. 5 3D Classics: Classic games recreated in 3D available from Nintendo eShop.
Excitebike 10 is an example of a title that went well. 10Excitebike: A racing game released for the Family Computer (Famicom) system in 1984 in Japan.
Iwata:

3D Classics: Excitebike will be a free download for a limited period of time to commemorate the opening of Nintendo eShop. Editor's note: The free offer expired on July 7th, 2011. It is now available at a cost from Nintendo eShop.

Yeah. The new 3D Classics: Excitebike doesn't just create a sense of depth by layering the characters and background. If you turn the 3D depth slider up, the incredibly three-dimensional world with perspective that opens before you will knock your socks off!

Yes, that's a little mysterious. Originally, Excitebike used orthographic projection, which creates a three-dimensional effect by showing objects at an angle without causing scenes and persons in the distance to look smaller. In 3D, the world really expands, so I hope people with a Nintendo 3DS system will make use of the free download to experience it.

Yes, definitely. I hope they will download it during the promotional campaign.

Altogether, how many 3D Classics did you make?

We're currently making six. Release of Xevious and Excitebike is slated for June 7. I hope everyone will look forward to those titles, as well as the others. Editor’s note: In Europe, 3D Classics: Excitebike launched on June 7 and 3D Classics: Xevious will be released in July.

How did you choose those titles? The balance between how good they look in 3D and how hard they will be to make is important.

That's right. And if you don't possess a certain degree of familiarity with the original game, you won't sense the extent of change to the 3D version, so you have to have both. Some titles were minor but looked good in 3D, while others were incredibly major games but didn't work out well, so we chose those that presented the best of both worlds.