With Flipnote Studio, you don't just view and evaluate others' creations, you can also rework them.

In other words, cooperation, not just competition.

Right. You can just add sound, or only pictures, or only words to what someone else has made. There are a variety of ways to participate. For example, someone who isn't good at drawing may post something composed only of words. Someone else may see it, download it, and decide to add voice, or pictures, make their own additions, and then upload the new version. Then someone may see that new version and decide to add in his or her own illustrations. The original work may pass through numerous hands and end up as something that was unimaginable at the start.

If lots of people alter it, then won't it be impossible to tell whom it belongs to?

The original creator's name will be kept on file. As others download the animation and alter it, their names will be added as collaborators to a sort of credits list, which will be viewable. I think everyone will be happy to see their participation kept on record like that. 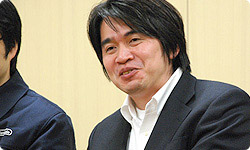 Even though the original creator won't change, the creation may end a different way. So the person who threw out the first idea will be extremely interested in how it turned out in the end. You won't just upload something and then forget about it, you'll be checking in on it all the time.

So the animations' narratives also move.

I'm looking forward to seeing the animations grow and branch out like a family history until bam - you've got a big tree! 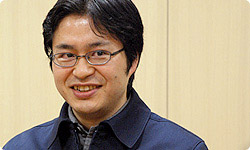 The original creator will be a kind of family ancestor! (laughs) So, what do you have in store for Flipnote Studio from now on?

There's so much we want to do, so it could be quite a while before it all gets done. First, we want to release it this year, with Hatena starting up its Flipnote Hatena service at the same time.

When service actually starts, there will be lots of submissions, and we'll begin to see what will be there to make it more fun. Once that's happened, I want to add new services, release Flipnote Studio Version 2, and reflect in it what we've found that makes Flipnote Studio more interesting. We also plan to introduce the credits list function I mentioned earlier. After that, I want to open it to the whole world so people everywhere can view and evaluate a wide variety of animation.

What do you envision happening for you to call it a success?

To tell you the truth, I have no idea what kind of animation will be submitted once the software is released. That's because, as I've been working together with Kondo-san, animation far surpassing anything we ever expected has shown up. For example, notes like diary entries composed entirely of words, and unique creations, using photos, that can't really be called flick book animation.

Yes. I want the whole genre to be called Flipnote.

So you would consider it a success if Flipnote as a proper noun fell into common use.

Right. My true wish is that groups of works in a variety of expressive forms will come to be referred to as Flipnote, and that hidden talents all over the world will use Flipnote as a stage for displaying their skills.

How do you imagine success for Flipnote Studio, Kondo-san?

Version 1 of Flipnote Studio is fairly pared down, so all you can do is upload posts from your Nintendo DSi, and view new posts and the popularity ranking on the web. It isn't anything that incredible.

That's partially because of scheduling constraints, but because it's so simple and doesn't have its own distinct flavour, I'm looking forward to seeing a lot of posts that completely blow away my expectations.

Yes, they do. As a way of categorising the animation, we're planning different "channels." For example, stick people. In other words, we think a lot of people will use simple lines to draw animations of people. So we're going to prepare channels, like a Stick Person Channel, for example. Those categories will start on Ugomemo Hatena and then be available for Nintendo DSi with Version 2. Also, we want the animation to be downloadable to mobile phones so you can enjoy Flipnote anywhere, anytime.

Ninomiya-san, as a designer, do you have a different viewpoint on this?

In 2007, we released a service called Hatena Haiku that allowed anyone to easily use their mouse to draw a picture and post it, but drawing pictures with a mouse is a kind of constraint.

The Nintendo DSi, however, has a stylus, so you can draw pictures more easily, and with Nintendo DSi Camera you can easily take photos and add them straight into what you're making, so I feel that we will be able to reach a point that we couldn't have on our own*.

*(*Editor’s Note: Features using the Nintendo DSi Camera are different from the Japanese and European versions.) 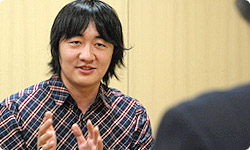 Also, I think we will see personal computer users and Nintendo DSi users mixing with each other. People who until now have had nothing to do with Hatena before will encounter it, and people who have never had a game console will take an interest in the Nintendo DSi. I'm hoping that these two different groups will encounter each other through Flipnote to create a world we've never seen before. 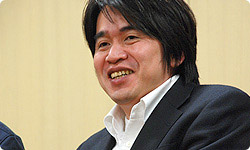 Kondo-san, you're an engineer, but as a leader at Hatena, you have to look after the business side of things as well. When setting foot in unexplored territory, such as with this project, you can't simply say, "We're doing it because it's fun." It's the same for me. (laughs)

Even when you don't know whether something will succeed or fail until it's released, you still take certain objectives to heart and make decisions based on them. What would those be for you this time?

As I've worked on Hatena, I've assumed that the Internet will continue to change people's lives. But people around the world are still not making full use of it.

You feel most people are unaware of the Internet's true potential and only use its superficial aspects, when it should be able to change the world for the better? 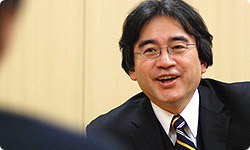 Right. For example, consider all the people out there you see riding the train. For every ten people, probably only one or two make good use of the Internet every day. I think that from now on, the Internet is going to change our lifestyles in fundamental ways, but I have a vague feeling that as it exists right now, it hasn't reached a point where everyone finds it accessible.

That's why, to tell you the truth, when it came to this project I sensed unexplored territory out there. But as for what will happen when video game players get on the Net...

Right. We don't know. It's unknown territory for us, so maybe it will offer up clues to services that we, as an Internet company, should provide. That's why I thought there was value in accepting the challenge and seeing what happens. But if you asked me how much profit we expect from this project, I'd have to say I don't know. (laughs) 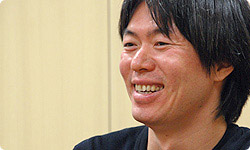 We take the approach that we want to do everything we can. Especially since we've come all the way to Kyoto.

I'm excited about this, too. Until recently it's often been said that the video game world is somewhat closed, so when that world enters the extremely open world of the Internet, I wonder how it will reach people around the world and how they will use it.

I feel the same way. More than unsure, I'm excited.

Is there anything else you may have forgotten to mention?

My son is in the second grade of elementary school. I've been working all this time on Internet services, but my son has never touched a single one of them.

I suppose he's still too young.

But I think this may be the first service I've made that he will use. I'm really looking forward to that. 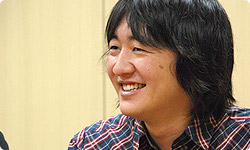 What a nice thought. (laughs)

I think from now on the relationship between Nintendo's game consoles and the Internet will deepen now that there's a way for people to easily bring their ideas to life and present them to others - the same way that today they fire off emails right and left. Flipnote Studio can be a place where people share their creations with each other and offer each other applause.

I would love it if Flipnote Studio led the way for software making it possible for people to share their creativity in that way. Everyone, let's give it our best! (laughs) Thank you for sharing your thoughts today.